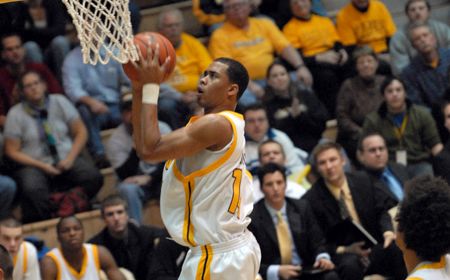 Howard Little, who makes his return to Chicago where he played his high school basketball, has led the Crusaders in scoring two out of the last four games.
#1/1 North Carolina at Valparaiso | December 20, 2008
Related Links
Related Links

The Matchup: For the third time in seven seasons, Valparaiso takes to the home court of the NBA’s Chicago Bulls, hosting current unanimous #1/1 North Carolina in Chicago’s United Center.  Valpo has dropped six of its last seven, while North Carolina has won nine straight to start the 2008-09 campaign.

Series History: Behind a career-best 24 points from senior guard Jarryd Loyd, Valparaiso fought back from an early 17-point deficit and briefly tied the game three minutes into the second half at 37, but top-ranked North Carolina pulled away from there, utilizing a 27-2 run to eventually down the Crusaders, 90-58, Dec. 30, 2007 in Chapel Hill, N.C in the first meeting between the two schools.  Loyd knocked down 9-of-17 shots from the floor for his career-high scoring total, including a career-best five 3-pointers.  He was the only Crusader to reach double figures, however, as Samuel Haanpää was the next-highest Valpo scorer with nine points.  Michael Rogers added eight points and four rebounds in six minutes of action.  Tyler Hansbrough led North Carolina with 23 points and 13 rebounds, including a 9-of-10 effort from the free throw line.

Last Time Out: Valparaiso was within one point of Miami for a five-minute stretch of the second half and cut the RedHawks’ lead to three points with 7:49 remaining, but the Crusaders could not take the advantage, as Miami held off all of Valpo’s advances for a 62-50 victory Saturday afternoon in Oxford, Ohio.  Jake Diebler and Michael Rogers tied for Crusader team-high scoring honors with ten points apiece.  Valpo connected on 51.3% of its field goal attempts (20-of-39), just the second time this season it has been better than 50% from the floor.  Michael Bramos connected on 6-of-9 from behind the arc on his way to a game-high 28 points for the RedHawks.

Following the Crusaders:  Today’s game can be heard live on the Valpo Sports Radio Network, a four-station entity carrying Crusader athletics all over Northwest Indiana.  Originiating from WVUR, 95.1 FM in Valparaiso, the VSRN also includes WEFM, 95.9 FM, Michigan City; WAKE, 1500 AM, Valparaiso; and WWLO, 89.1 FM, Lowell.  Veteran broadcaster Todd Ickow returns for his 18th season on play-by-play for the Crusaders, while WVUR’s David Schroeder will handle the color commentary.  The game will also be televised live on ESPNU, with Clay Matvick and Dickey Simpkins on the call.  Ickow and Schroeder’s audio is also available online at www.valpoathletics.com.

Taking On the Best: With North Carolina entering Saturday’s matchup as the unanimous #1 team in the nation, it marks the fifth consecutive year that the Crusaders have taken on the nation’s top-ranked program.  The Crusaders faced the Tar Heels in Chapel Hill Dec. 30, 2007, Ohio State in Columbus on Dec. 2, 2006, Duke in Durham on Dec. 18, 2005 and Illinois in Champaign on Dec. 19, 2004.  Prior to this stretch, Valpo had played the top-ranked team in the nation just twice in its history, hosting DePaul on Feb. 13, 1980 and traveling to Houston on Feb. 24, 1968.  Valpo is 0-6 all-time against #1 teams.

United Center History: This marks Valpo’s third appearance on the hardwood at the United Center.  The Crusaders nearly pulled off one of the biggest upsets in school history on Jan. 4, 2003 when they hosted #6 Notre Dame in Chicago, losing 55-53 only when Greg Tonagel’s 3-point attempt from the right wing came up just short at the buzzer.  Valpo also brought then-#10 Duke to the United Center on Dec. 4, 2004, a game which the Blue Devils went on to win, 93-61.

National Audience Awaits Valpo: After appearing on national television seven times during the 2007-08 campaign, Valparaiso will make at least three nationally televised appearances during the 2008-09 season.  Today’s game against UNC will be the first-such game of the season, with a live broadcast on ESPNU.  The Crusaders’ Dec. 28 contest at Purdue will be broadcast on the Big Ten Network, while their Jan. 30 league tilt at Butler will be carried on ESPNU.

Drew Closing In on 600: In his 32nd season as a collegiate head coach and his 20th year at Valpo, Crusader head coach Homer Drew is just four wins shy of his 600th career win.  Drew would become just the seventh active coach in Division I with at least 600 wins and just the 33rd coach in NCAA Division I history to reach the milestone.

Either Hot or Cold: The Valparaiso offense hasn’t had much in-between so far in the 2008-09 season.  In five of their first nine games, the Crusaders have hit better than 45% of their shots from the field, going 3-2 in those contests.  But three times, Valpo has shot worse than 32%, resulting in its three double-digit losses.

Spreading Out the Scoring: The Crusaders have had a variety of different players contribute in the scoring column during the early stages of the season.  Seven different players are averaging between 6.0 and 10.0 points per game for Valpo.  In addition, eight players have also scored in double figures at least once so far this year for Valpo, including four players (Buggs, Fumey, Haskins, Witt) who are in their first season on the court and two more (Little, Rogers) who are in just their second season.

Success Right Around the Corner?: While the Crusaders have dropped six of their contests, there is recent precedent for a sustained string of success immediately following a rough stretch.  Last season, Valpo lost six of seven games from Jan. 26-Feb. 20 before reeling off six consecutive victories, while the year prior, the Crusaders fell eight straight times (Nov. 21-Dec. 22) and rebounded to win seven of their next nine games.

Big Man With a Career High: Preseason Second Team All-Horizon League selection Urule Igbavboa was placed on the preseason All-Horizon League Second Team after his stellar junior campaign.  The senior forward showed his proficiency at both ends of the floor on Dec. 4 at Youngstown State, helping the Crusaders rally from a 14-point deficit with a career-high 27 point effort, also grabbing nine rebounds.  Igbavboa hit nine of his 15 attempts from the floor and drained 9-of-11 free throws on the game.  This year, the senior leads Valparaiso in both scoring (10.0 ppg) and rebounding (5.9 rpg).

The Un-Masked Man: Playing without his trademark mask this season, senior guard Jake Diebler has continued to play his trademark style of basketball in his final year.  Diebler nearly put up a new career high Dec. 4 at Youngstown State, matching his career best with four triples on his way to 15 points.  Last time out at Miami, the senior tied for team-high scoring honors with ten points.  He also currently leads the team with 14 steals on the season.

Rogers Produces Night After Night: Sophomore guard Michael Rogers has stepped into a regular starting role this year after starting each of the last nine games of the season as a freshman.  The 6’5” Jamaican is currently second on the team in scoring, averaging 9.7 ppg, and has scored at least eight points in eight of Valpo’s nine games.  He also has contributed on the boards, currently ranking third on the Crusaders with 4.3 rpg.