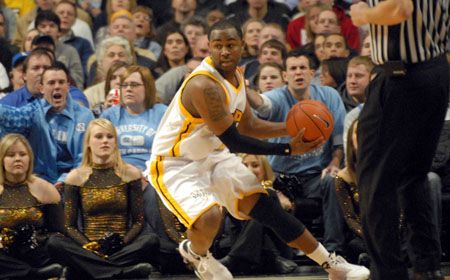 Valparaiso’s second unit sparked a 19-3 run midway through the first half to rally the Crusaders from an early deficit and put them in position for a halftime tie, but #25/RV Butler came out of the break on a 19-4 run and went on to post a 75-62 victory over Valpo Saturday evening at the Athletics-Recreation Center.

Senior guard Brandon McPherson (Indianapolis, Ind./Lawrence North), who had played just three games all season due to injury prior to tonight, led the Crusaders with an inspired effort off the bench, going for 22 points in just 23 minutes of action.  Senior forward Urule Igbavboa (Oakdale, Minn./Tartan) added 17 points on 6-of-8 shooting and also grabbed seven rebounds.

“I really liked what the five we subbed in brought in the first half,” said Crusader head coach Homer Drew.  “They got us going on both ends of the court, making some big shots on offense and forcing quite a few turnovers on the defensive side.”

The early going was back-and-forth until Willie Veasley knocked down two triples in a three-possession span to spark an 8-0 Bulldog spurt, enabling them to pull ahead 17-8 with 12:27 to go in the opening half.  Drew subbed out his entire starting five at that point, completely changing the momentum of the game.

De’Andre Haskins (Long Beach, Calif./La Lumiere [Ind.] School) got it started with a 3-pointer to pull Valpo within six, and then McPherson took over.  The senior knocked down two free throws, and following a Shelvin Mack three, connected on a long jumper to cut the deficit to just five points.

Logan Jones (Madison, Ind./Madison) came up with a steal on the next defensive possession and took the ball coast-to-coast for an old-fashioned 3-point play.  Another steal, this time by Haskins, returned possession to the Crusaders and the freshman found McPherson for a triple to give Valpo the 21-20 advantage, its first lead since the early stages.

The starters re-entered the contest and continued to hold the momentum, as Igbavboa got loose for a layup and Howard Little (Chicago, Ill./Stoneridge [Calif.] School) connected on his second 3-pointer of the game.  By the time Igbavboa added a free throw to close out the 19-3 run, the Crusaders had taken a 27-20 lead with just 5:59 remaining in the half.

Grant Leiendecker ended the Valpo run with a 3-pointer, and Veasley hit five straight points to give the lead back to the Bulldogs.  Another Leiendecker triple extended the advantage to four, but McPherson answered with yet another 3-pointer and Igbavboa added a free throw prior to the end of the half to send the game into the break at 31 apiece.

The Crusaders would be unable to take the lead outright at any point in the second half, however.  Butler came out of halftime on a 19-4 run over the first 8:37, getting ten points from Matt Howard and nine from Gordon Hayward during the spurt.  By the time Igbavboa ended the run with a layup with 11:23 remaining, Butler had a 15-point advantage.

Valpo had one last spurt left in it, however.  Trailing by 15 with under nine minutes to play, Igbavboa converted another layup, Jones came up with a steal and fed McPherson for a fast-break 3-point play to quickly cut the deficit to ten points.  The Crusaders would get the lead down to eight on a McPherson triple with 7:28 remaining and get to as close as six points on a pair of free throws with 5:04 left, but Shelvin Mack knocked down a 3-pointer on Butler’s next trip to thwart the comeback attempt.

McPherson connected on six of his ten field goal attempts, including three 3-pointers, and knocked down 7-of-8 from the charity stripe for his game-high point total, but he and Igbavboa were the only Crusaders in double figures.  Jones chipped in five points, four assists and two steals without a turnover off the bench.

Butler (12-1, 3-0 Horizon) had four starters reach double figures in the scoring column, led by 16 points from Howard.  Hayward and Veasley each registered 15 points, with the former also pulling down a game-high 13 rebounds.

“We need to do a better job rebounding the ball, as that was the big difference tonight,” said Drew.  “They out-rebounded us by 14, got ten offensive rebounds and we gave up 13 second-chance points.”

Valparaiso (4-10, 1-2 Horizon) gets another shot at a league foe on Monday, as the Crusaders travel to Milwaukee, which sits atop the standings at 4-0.  The game is slated for a 7 p.m. tip, and as always, all the action can be heard live on the Valpo Sports Radio Network (WVUR, 95.1 FM, Valparaiso; WAKE, 1500 AM, Valparaiso; WEFM, 95.9 FM, Michigan City; WWLO, 89.1 FM, Lowell) and online at www.valpoathletics.com.  Live video and statistics will also be available through the official Crusader website.