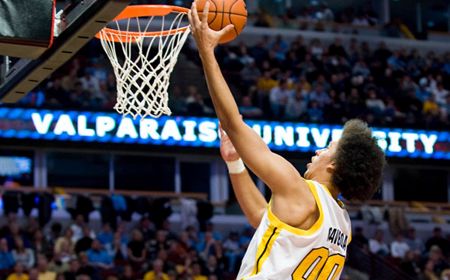 The Matchup: Valparaiso kicks off a three-game homestand to close out the regular season on Saturday night, hosting Akron in a non-conference matchup.

Series History: The Zips and Crusaders have met just four times in program history, all within a two-year span when both programs were members of the Mid-Continent Conference.  Akron earned wins in all four matchups, including most recently a 64-60 victory in Akron on Feb. 22, 1992.  The Crusaders led by two at the break in that contest, but the Zips scored the first 12 points of the second half and never trailed again.  Tracy Gipson registered a double-double with 19 points and ten rebounds for Valpo, while Lance Barker scored 15 points and Joel Beesley added 13 off the bench.

Last Time Out: Valparaiso was within one point at the half at the Horizon League’s second-place team in Green Bay Wednesday evening, but the Phoenix took advantage of ten Crusader second-half turnovers, scoring 19 points off the miscues in the final 20 minutes to pull away for a 76-61 victory.  Urule Igbavboa led the Crusaders with 15 points on just five field goal attempts, knocking down both of his shots from behind the arc, while Michael Rogers added 13 points and six rebounds off the bench.  Cameron Witt pulled down a game-high seven rebounds in his fifth start of the year.  All five Green Bay starters ended the game in double figures in the scoring column, paced by 17 points from Terry Evans.

Following the Crusaders:  Today’s game can be heard live on the Valpo Sports Radio Network, a three-station entity carrying Crusader athletics all over Northwest Indiana.  Originiating from WVUR, 95.1 FM in Valparaiso, the VSRN also includes WEFM, 95.9 FM, Michigan City; and WAKE, 1500 AM, Valparaiso.  Veteran broadcaster Todd Ickow returns for his 18th season on play-by-play for the Crusaders, while WVUR’s David Schroeder will handle the color commentary.  Live audio will also be available online at www.valpoathletics.com, which will also have links for live stats and video through the Horizon League Network.

Homer Reaches 600: Crusader head coach Homer Drew reached a rare milestone last Friday with Valpo’s win over Loyola, winning as head coach for the 600th time in his career.  Drew became the eighth current Division I head coach (at least five years DI experience) to reach the 600-win milestone, and is just the 32nd Division I coach all-time (at least ten years D1 experience) to reach the plateau.  Drew is in his 32nd year as a collegiate coach and his 20th overall at Valparaiso.  He earned 252 wins during an 11-year stint to open his head coaching career at Bethel [Ind.], won 17 games in one season at the helm of IU-South Bend, and has won 331 contests to date at Valpo.

The Comforts of Home: The Crusader offense has been much more successful at home this year than when it steps away from the Athletics-Recreation Center.  Valpo is scoring 67.3 ppg at home vs. 56.2 ppg away from home, and is shooting over five percent better both from the field and from behind the 3-point arc.  The offensive output at the ARC is a key reason that the Crusaders are 6-5 at home this year and need just one more win to secure their 16th straight season at .500 or better at home.

One Streak Continues, Another Ends: Senior guard Jake Diebler set a new Valpo Division I record last Friday evening, making his 92nd straight start for the Crusaders, surpassing former Crusader great Dan Oppland.    The senior has started every single game since the beginning of his sophomore year, now 94 and counting.  Diebler also had his streak of consecutive minutes played, believed to be a Crusader all-time record, broken at 278 when he was removed with 1:41 to play against the Ramblers.  He had not come off the floor since the end of the UIC game Jan. 15.

National Audience Watches Valpo: After appearing on national television seven times during the 2007-08 campaign, Valparaiso has made three national TV appearances this year.  Valpo was featured in a showdown with top-ranked North Carolina on ESPNU on Dec. 20.  The Crusaders’ contest at Purdue Dec. 28 was broadcast on the Big Ten Network, while their game last Friday evening at Butler was shown live on ESPNU as well.

Igbavboa Leads the Way: Senior forward Urule Igbavboa led Valpo in scoring last time out against Green Bay, going for 15 points.  Previously, he paced the Crusaders in all five major offensive categories against UIC, tallying 20 points, seven rebounds, four assists, two blocked shots and two steals.  It continues a trend for Igbavboa, who has always excelled in the scoring and rebounding departments for Valpo, but has added the role of offensive distributor to his resume this year.  He currently leads the Crusaders in scoring (12.0 ppg) and rebounding (5.6 rpg).  He also paces Valpo in league play in assists (2.9 apg) and is tied for seventh in the Horizon League in league games in the category.

Little Getting it Done: Sophomore guard Howard Little has now scored in double figures in eight of Valpo’s last ten games after his team-leading 17 points last Friday against Loyola and putting up 13 points versus UIC.  He just missed reaching double figures again last time out at Green Bay, scoring nine points.  Second on the team in scoring (9.7 ppg) and rebounding (4.9 rpg), Little ranks second in the league in 3-point percentage (.429) and eighth in field goal percentage (.463).

Rogers Produces Off the Bench: Sophomore guard Michael Rogers has made an impact in the last three games coming off the bench for the Crusaders.  While at this point as a freshman he was inserted into the starting lineup, he has been rejuvenated this year by moving to a sixth-man role recently, averaging 14.7 points and 6.0 rebounds per game over the last three games.  Overall, he is third on the team in scoring (9.4 ppg) and second in rebounding (4.9 rpg)