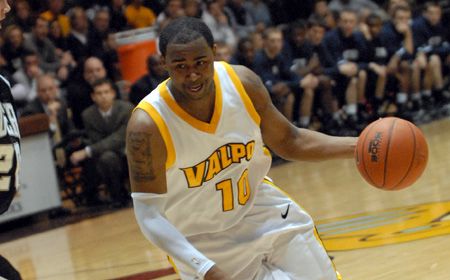 The Matchup: The 2009-2010 regular season begins for the Crusaders Friday night, as Valparaiso travels to Muncie to take on in-state rival Ball State.  The Crusaders and Cardinals have a history dating back to the 1927-1928 season, with Ball State owning a slight 30-27 lead in the all-time series.

Last Meeting: Valparaiso used four 3-pointers in a five-possession span in the second half to pull away from Ball State en route to a 71-58 victory at the ARC on December 1, 2007.  The Crusaders had seen a 13-point halftime lead cut down to as few as four points before going on their shooting barrage to put the game out of reach.  Shawn Huff led all players with 17 points, including five 3-pointers, while Samuel Haanpaa also knocked down a quintet of triples for 15 points.  Urule Igbavboa added 13 points while also pulling down a game-best nine rebounds.

Last Time Out: A high-scoring affair did not go the Crusaders’ way, as Valpo dropped its only offical exhibition game on Nov. 1 at the ARC to Indianapolis, 88-81.  The Crusaders trailed by 16 at one point during the second half and nearly fought all the way back with a 13-2 run to close within one point with 5:21 to play, but could not regain the lead.  Valpo was led by 19 points on 7-of-10 shooting from Michael Rogers, while Brandon McPherson added 15 points and Howard Little 13 points.

Following the Crusaders:  Today’s game can be heard live on the Valpo Sports Radio Network on WEFM (95.9 FM, Michigan City) and WAKE (1500 AM, Valparaiso).  Veteran broadcaster Todd Ickow returns for his 19th season on play-by-play for the Crusaders, while Valpo alumnus Andy Viano will handle the color commentary.  Valpo’s student radio station, WVUR (95.1 FM, Valparaiso) will also be broadcasting the game online through www.sportsjuice.com, with David Schroeder and Chris Kleinhans-Schulz on the call.  The game will also be televised on various Indiana stations through the Ball State Sports Network.  Links for the VSRN live audio, as well as live statistics, will be available at www.valpoathletics.com.

Lots of New Faces: The 2009-2010 Crusader basketball team had a very different look to it when it stepped on the floor for the first time this year in the exhibition contest against Indianapolis.  Just four of the 11 players who saw action versus the Greyhounds played regularly last year for Valpo, while Brandon McPherson saw limited action due to injury.  Six players were making their debuts in a Crusader uniform as well.

Hitting the Road Right Away: This year’s Crusader squad is starting out with a road game for the first time since the 2005-2006 season, when Valpo opened the regular season slate at IPFW.  In fact, last year’s squad did not play a true road game until December 2.

Winning Openers: Valpo is looking to win its season opener this year for the fifth straight year.  The Crusaders won at IPFW to open the 2005-2006 season and have earned double-figure home victories to begin play each of the last three years.

Hitting From the Charity Stripe: Last year’s Crusader team struggled from the free throw line, hitting just 61.2% of its free throw attempts on the season.  But in its exhibition game against Indianapolis, Valpo looked like a whole different team from the line, connecting on 23-of-30 (76.7%) from the foul line.  Seven different players found their way to the line against the Greyhounds, led by an 8-of-9 effort from Howard Little.

Looking at the Schedule: This year’s Crusaders will be extremely battle-tested prior to hitting the heart of Horizon League play.  Just two days after the opener at Ball State, Valpo will play at #6/4 North Carolina.  One week later, it’s #2/2 Michigan State that the Crusaders travel to take on.  The one weekend of Horizon League play in early December sees Valpo play at #11/10 Butler, while four days later, there’s another road game at #7/7 Purdue.  In all, of the Crusaders’ first 13 games, eight are true road games with a pair of neutral-site contests as well.

Tabbed Eighth: The Crusader men’s basketball team has been picked to finish eighth in the Horizon League for the 2009-2010 season, according to polling of the league’s head coaches, sports information directors and media members.  Butler has been tabbed the preseason favorite with 43 of the possible 46 first-place votes.  Wright State was picked second with defending tournament champion Cleveland State projected third.  Milwaukee, Green Bay, Detroit and Youngstown State were picked fourth through seventh, respectively, while UIC and Loyola rounded out the polling.

McPherson Back in Action: Fifth-year senior guard Brandon McPherson was unable to play the entirety of last season after offseason surgery, competing in just five games before having to sit out the remainder of the year.  McPherson returned to action at the ARC in the Crusaders’ exhibition game against Indianapolis, starting and playing 23 minutes while scoring 15 points on 6-of-12 shooting from the field.  McPherson enters his final season among the Crusaders’ career leaders in assists (215, 18th) and 3-point shooting (40.9%, t-8th).

Rogers Leads the Way: Junior guard Michael Rogers led the Crusaders in scoring eight times as a sophomore and will be asked to shoulder more of the scoring load this year with the graduation of leading scorer Urule Igbavboa from last year’s team.  Rogers did just that in the Crusaders’ exhibition contest, scoring a team-best 19 points in efficient fashion in 26 minutes of play, hitting 7-of-10 shots from the field, including 3-of-5 from behind the arc.  He also crashed the offensive glass, pulling down four offensive rebounds.

Doing the Little Things: Junior guard Howard Little ranked among the Crusaders’ top rebounders last season and did so again in exhibition play, tying for team-high honors with five rebounds while also scoring 13 points.  He especially stood out from the free throw line, connecting on 8-of-9 attempts from the charity stripe after hitting just 54.5% from the free throw line as a sophomore.

Newcomers Earning Starts...: The remainder of the Crusader starting lineup in exhibition play was filled by a pair of newcomers.  Redshirt junior forward Cory Johnson scored eight points and grabbed four rebounds in his first action in a Valpo uniform, while redshirt sophomore guard Brandon Wood led all players with five assists to go along with eight points and three rebounds.

...and Coming Off the Bench: Four other newcomers to the Valpo roster made their first appearance as a Crusader in the exhibiton game against Indianapolis as well.  Freshman guards Ryan Broekhoff and Matt Kenney each saw 16 minutes of action, with Broekhoff scoring eight points while Kenney contributed five points and two rebounds.  Freshman guard Tommy Kurth played four minutes in his debut as a Valpo player, while sophomore forward Milos Milosevic grabbed a rebound and recorded a steal in three minutes of action.