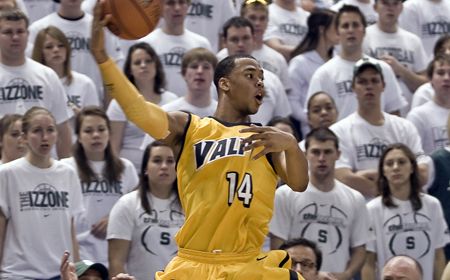 “You have to give credit to Michigan State,” said Crusader head coach Homer Drew.  “You can see why they’re ranked #2 in the nation.  They’ve got one of the best sets of guards in the nation, and they also have a number of big, strong post players who are very difficult to rebound against.”

Michigan State scored the first five points of the game, but Wood responded immediately with a long jumper followed by a 3-pointer to tie things up at five.  The Spartans then commenced to hold Valpo to just one field goal over the next 9:45, going on a 24-6 run over the stretch to extend their advantage out to 29-11.

MSU would continue to push its lead all the way up to 24 points in the first half, reaching a 46-22 edge with 2:05 to play in the opening stanza.  The Crusaders went into the break on a mini-run, however, as Cory Johnson (Duluth, Minn./Duluth East [Iowa State]) converted a three-point play and Wood knocked down three free throws as Valpo scored the final six points of the half to go into the locker room down 46-28.

Out of halftime, the Spartans struck first with a putback basket, but Valpo got layups by Johnson and Wood and a free throw from Brandon McPherson (Indianapolis, Ind./Lawrence North) to cut the deficit to 15 points with 16:29 to play.  A 9-2 spurt by MSU extended its lead back up to 22, and while the Crusaders were able to get back to within 19 points twice, the second of which came at 66-47 with 8:52 remaining, the Spartans put together one more big run, outscoring Valpo 13-3 over the next three-plus minutes to put the game away.

Wood converted on 7-of-18 shooting from the field and stepped up at the foul line, making 9-of-10 free throw attempts, for his game-high scoring total of 24 points.  Johnson was the only other Crusader to reach double figures, going for 16 points.  Howard Little (Chicago, Ill./Stoneridge [Calif.] School) led Valpo in the rebounding category, pulling down six rebounds, including five on the offensive end.  The Crusaders connected on just 21-of-64 (32.8%) field goal attempts and hit just 4-of-23 (17.4%) from behind the arc, but did commit just nine turnovers.

Valparaiso (1-3) continues Legends Classic play in Statesboro, Ga. this coming weekend.  The first of the Crusaders’ three games in three days will be against host Georgia Southern at 6:30 p.m. CST.  As always, all the action can be heard live on the Valpo Sports Radio Network (WEFM [95.9 FM, Michigan City] and WAKE [1500 AM, Valparaiso]), with links for live audio and live statistics available at www.valpoathletics.com.