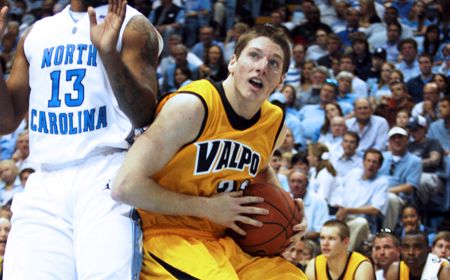 Valparaiso fell behind 22-3 just over seven minutes into the game, a deficit it could not overcome, as #5/5 Purdue went on to an 86-62 victory over the Crusaders Wednesday evening in West Lafayette, Ind.

The Boilermakers scored the first seven points of the game, getting back-to-back jumpers by JaJuan Johnson as well as an E’Twaun Moore 3-pointer.  Ryan Broekhoff (Frankston, Victoria, Australia/Australian Institute of Sport) answered with a triple of his own on Valpo’s next possession to cut it to 7-3, but Purdue then rattled off 15 points in a row, including five more points from Johnson, to extend its lead to 19 points just 7:11 into the contest.

A 3-pointer by Brandon Wood (Kokomo, Ind./Kokomo [Highland C.C./Southern Illinois]) halted the Boilermaker run, and following a pair of free throws by Cory Johnson (Duluth, Minn./Duluth East [Iowa State]), Valpo had cut the lead to 22-8 with 11:04 remaining in the first half.  The 14-point deficit was as close as the Crusaders would get from that point, however, as Purdue extended its lead to an eventual 47-25 halftime advantage thanks to 17 first-half points from Moore.

Purdue cemented the game away as it came out of the halftime break with another 10-0 spurt to pull ahead by 32 points.  The Crusaders responded with a 16-6 spurt, including five points apiece by Matt Kenney (Mooresville, Ind./Mooresville) and Michael Rogers (Kingston, Jamaica/Redemption [N.Y.] Christian), to cut the lead back down to 22.  But the Boilermakers would not let Valpo get any closer, extending their advantage to as much as 35 points with 6:15 to play before Valpo ended the game on a 15-4 run.

“Today showed how good of a defense Purdue has,” said Crusader head coach Homer Drew.  “They really make you work, pushing your offense out and making it tough just to catch the ball.  Then offensively, they really hurt us early with the 3-pointer, putting us down quickly.  I was pleased that we got better as the game went on, especially with handling their defensive pressure.”

Wood led the Crusaders with 21 points, coming off the bench for the first time in his Crusader career, and added a game-high nine rebounds as well.  Johnson chipped in 11 points and also came up with a career-best five steals on the defensive side of the ball.

Four Purdue (8-0) players finished in double figures in the scoring column, paced by 19 apiece from Moore and Johnson.  Robbie Hummel added 15 points, while Keaton Grant scored ten as well.  The Boilermakers connected on 52.7% (29-of-55) of their field goal attempts versus the Crusaders’ 42.2% (19-of-45) clip, while Valpo committed 18 turnovers and forced just 11 Purdue miscues.

“I am happy that we get to go back home and play two home games in a row coming up,” said Drew.  “It’s been tough on our guys being on the road for this long, and we’re eager to come back home and get to play on our home court in front of our fans.”

Valparaiso (3-6) returns home to the ARC for just its second regular season home game of the 2009-2010 campaign on Saturday afternoon, as the Crusaders host Toledo in a 2 p.m. matinee.  The game will be broadcast live on Lakeshore Public Television and online on the Horizon League Network, and as always, the game can be heard on the Valpo Sports Radio Network (WEFM, 95.9 FM, Michigan City; WAKE, 1500 AM, Valparaiso) and online at www.valpoathletics.com, which will also have a link for live statistics and video.