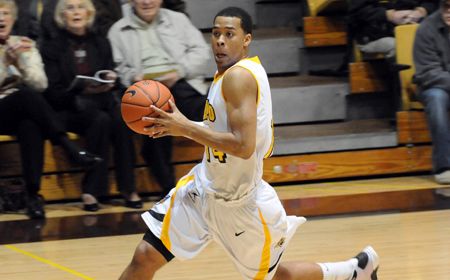 An evenly-matched game didn’t fall Valparaiso’s way Saturday night at the Athletics-Recreation Center, as the visiting Phoenix of Green Bay hit ten of its 12 free throw attempts in the end stages of the contest to hold off the Crusaders, 64-58.

“I thought both teams played hard and both teams played well tonight,” said Crusader head coach Homer Drew.  “We did a great job holding Green Bay scoreless for seven minutes to get back into the lead, and then we had opportunities to take the lead back late, if we could get a rebound or avoid a turnover.  But you have to give Green Bay credit; they made almost all their free throws down the stretch and got a couple big offensive rebounds.”

The Crusaders faced their largest deficit with 12:10 to play, as a fast-break layup by Rahmon Fletcher gave Green Bay a 48-40 advantage.  But the Crusader defense went to work, holding the Phoenix scoreless over the next seven minutes and lifting Valpo right back into the contest.

Brandon McPherson (Indianapolis, Ind./Lawrence North) connected on a layup out of the under-12 media timeout to cut the deficit to six points, and Howard Little (Chicago, Ill./Stoneridge [Calif.] School) split two pairs of free throws to make it a 48-44 game with 8:52 remaining.  After the Crusaders forced a Green Bay turnover, Brandon Wood (Kokomo, Ind./Kokomo [Highland C.C./Southern Illinois]) got to the foul line and connected on a pair of free throws.

On Valpo’s next offensive trip, McPherson made a nifty pass inside to Cameron Witt (Launceston, Tasmania, Australia/Launceston), who finished the layup to tie things up at 48 with 7:33 remaining.  Nearly two minutes later, Wood capped the 10-0 run with two more freebies, giving Valpo the 50-48 advantage with 5:49 to play.

The lead would swing between the two squads for the next couple minutes, with McPherson finding Little for a layup with 3:24 left that gave the Crusaders a 53-52 lead.  Bryquis Perine answered with a long jumper on Green Bay’s next possession that gave the Phoenix the lead for good.

The Phoenix would score the rest of its points from the free throw line, connecting on 4-of-6 over a 1:16 stretch to push its edge to 58-53 with 1:17 to play.  McPherson answered with a pair of free throws on Valpo’s next possession, and after Wood came up with a steal, the Crusaders had a shot to tie.  But a 3-point attempt with 39 seconds left was off the mark, and although McPherson hit a triple with 15 seconds remaining to cut the lead to two, Green Bay hit its free throws and kept Valpo from earning another chance to tie or take the lead.

A 10-0 run with four points apiece from Little and Cory Johnson (Duluth, Minn./Duluth East [Iowa State]) erased a seven-point Green Bay lead late in the first half, but the Phoenix closed the opening stanza on an 8-2 spurt to take a 32-29 lead into the break.  Valpo took a slim one-point lead twice in the early stages of the second half before the Phoenix put together a 10-2 run of its own to take the 48-40 advantage nearing the midway point.

Wood paced the Crusaders with 18 points and eight rebounds on Saturday, while Johnson chipped in 14 points, including an 8-of-9 effort from the charity stripe.  Little was the third Crusader in double figures, closing the night with ten points, five rebounds and three steals.

Green Bay (11-5, 4-1) was led by 16 points from Perine, while Randy Berry put up a double-double with ten points and ten rebounds.  The Phoenix got at least six points from seven of its eight players who saw action.

Valparaiso (6-9, 1-2) returns to action on the national stage on Friday, January 8, as the Crusaders will play at Detroit in a game televised on ESPNU.  Opening tip is slated for 6 p.m. CST, and as always, all the action can be heard live on the Valpo Sports Radio Network (WEFM, 95.9 FM, Michigan City; WAKE, 1500 AM, Valparaiso; WLPR, 89.1 FM, Merrillville) and online at www.valpoathletics.com, which will also have a link for live stats.