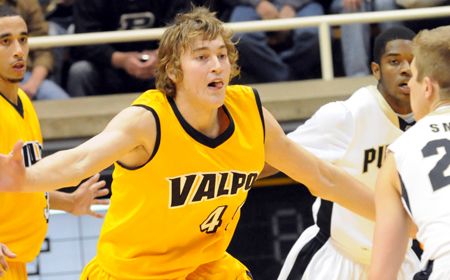 Valparaiso used an 11-0 run midway through the first half to take the lead for good, never letting ClevelandState get closer than three points in the second stanza in a 78-71 victory at the ARC Saturday afternoon in the Horizon League Network Game of the Week.  Senior guard Brandon McPherson (Indianapolis, Ind./Lawrence North) scored his 1,000th career point to cap the run, becoming the 29th player in Valpo history to reach the milestone.

“Brandon had another superb game today,” said Crusader head coach Homer Drew.  “And as our only senior, it’s not only his wonderful play on the floor that’s been good for us, but also his leadership, keeping the team together, which is just as important to this team.”

CSU’s Jeremy Montgomery put the Vikings ahead 10-7 with a triple just over five minutes into the game, but a 3-pointer by Cory Johnson (Duluth, Minn./Duluth East [Iowa State]) tied the game on the Crusaders’ next offensive trip.  Ryan Broekhoff (Frankston, Victoria, Australia/Australian Institute of Sport) gave Valpo the lead just over seven minutes in on a jumper in the lane before Montgomery tied things up for the fifth time with a long jumper with 11:51 to play in the opening half.

But the crucial Crusader run was looming, as Valpo scored on its next five possessions to gain some breathing room.  Johnson kicked off the run with his second triple of the game and eighth in the last four contests, and Howard Little (Chicago, Ill./Stoneridge [Calif.] School) followed with a fast-break layup off a feed from McPherson.

Little came up with another jumper on the next time down the floor, getting the assist from Broekhoff, who then recorded a steal on the defensive end.  McPherson got to the rim on the ensuing possession for a layup to push the lead to nine.  The fifth-year senior followed by hitting a mid-range jumper from the baseline off an inbounds play on the next trip to reach the scoring milestone and push the Crusader lead into double figures at 23-12 with 9:18 to play in the opening half.

The lead varied between seven and 12 points for the remainder of the opening 20 minutes.  Montgomery banked in a 3-pointer with the shot clock set to expire for CSU to close its deficit to 36-28, but on Valpo’s final possession, Broekhoff got up for a tip-in off a missed shot with just over one second remaining to push the lead back into double figures at the break.

Unlike recent games, when the Crusaders had fallen behind in the second half after significant halftime leads, this time Valpo would let the Vikings get no closer than three points.  CSU first closed to within three points with 12:57 to play on a layup by Montgomery, but the Crusaders answered immediately as Little found McPherson for an open triple on an inbounds play to push the lead back to six points.

A jumper by Norris Cole with 10:25 remaining again cut the Valpo advantage to 53-50, but Broekhoff canned a 3-pointer just 15 seconds later to start an 10-1 run.  Broekhoff also had a fast-break jumper during the spurt, while Brandon Wood (Kokomo, Ind./Kokomo [Highland C.C./Southern Illinois]) got out in front of everybody for a dunk and Cameron Witt (Launceston, Tasmania, Australia/Launceston) capped the run with a jump hook in the lane with 6:14 to play to make it 63-51 Valpo.

The Vikings had one final run in them, scoring nine straight points out of the final media stoppage to close to within 68-64 with 3:11 to play.  But Broekhoff hit Wood with a deep pass after a pair of CSU free throws, and the sophomore converted on the fast-break layup to push the lead back up to six points.  Following an offensive foul on CSU, Broekhoff took his man off the dribble for a layup to make it 72-64, and Valpo’s lead would not fall under four points the rest of the way.

“I thought we played very well in the first half, getting a lot of contributions from everybody,” said Drew.  “In the second half, we knew Cleveland State was going to make a run, because they’re a well-coached, quick team.  But our players stepped up, never let it get closer than three points, and said that’s as far as you guys are going, and really made some nice plays.”

Four Crusaders finished the game in double figures in the scoring column, led by McPherson, who hit 8-of-11 from the floor for a game-high 22 points, his second straight 20+ scoring effort.  Wood added 17 points, while Johnson finished with 15 points.  Broekhoff came up with an outstanding effort off the bench, going for 13 points, a team-high eight rebounds, three assists and three blocks in 23 minutes of action.

“I thought Ryan played his best game in a Valpo uniform today,” said Drew.  “He gave us good energy and rebounding off the bench, and really made a number of key plays that swung the momentum our way.  We got contributions from so many different people today.  Howard had a great first half (6 points, 3 assists) to get us out to the lead, and Cam really had a key stretch in the second half when he got a rebound on one end and came down with his jump hook on the other end.”

Cleveland State (7-12, 3-4 Horizon) also placed four players in double figures, led by 20 apiece from Montgomery and Trevon Harmon.  Valpo outshot Cleveland State 56.9%-39.4%, while both teams connected on eight triples.  The Vikings did come up with 12 steals while forcing 16 turnovers and held a 20-14 edge in points off turnovers, but the Crusaders countered with a 34-22 advantage in points in the paint.

Valparaiso (8-11, 3-4 Horizon) hits the road for the first of four straight road games on Thursday, as the Crusaders travel up to the Windy City to meet UIC.  Game time is set for 7 p.m., and as always, the game can be heard live on the Valpo Sports Radio Network (WEFM, 95.9 FM, Michigan City; WAKE, 1500 AM, Valparaiso) and can be seen on the Horizon League Network.  Valpo’s athletic website, www.valpoathletics.com, will have links for live audio, video and statistics.