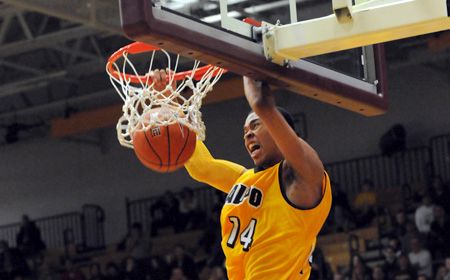 The Matchup: Valparaiso (10-11, 5-4) starts the second half of Horizon League play and takes aim at extending its winning streak to five games on Friday evening as the Crusaders continue their four-game road trip at Milwaukee (12-9, 4-5).

Last Time Out: Valparaiso put together an emphatic all-around showing to earn its first victory at Loyola in 35 seasons Saturday afternoon, going on a 30-8 run over the final 12 minutes of the first half en route to an 86-67 win over the Ramblers.  The win moved the Crusaders into a tie for third place halfway through the Horizon League campaign, and extends their winning streak to four games.  Offensively, the Crusaders shot better than 50% both overall from the floor (31-of-60, 51.7%) and from behind the 3-point line (11-of-21, 52.4%), and connected on 86.7% (13-of-15) of their attempts from the foul line.  Meanwhile, Valpo held Loyola to just 42.9% shooting for the game.  Most impressively, the Crusaders out-rebounded the Ramblers, who entered Saturday out-rebounding teams by over six boards/game, by an astounding 43-23 margin, including 15 caroms off the offensive glass.

Series History: Valpo owns a 10-7 edge in the all-time series over the Panthers and a 3-2 advantage since joining the Horizon League, including an improbable 55-54 victory at the ARC on New Year’s Eve.  Trailing by one with 3.8 seconds to play, Brandon McPherson intercepted an inbounds pass just inside halfcourt and took it all the way to the rim, laying it in with 0.9 seconds remaining for the win.  Brandon Wood led all scorers on the game with 22 points, while also matching Cameron Witt and Cory Johnson for game-high honors with five rebounds.  Matt Kenney scored ten critical points off the bench in 26 minutes of action as well.

Following the Crusaders:  As always, Friday’s game can be heard live on the Valpo Sports Radio Network (WAKE, 1500 AM, Valparaiso; WEFM, 95.9 FM, Michigan City; WLPR, 89.1 FM, Merrillville).  Veteran broadcaster Todd Ickow returns for his 19th season on play-by-play for the Crusaders, while Valpo alumnus Andy Viano will handle the color commentary.  The game can also be seen live online on the Horizon League Network.  Links for the VSRN audio and HLN Video, as well as live statistics, can be found at www.valpoathletics.com.

Winning on the Road: While winning two straight road games doesn’t sound like much, the Crusaders’ road sweep last weekend was the first time they had won back-to-back road games since beating Milwaukee (Feb. 25, 2008) and Washington (Mar. 19).  It also marked Valpo’s first time sweeping a league road weekend since its first weekend of Horizon League play, when it defeated both Wright State (Dec. 6, 2007) and Detroit (Dec. 8).  Prior to last weekend, the Crusaders had won just two of their previous 24 road contests.

How Much Did We Win By?: Saturday’s 19-point win at Loyola was memorable just for the sole fact of the final margin of victory.  Prior to their last outing, it had been over eight years since the Crusaders had won a road game by that much, a 70-50 victory at Northern Illinois on Nov. 27, 2001.  It takes going back three more seasons before finding the last time Valpo had won a league road game by at least 19 points, a 74-42 win at Chicago State on Jan. 21, 1999.

Jekyll and Hyde Shooting: Valpo’s two road wins last weekend featured polar opposite shooting performances.  The Crusaders’ win at UIC came despite shooting just 32.1% from the floor, Valpo’s worst shooting performance in a win since hitting at the same clip against Milwaukee on Feb. 12, 1994, and just 19.0% from behind the arc.  But just two days later, the Crusaders shot 51.7% from the floor and 52.4% from downtown in the win over Loyola.  The one constant was a stellar effort at the free throw stripe, as Valpo connected on 76.5% from the line at UIC and 86.7% at Loyola.

R-E-B-O-U-N-D: Valpo entered last weekend having not outrebounded a Horizon League opponent this year, but dominated the boards in both contests.  At UIC, the Crusaders held a 41-33 edge on the boards, including pulling down a season-best 19 offensive caroms.  More impressively, Valpo went to Loyola, which entered the game as the league leader in rebounding margin, and thrashed the Ramblers on the boards, 43-23, led by a Valpo season-best 14 rebounds by 6’3” guard Howard Little.  It was the highest rebounding margin against a D-I school by a Crusader squad since Jan. 17, 2004, when Valpo out-caromed Western Illinois, 48-27.

Connecting From Downtown: The Crusaders have easily been the best team in the league shooting the ball from behind the arc this season.  Valpo has connected on 65-160 (40.6%) attempts from behind the arc through nine league games, nearly three percentage points better than second-place Butler and nearly five percentage points above third-place Cleveland State.  In fact, Valpo has made more 3-pointers than its opponents in league play (65-63) despite taking 35 fewer attempts (160-195).  Valpo also boasts five of the top-11 3-point shooters by percentage in league-only play.

Tough Start: With the Crusaders one win shy of moving back to .500 for the  first time this year, it’s worth noting the struggles Valpo faced early on this season.  The Crusaders took on four teams ranked in the nation’s top-25 at the time of the game, all on the road, within the first nine games of the season, part of a stretch that saw Valpo play 10 of its first 13 games away from home.  In addition, Valpo came into the year with the second-least experienced team in the league (based on Ken Pomeroy’s Experience statistic) and features three freshmen and two sophomores within the regular rotation.

Rowdy Has Big Weekend: Freshman guard Ryan Broekhoff has stepped up his game of late and had a pair of big performances last weekend.  Thursday at UIC, the freshman showcased his ability to hit the glass, grabbing nine rebounds in just 17 minutes of action in the Crusader win.  Then Saturday, Broekhoff showed his shooting stroke, connecting on 6-of-8 3-point attempts for a career-best 20 points in Valpo’s win over Loyola.  Over the last three games, he is averaging 12.3 PPG and 6.7 RPG.

McPherson Back on Track: Fifth-year senior guard Brandon McPherson became the 29th player in Crusader basketball history to reach the 1,000 point milestone last Saturday afternoon with a leaner from the baseline midway through the first half in the victory over Cleveland State Jan. 16.  After failing to reach  double figures in the seven-game stretch from Concordia through Wright State, McPherson has hit double figures in each of the last four games, leading all players against YSU with 22 points on 9-of-16 shooting and again pacing everybody versus CSU with 21 points on 8-of-11 shooting.  The senior scored ten points in both wins last weekend while also posting 4.5 RPG and 3.0 APG.

Wood Scores in Bunches: Redshirt sophomore guard Brandon Wood has proven to be among the most prolific scorers the Crusaders have seen in their D-I history, scoring 30 or more points twice already to join Bryce Drew and Dan Oppland as the only players in the last 15 years to score 30 multiple times in a career, including a Valpo D-I record 39 at Georgia Southern earlier this year.  Wood, who currently paces the Horizon League with 18.6 points/game and also ranks among the league’s best in 3-point percentage, also has reached at least 20 points on seven other occasions, including 20 points in Valpo’s win Jan. 14 over Youngstown State.  Most recently, Wood scored 14 points in the win at Loyola while also chipping in six boards and four assists.

Johnson Contributes Every Time Out: Redshirt junior forward Cory Johnson has been a model of consistency down low this year for a mainly perimeter-based Crusader team.  Despite not reaching double figures for the first time this calendar year against UIC, Johnson posted nine points and matched season highs with 12 rebounds and four assists.  He followed with 12 points, four rebounds and five assists Saturday at Loyola.  The redshirt junior, who has scored in double figures in 18 of Valpo’s 21 games and has paced the Crusaders in rebounding 12 times, is sixth in the league in scoring and rebounding and second in field goal percentage.

Little Doubles Up: Two days after scoring his 500th career point, junior guard Howard Little exploded against Loyola on Saturday.  The 6’3” junior matched his career high and doubled his season best with an incredible 14 rebounds, the best single-game effort by a Crusader this year.  He also went 7-of-11 from the floor for a season-high 15 points and chipped in three assists and three steals.  On the year, he is fourth on the team in scoring (6.5 PPG), third in rebounding (4.5 RPG) and tops in steals (1.5 SPG).