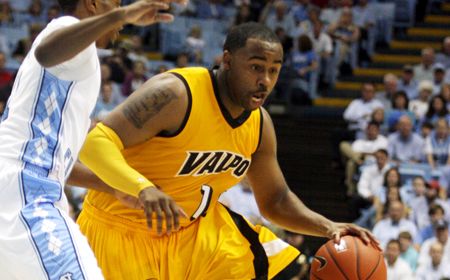 Valparaiso’s Brandon McPherson (Indianapolis, Ind./Lawrence North) canned his fifth 3-pointer of the game with 27 seconds to play to tie Friday night’s game at Milwaukee at 82 apiece, but Ricky Franklin answered with a 25-footer with 2.4 seconds remaining to give the Panthers an 85-82 victory over the Crusaders.  The loss snapped Valpo’s four-game winning streak.

“I was really proud of the way our guys fought in the second half,” said Crusader head coach Homer Drew.  “We were able to come back from the ten-point deficit, and a large part of that was due to Brandon’s leadership playing with four fouls for most of the half.  You just have to credit Franklin; he’s been an All-League player for Milwaukee this year.”

Franklin’s final triple ruined a solid second-half effort by the Crusaders, who twice rallied back from double-figure deficits in the final 20 minutes.  Valpo trailed 42-32 at the break, but scored 18 of the first 26 points in the second half, led by six from Cory Johnson (Duluth, Minn./Duluth East [Iowa State]), to forge back into a 50-50 tie with 13:54 to play on a triple by Ryan Broekhoff (Frankston, Victoria, Australia/Australian Institute of Sport).

Howard Little (Chicago, Ill./Stoneridge [Calif.] School) gave Valpo its first lead of the second half when he connected on a 3-pointer on the Crusaders’ next possession, but despite not giving up a field goal for the next five minutes, Valpo would find itself on the short end of the score.  Over that stretch, the Crusader offense went stagnant while Milwaukee got sent to the free throw line 14 times, going 8-of-14.  When Jason Averkamp finally broke the Panthers’ field goal drought, he connected on a 3-pointer, pushing the Milwaukee advantage to 63-56 with 7:52 to play.

An old-fashioned 3-point play by Averkamp just over two minutes later pushed the Crusader deficit back to double figures at 69-59 with 5:39 remaining.  But McPherson answered on the next two possessions, hitting back-to-back 3-pointers off passes from Brandon Wood (Kokomo, Ind./Kokomo [Highland C.C./Southern Illinois]), to keep Valpo within striking distance at 69-65.

Milwaukee pushed the lead back to seven points with 2:08 to play before Valpo made one final run at the win.  Wood started the spurt with a driving layup with 1:58 left and then came up with a steal and fast break on the next defensive possession, getting fouled and converting two free throws to make it 80-77 with 1:22 to play.

The Panthers missed a shot on their next trip and Johnson found Wood, who got ahead on the break and converted another layup to cut the deficit to one point with 1:01 left.  UWM’s JaRob McCallum hit two free throws with 37 seconds to play to push the lead back to three points and set up the final exchange of triples.

The first half was a tight back-and-forth battle for the most part, as Milwaukee jumped out to a 14-8 lead five minutes before Valpo answered with eight straight points to tighten things up.  Johnson’s second triple of the game tied the game at 32 with 4:58 to play in the opening half, but the Crusaders would fail to score for the rest of the opening 20 minutes.  During that stretch, the Panthers hit contested 3-pointers on three straight possessions as part of a 10-0 run that sent them into the locker room with a ten-point advantage.

“The first half was our demise tonight,” said Drew.  “We did not come out to play as aggressively as we needed to, and that’s why we found ourselves down ten.  I am proud of the fact we kept fighting.  We tied it up once, took some shots, and tied it up again.”

Johnson paced the Crusader effort with 21 points on 8-of-11 shooting while also grabbing seven rebounds.  McPherson knocked down five 3-pointers on his way to 17 points, while Wood put up 12 points and game-highs of eight rebounds and six assists.  The Crusaders connected at a 47.5% clip from the field for the game and handed out 18 assists while committing just eight turnovers.

Valparaiso (10-12, 5-5 Horizon) concludes its four-game road swing up in Green Bay on Sunday afternoon, a game that can be seen live on Lakeshore Public Television at 1 p.m.  As always, it will also be available on the Valpo Sports Radio Network (WEFM, 95.9 FM, Michigan City; WAKE, 1500 AM, Valparaiso) and can be seen on the Horizon League Network.  Valpo’s athletic website, www.valpoathletics.com, will have links for live audio, video and statistics.