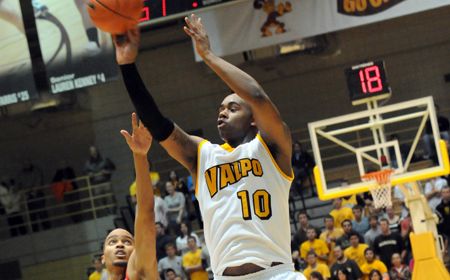 The Matchup: Valparaiso (13-14, 8-7 Horizon) looks to get back on the winning track on the road Saturday at Youngstown State (8-16, 2-12 Horizon).  The Crusaders, who are closing out a stretch of five games in ten days, have just two regular-season league contests left after Saturday night, both at home at the ARC.

Last Time Out: Down 18 with nine minutes to go, the Valparaiso men’s basketball team attempted to mount a furious comeback, closing to within four points on a pair of occasions, but Cleveland State hit all its free throws down the stretch and held off the Crusaders, 80-71, Thursday night in Horizon League action in Cleveland, Ohio.  CSU held a four-point lead at halftime and opened up to its largest lead with a 23-9 spurt over the first 11 minutes of the second half.  The Crusaders used a 12-2 run over the next 2:41 to close back to within striking distance, but could never get back to within one possession.  Brandon McPherson paced the Crusaders with 17 points, 11 of which came in the second half, while Brandon Wood scored all 14 of his points in the final 20 minutes as well.

Series History: Valparaiso owns a dominating 21-7 edge in the all-time series over Youngstown State and is a perfect 5-0 against the Penguins since joining the Horizon League, including a 70-66 win at the ARC on Jan. 14.  McPherson led the way for the Crusaders with 22 points in that most recent outing, while Wood went for 20 points, six rebounds and six assists.

Following the Crusaders:  Saturday’s game can be heard live on the Valpo Sports Radio Network (WAKE, 1500 AM, Valparaiso; WEFM, 95.9 FM, Michigan City; WLPR, 89.1 FM, Lowell).  Veteran broadcaster Todd Ickow returns for his 19th season on play-by-play for the Crusaders, while Valpo alumnus Andy Viano will handle the color commentary.  The game can also be seen live online on the Horizon League Network.  Links for the VSRN audio and HLN Video, as well as live statistics, can be found at www.valpoathletics.com.

League Play = Close Games: Valparaiso’s non-league slate this year featured just two single-digit decisions in 12 games, but once the Crusaders got to league play, the script flipped 180 degrees.  Through 15 league contests, Valpo has faced single-digit games 12 times already, including each of the last six outings.  This league season has been similar in nature for the Crusaders to the 2007-2008 league campaign, Valpo’s first season as a Horizon League member, when 14 of its 18 games were decided by nine or fewer points.

A New Level of Drama: Of the 12 single-digit games the Crusaders have contested in league play, eight of those games have been within one possession in the final 15 seconds.  And if it seems that recently the games have been more nailbiting than usual, it’s because prior to Thursday night at CSU, each of the previous five games (@UWM, @GB, WSU, UDM, UIC) had been included among the aforementioned eight.

Offense Produces: The Crusader offense has continued to be the key to the team’s resurgence in the win/loss column these past few weeks.  Valpo, which boasts the top scoring offense in the Horizon League at 72.7 PPG, has now scored 70 or more points in each of its last seven games and nine of the last ten outings after failing to reach the plateau in its first five league games.  The Crusaders’ offensive potency was on display Thursday at CSU, as after being held to just 39 points in the game’s first 31 minutes, Valpo exploded for 32 points over the final nine minutes in its attempt at a comeback win.

What a Difference a Year Makes: Just one year ago, the Crusaders sat at just 6-19 overall and 3-10 in league play, fighting to stay out of the bottom of the league standings.  This year, however, Valpo has turned things around.  The Crusaders already own 13 wins this year, four more than they ended last season with, and have already won eight league contests, three more wins than at the end of the 2008-09 campaign.  In addition, Valpo has also clinched a higher league finish than last year and is just two wins shy of setting a new team high for wins in Horizon League play.

Tough Start...: With the Crusaders just one game shy of the .500 mark , it’s worth noting the struggles Valpo faced early on this season.  The Crusaders took on four teams ranked in the nation’s top-25 at the time of the game, all on the road, within the first nine games of the season, part of a stretch that saw Valpo play 10 of its first 13 games away from home.  In addition, Valpo came into the year with the second-least experienced team in the league (based on Ken Pomeroy’s Experience statistic) and features three freshmen and two sophomores within the regular rotation.

McPherson Back on Track...: Fifth-year senior guard Brandon McPherson became the 29th player in Crusader basketball history to reach the 1,000 point milestone with a leaner from the baseline midway through the first half in the victory over Cleveland State Jan. 16.  After failing to reach double figures in the seven-game stretch from Concordia through Wright State, McPherson has hit double figures in each of the last ten games, including a pair of 20+ point games in wins over YSU and CSU.

And Leading the Way: McPherson is looking at a double league statistical championship, as he currently paces all league players in both 3-point percentage (.450) and free throw percentage (.871).  The senior is also moving up a bunch of Valpo career charts, most notably the career games played list, where he moved into a tie for fourth place last time out with 124 games played.  McPherson is just three games shy of matching and four games away from breaking Raitis Grafs’ program record for games played in a career.

Wood Leads the Way: Redshirt sophomore guard Brandon Wood has proven to be among the most prolific scorers the Crusaders have seen in their D-I history, scoring 30 or more points twice already to join Bryce Drew and Dan Oppland as the only players in the last 15 years to score 30 multiple times in a career, including a Valpo D-I record 39 at Georgia Southern earlier this year.  Wood, who currently paces the Horizon League with 18.4 points/game and also ranks among the league’s best in all three shooting categories, also has reached at least 20 points on eight other occasions.  Most recently, Wood reached double figures for the tenth straight time, scoring all 14 of his points in the second half at CSU.

Johnson Showcases His Versatility: Redshirt junior forward Cory Johnson has made himself known as one of the league’s premier post threats, one of just two league players that rank in the top-ten in both scoring and rebounding.  But Johnson has stepped out behind the arc over the last month and showcased his shooting ability, as after going 0-of-4 over the season’s first 15 games from downtown, he is 16-of-26 from deep over the last 13 contests.  None of his triples were bigger than his third one on Jan. 31 at Green Bay, which gave Valpo the lead for good in the win and capped a 20-point day.  Johnson failed to reach double figures for just the fourth time this year last time out at Cleveland State, but did pace the Crusader effort on the boards with six rebounds in just 17 minutes.

Broekhoff Grabs Boards: Freshman Ryan Broekhoff has been a big part of Valpo’s success in its most recent stretch of seven wins in ten games.  Broekhoff has scored in double figures four times and pulled down ten or more rebounds twice, averaging 8.7 PPG and 6.9 RPG over the schedule of games starting with the home win over Youngstown State.  This past Monday, Broekhoff tied for team-high scoring honors with 18 points and also paced the Crusaders with nine rebounds in the win over UIC.

Quickly: Sophomore Milos Milosevic set a career high with five points and also matched a career-best with three rebounds Thursday at CSU ... the Crusaders tallied just six assists against the Vikings, second-fewest in a single game this year ... junior Michael Rogers reached double figures for the sixth time this year with 12 points Thursday ... junior Howard Little is connecting at a .709 clip from inside the arc in HL-only play.