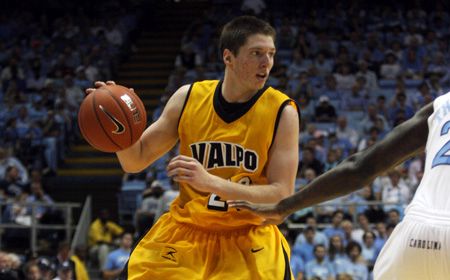 Freshman guard Matt Kenney (Mooresville, Ind./Mooresville) scored a career-best 27 points off the bench Wednesday, leading a 52-point night from Valparaiso’s reserves as the Crusaders led by as many as 20 in an 84-73 win over Loyola at the ARC.  With the win, the Crusaders secured a first-round home game in the Horizon League Championship.

“There’s lots of good news coming out of tonight’s game,” said Crusader head coach Homer Drew.  “Obviously, the fact that we won is important, as is secondly that we get to host a game in the league championship with tonight’s win.  Also, I’m excited because it’s our tenth league win, which is the most we’ve had in a season since joining the Horizon.”

Kenney, who had previously set his career high in points last time out at Youngstown State with 15, rolled right past that mark with over 14 minutes to play en route to his 27 points.  The freshman connected on 9-of-13 shots from the field, including 3-of-5 from behind the arc, and hit 6-of-7 from the foul line on the night.  He also added six rebounds, three assists and two steals in the win.

Kenney was just one of three reserves for Valpo who finished the night in double figures, however.  Junior Howard Little (Chicago, Ill./Stoneridge [Calif.] School) hit 4-of-7 from the floor and 6-of-8 from the line en route to 15 points, while also pacing the Crusaders with seven rebounds and three steals.  Freshman Ryan Broekhoff (Frankston, Victoria, Australia/Australian Institute of Sport) also posted good numbers in just 14 minutes off the bench, ending the night with ten points, five rebounds and two assists.

“Matt definitely surpassed his Youngstown State game tonight,” said Drew.  “Not just in the number of points he scored, but his aggressiveness on the boards and on the defensive end and also passing the basketball.  Howard as well really did a great job defensively and on the boards.  Those two stepped up on the defensive end for us, made our defense more active and aggressive and just changed the tempo of the game.”

The start of Wednesday’s contest looked a lot like the beginning of the matchup in Chicago earlier this season, as Loyola came out of the gates on fire and took a 15-9 advantage just 4:20 into the game.  But Valpo answered back with 20 of the next 28 points over a span of just over nine minutes, capped by a Kenney triple that gave the Crusaders a 29-23 advantage.

Loyola scored the next five points, however, cutting the Valpo lead down to one point, and the Crusader edge was still just two with 1:19 to play in the opening half after a pair of free throws by Courtney Stanley.  But Valpo made the most of its final two possessions of the first half, as first Little and then Broekhoff connected on triples, both off feeds from Brandon McPherson (Indianapolis, Ind./Lawrence North), and the Crusaders went into the locker room ahead 40-34.

Kenney and Little both earned the start in the second half with their play in the opening 20 minutes, and helped spark the Crusaders to a 24-10 spurt over the first 7:17 out of the break.  Kenney scored ten of his points during that stretch, while Brandon Wood (Kokomo, Ind./Kokomo [Highland C.C./Southern Illinois]) capped the spurt with a one-handed put-back dunk off a miss on the fast break.

Loyola made a good run back at the Crusaders, however, outscoring Valpo 16-3 in the middle portion of the second half to close to within 67-60 with 6:53 to play.  Wood got fouled on a 3-pointer on Valpo’s next offensive trip and knocked down all three free throws to help keep the Ramblers at bay, though.  Loyola eventually cut the lead to six points at 78-72 with 1:41 remaining, but would score just one point the rest of the way as Valpo went 6-of-8 at the charity stripe down the stretch to secure the win.

“I thought the key to the game came on either side of halftime,” said Drew.  “First off, going in at the end of the first half and extending our lead to six points was huge.  Then to come out of the gate and outscore them [24-10] obviously was important as well.  You have to give Loyola credit, though, they came right back, hit some shots and got closer than we would have liked, but our free throw shooters kept us in the lead at the end.”

Andy Polka put up a double-double for Loyola (14-12, 5-11 Horizon), scoring 19 points and grabbing a game-best 11 rebounds.  Geoff McCammon added 18 points, but was held to 5-of-16 shooting, while Terrance Hill chipped in 15 points and seven rebounds.

Valparaiso (15-14, 10-7 Horizon) secured at worst a sixth-place league finish with Wednesday night’s win and also set a new mark for most league wins since joining the Horizon League.  The Crusaders are guaranteed a seed between three and six, meaning they will host a first-round home game in the Horizon League Championship on the evening of Tuesday, March 2.

Prior to that, Valpo has two regular-season games remaining, however, with the first a non-league matchup Saturday afternoon at 1 p.m. CST at Bowling Green.  As always, all the action can be heard live on the Valpo Sports Radio Network (WEFM, 95.9 FM, Michigan City; WAKE, 1500 AM, Valparaiso; WLPR, 89.1 FM, Lowell), while Valpo’s athletic website, www.valpoathletics.com, will have links for live audio and statistics.