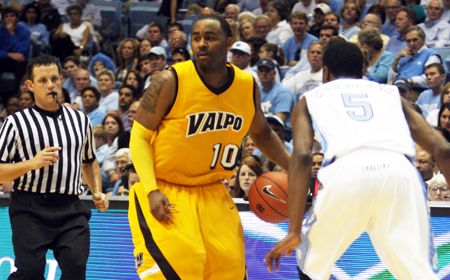 The Matchup: Valparaiso (15-15, 10-7) closes out regular season play Friday night with a matchup against in-state rival #15/10 Butler (25-4, 17-0) live nationwide on ESPNU.  It also marks the Crusaders’ Senior Night, honoring lone senior Brandon McPherson for his contributions to the program over the last five years.

Last Time Out: Valparaiso was unable to capture a victory in its final non-league game of the regular season, falling to Bowling Green State University 87-70 Saturday afternoon in Bowling Green, Ohio.  Fifth-year senior Brandon McPherson matched the Crusader career record for games played with his 127th career game, tying Raitis Grafs.  The Crusaders, who never led in the game, found themselves down 25 at the half and could only fight back to within 11 points in the second stanza.  Five Crusaders finished the game in double figures, paced by 16 points from McPherson, who also dished out a game-high seven assists. Little scored 11 points to go along with a team-best six rebounds and four assists, while Matt Kenney added 11 points as well, his third straight game in double figures.

Series History: The most common foe in Crusader basketball history, Butler holds a 65-32 advantage in an all-time series that dates back to 1934-35.  The Bulldogs have also won all five meetings since Valpo joined the Horizon League, including an 84-67 victory in Indianapolis on Dec. 5 of this season.  The Crusaders actually shot 53.3% from the field for the game and nearly matched the Bulldogs from the floor, but Butler earned 15 more points from the free throw line to earn the win.  Cory Johnson led the Crusader effort in that game with 17 points and five rebounds, while Howard Little added 14 points off the bench.

Following the Crusaders:  Friday’s game will be telecast live nationwide on ESPNU, the fifth Crusader contest this year available on national television, with Jim Barbar and Mark Adams on the call.  As always, if you can’t make it to the game or are unable to watch, the game can also be heard live on the Valpo Sports Radio Network (WAKE, 1500 AM, Valparaiso; WEFM, 95.9 FM, Michigan City; WLPR, 89.1 FM, Lowell).  Veteran broadcaster Todd Ickow returns for his 19th season on play-by-play for the Crusaders, while Valpo alumnus Andy Viano will handle the color commentary.  Links for the VSRN audio and live statistics can be found at www.valpoathletics.com.

McPherson Setting a Record: How apropos is it that on Senior Night this year, the lone Crusader senior, fifth-year guard Brandon McPherson, will be breaking one of Valpo’s career records?  When he steps on the court against the Bulldogs tonight, McPherson will be playing in his 128th career game, breaking former Crusader Raitis Grafs’ career games played record of 127.  McPherson played in 25 games as a freshman and then appeared in every game for the Crusaders as a sophomore (31) and junior (36).  He took to the court five times last year in his first senior season before having to sit out the remainder of the season due to injury, and will be appearing in his 31st game this season tonight.

Elsewhere on the Charts: McPherson’s long, distinguished career also has placed him among the Crusaders’ all-time best in a number of other categories.  His 41.5% career 3-point percentage ranks seventh in Valpo history, while he has drained 158 career triples, eighth-most all time and just one shy of seventh place.  He has handed out 310 assists, good for 11th all-time at Valpo and just six away from the top-ten, and has scored 1,155 career points, 27 points outside the Crusaders’ top-20 scorers.

Take a Look at the Standings: With the Crusaders having just one regular season Horizon League game left, the race for positioning for the 2010 Speedway Men’s Basketball Horizon League Championship becomes paramount.  While Valpo still has a mathematical chance at finishing in a tie for second, the Crusaders would be unable to win a tiebreaker to gain the second seed.  A win tonight would guarantee Valpo no worse than the fourth seed, meaning it would face either UIC or Youngstown State in the first round, while a loss tonight will mean the Crusaders finish with the fourth, fifth or sixth seed, depending on the outcome of the weekend’s other HL games.

Back Home at the ARC: The Crusaders are on pace to again post a solid home record, a seemingly annual occurence for the men’s basketball program.  Valpo is a stellar 9-2 at the Athletics-Recreation Center this season, with one regular season home game remaining, as well as a home contest in the HL Championship.  Over the past 17 seasons, the Crusaders are now 179-39 (.821) at the friendly confines of the ARC.  In addition, Valpo is just one win shy of its 13th season in the past 17 with double-digit home wins.

Dramatic Endings: Valpo has consistently given its fans their money’s worth this year with 40 exciting minutes of basketball.  In league play, 13 of the Crusaders’ 17 games have been decided by single digits.  And of the 13 single-digit games the Crusaders have contested in league play, nine of those games have been within one possession in the final 15 seconds, including six of Valpo’s last eight games.

Offense Produces: The Crusader offense has continued to be the key to the team’s resurgence in the win/loss column these past few weeks.  Valpo, which boasts the top scoring offense in the Horizon League at 73.1 PPG, has now scored 70 or more points in each of its last ten games and 12 of the last 13 outings after failing to reach the plateau in its first five league games.

Individual Scoring Performances: Matt Kenney scored 27 points last Wednesday against Loyola, becoming the fifth different Crusader to put up at least 20 in a game this season.  Valpo has combined for 24 individual 20+ scoring performances, led by 11 from Brandon Wood.  Cory Johnson has reached 20 points on seven occasions, while Brandon McPherson has dropped 20 or more four times and Ryan Broekhoff added one game of 20 points.

What a Difference a Year Makes: Just one year ago, the Crusaders closed the year at 9-22 overall and 5-13 in HL play.  This year, however, Valpo has turned things around.  The Crusaders already own 15 wins this year, including ten league victories.  With a win Friday, Valpo would clinch at least a .500 record this year.

Tough Start...: With the Crusaders above the .500 mark , it’s worth noting the struggles Valpo faced early on this season.  The Crusaders took on four teams ranked in the nation’s top-25, all on the road, within the first nine games of the season, part of a stretch that saw Valpo play 10 of its first 13 games away from home.  In addition, Valpo came into the year with the second-least experienced team in the league (based on Ken Pomeroy’s Experience statistic) and features three freshmen and two sophomores within the regular rotation.

Kenney On a Roll: Freshman guard Matt Kenney has been on top of his game over Valpo’s last three contests.  At Youngstown St., Kenney registered 15 points, including six straight in the final minute to put Valpo in the lead, eight rebounds and five steals off the bench, while also handing out five assists and committing just one turnover.  Then  against Loyola, he one-upped himself, smashing his career high with 27 points on 9-of-13 shooting and chipping in six rebounds and three assists.  Last time out at BG, Kenney posted 11 points off the bench.

Wood Leads the Way: Redshirt sophomore guard Brandon Wood has proven to be among the most prolific scorers the Crusaders have seen in their D-I history, scoring 30 or more points twice already to join Bryce Drew and Dan Oppland as the only players in the last 15 years to score 30 multiple times in a career, including a Valpo D-I record 39 at Georgia Southern earlier this year.  Wood, who currently paces the Horizon League with 17.9 points/game, also has reached at least 20 points on nine other occasions.  Most recently, he put up double figures for the 13th straight game, putting up ten points at Bowling Green last Saturday.

Johnson Among Most Accurate: Redshirt junior forward Cory Johnson is one of the most accurate shooters from the field in the nation.  Johnson has connected on a 55.7% clip from the floor this season, good for 21st nationally and second in the Horizon League.  In addition, he ranks sixth in the league in scoring (14.9 PPG), and after going 0-for-4 from behind the arc in non-league action, he is a league-best 16-for-27 (.593) from 3-point range in league play.  Johnson scored ten points last time out at Bowling Green, his 26th double-digit performance of the year.

Little Stepping Up: Junior guard Howard Little has joined Kenney with a solid stretch of games over Valpo’s last three contests.  Little has scored in double figures in each of the three games and is averaging 13.3 PPG and 5.7 RPG over that stretch while shooting at a 70% clip from the floor.  The junior has been by far Valpo’s best finisher inside the arc in Horizon League action, hitting 46-of-65 (70.8%) 2-point attempts in league play.