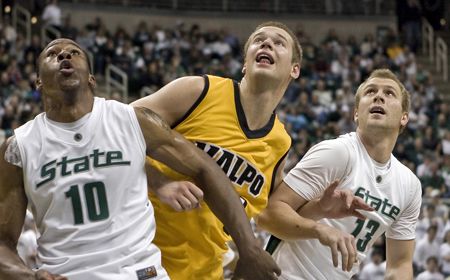 Cory Johnson posted a double-double with 28 points and ten rebounds Friday. (Andy Keilen)
#15/10 Butler at Valparaiso | February 26, 2010
Related Links
Related Links
Valparaiso led #15/10 Butler at the half in front of a capacity crowd at the Athletics-Recreation Center Friday night and was still leading with less than ten minutes to play, but the Crusaders eventually fell to the Bulldogs, 74-69, in both teams’ regular season finale.  Senior Brandon McPherson (Indianapolis, Ind./Lawrence North) broke Valpo’s program record for games played in a career with his 128th appearance.

“We’re all disappointed tonight, because we were looking for the storybook ending,” said Crusader head coach Homer Drew.  “We had a great crowd, great atmosphere for a great Division I basketball game, and I just wish we had been able to hit a couple more of our 3-pointers to maybe push the game our way at the end.  Our guys played well, came out ready to play and really worked hard.  You have to give Butler credit, they played well without one of their best players [Gordon Hayward], and everybody pitched in a little bit more than normal for them tonight.”

The Crusaders got out to a quick start on the national television stage, scoring the first six points of the game within the first two minutes on baskets in the paint by Howard Little (Chicago, Ill./Stoneridge [Calif.] School), Brandon Wood (Kokomo, Ind./Kokomo [Highland C.C./Southern Illinois] and Cory Johnson (Duluth, Minn./Duluth East [Iowa State]).  The 6-0 spurt sent Valpo out to a lead which it would maintain for almost the duration of the opening half.

The lead swelled to eight points at 20-12 with 10:15 to go in the half before Butler responded with a 10-2 run to tie things up at 22 with 5:17 to play in the first.  The remainder of the half was played within one possession, with the Bulldogs earning their first lead on a Shelvin Mack layup with 16 seconds to go before the break.  McPherson came down and got fouled on Valpo’s final possession, however, and sank both free throws to send the Crusaders into the locker room ahead 31-30.

Butler came out of the break with a quick 10-2 spur, capped by a triple by Shelvin Mack, to go up 40-33 with 16:55 to go.  The Crusaders didn’t back down, however, slowly cutting the margin down until a bucket by Johnson tied the game at 44 with 13:24 to play.  Johnson then connected on a triple on Valpo’s next trip, the Crusaders’ first successful 3-pointer on their 16th attempt of the night, to put it back in front, and a basket two minutes later by Ryan Broekhoff (Frankston, Victoria, Australia/Australian Institute of Sport) extended the Crusader lead to 49-46 with 10:39 remaining.

But the Bulldogs reeled off a game-changing 19-3 run over the next six minutes to take control of the contest, with 3-pointers on back-to-back possessions by Willie Veasley mid-run to stretch a five-point edge to 11.  With Butler up 65-52 and 4:49 to play, the Crusaders made one final push to get back in the game, eventually closing to within five points at 69-64 on a Matt Kenney (Mooresville, Ind./Mooresville) triple with 1:22 to go, but the Bulldogs answered with a layup by Mack on their next trip down to end Valpo’s attempt at the upset.

Johnson had a monster game for the Crusaders, hitting nine shots from the floor and 9-of-10 from the free throw line to finish with 28 points while also pulling down ten rebounds.  On his senior night, McPherson was the only other Valpo player in double figures, tallying 14 points.  The Crusaders struggled immensely from behind the 3-point arc on the night, hitting just 4-of-25 (16.0%) from downtown.

“I’m really proud of what Cory and Brandon did for us tonight,” said Drew.  “They really made the difference as far as keeping us in the game.  I was also proud of the team as a whole for fighting hard the whole way.  We got down double digits late, but didn’t give up and managed to get back to within five points.”

Valparaiso (15-16, 10-8) will now wait for Saturday’s results to roll in to find out where it will be seeded and who it will face in the first round of the 2010 Speedway Horizon League Men’s Basketball Championship.  The Crusaders do know they will be playing that game at the ARC on Tuesday evening at 7 p.m.  As always, all the action can be heard live on the Valpo Sports Radio Network (WEFM, 95.9 FM, Michigan City; WAKE, 1500 AM, Valparaiso; WLPR, 89.1 FM, Lowell) and can be seen on the Horizon League Network.  Valpo’s athletic website, www.valpoathletics.com, will have links for live audio, video and statistics.