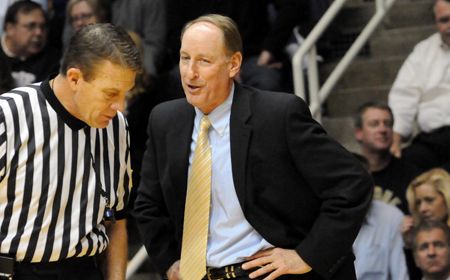 The Matchup: Valparaiso (15-16), which finished in a tie for fourth place in the league regular season standings, is the sixth seed for the 2010 Speedway Horizon League Men’s Basketball Championship and will host seventh-seeded Detroit Tuesday evening in first round action.

Last Time Out: Valparaiso led #15/10 Butler at the half in front of a capacity crowd at the Athletics-Recreation Center Friday night and was still leading with less than ten minutes to play, but the Crusaders eventually fell to the Bulldogs, 74-69, in both teams’ regular season finale.  Senior Brandon McPherson broke Valpo’s program record for games played in a career with his 128th appearance.  Valpo led 49-46 with 10:39 remaining before the Bulldogs went on a 19-3 run over the game’s next six minutes to take control.  Cory Johnson had a monster game for the Crusaders, hitting nine shots from the floor and 9-of-10 from the free throw line to finish with 28 points while also pulling down ten rebounds.  On his senior night, McPherson was the only other Valpo player in double figures, tallying 14 points.  The Crusaders struggled immensely from behind the 3-point arc on the night, hitting just 4-of-25 (16.0%) from downtown.

Series History: The Crusaders and Titans have met just 12 times in program history, with each team earning six victories.  This season, both squads have defended their home court.  Detroit rallied from a 10-point halftime deficit to beat Valpo on Jan. 8, 77-67, despite 31 points by Cory Johnson.  The Crusaders gained revenge at the ARC on Feb. 6, jumping out to a 19-point halftime lead and then rallying after falling behind in the second half for a 74-70 win.  Four Valpo players finished in double figures in that game, led by 18 points from Brandon Wood.

Following the Crusaders:   Tuesday’s game can be heard live on the Valpo Sports Radio Network (WAKE, 1500 AM, Valparaiso; WEFM, 95.9 FM, Michigan City; WLPR, 89.1 FM, Lowell).  Veteran broadcaster Todd Ickow returns for his 19th season on play-by-play for the Crusaders, while Valpo alumnus Andy Viano will handle the color commentary.  The game can also be seen live online on the Horizon League Network.  Links for the VSRN audio and HLN Video, as well as live statistics, can be found at www.valpoathletics.com.

Wood Named Newcomer of the Year: The Horizon League announced its postseason awards on Monday, and the Crusaders claimed one of the league’s speciality awards, as redshirt sophomore Brandon Wood was named the Horizon League Newcomer of the Year.  Wood, who spent last season at Highland [Ill.] C.C. after taking a medical redshirt in 2007-08 at Southern Illinois, led the league in scoring this year at 17.5 PPG.  He becomes just the fourth Crusader to earn conference Newcomer of the Year accolades, joining Mid-Con honorees Lance Barker (1991-92), Bryce Drew (1994-95) and Lubos Barton (1998-99).

Duo Rakes In Multiple Honors: Wood was joined by redshirt junior Cory Johnson in receiving multiple other honors as well from the league on Monday.  The duo both earned spots on the All-League Second Team, marking the first time since 2004-05 that multiple Crusaders have earned all-conference honors (Dan Oppland, Ron Howard).  They also each were selected to the All-Newcomer Team, the first time in more than a decade Valpo has placed more than one player on the first-year squad (1998-99: Lubos Barton, Ivan Vujic).

A Look at Valpo in the HL Championship: This year is Valpo’s third appearance in the Horizon League Men’s Basketball Championship, and the Crusaders are hoping for success along the same lines of two years ago.  In 2007-08, Valpo’s first year in the league, the Crusaders also finished the regular season in a tie for fourth, but were awarded the sixth seed.  That championship saw Valpo win a pair of games before dropping a tight semifinal battle to Cleveland State.  Last year, Valpo was the ninth seed and lost a first-round game at fourth-seeded Wright State.

One More Home Game: Valpo’s win over Loyola on Feb. 17 secured the Crusaders one final home game this season at the Athletics-Recreation Center, a venue which has been extremely Valpo-friendly over the years.  Valpo enters Tuesday’s matchup with Detroit at 9-3 at the ARC this season.  Over the past 17 seasons, the Crusaders are now 179-40 (.817) at the friendly confines of the ARC.  In addition, Valpo is just one win shy of its 13th season in the past 17 with double-digit home wins.

Offensive Improvement: Despite a season-worst shooting performance from 3-point range (4-of-25, 16%) from the league’s best 3-point shooting squad entering the game (38%), Valpo still almost made it to 70 points yet again, falling just one point shy.  The Crusader offense has been the key to the improvement Valpo fans have seen this year, as the Crusaders lead the league with 73.0 points per game one year after averaging just 61.3 points per game.  Valpo has scored 70 or more points 20 times this year, including 12 of the last 14 games, and has hit the 80-point barrier on nine occasions.

Dramatic Endings: Valpo has consistently given its fans their money’s worth this year with 40 exciting minutes of basketball.  In league play, 14 of the Crusaders’ 18 games were decided by single digits.  Included among those 14 close games were nine games that were within three points or fewer one way or the other inside of 15 seconds to play.

Individual Scoring Performances: Five different Crusaders have scored 20 or more points at least once this year, combining for 25 performances of 20+ points.  Brandon Wood has led the way with 11 such games, while Cory Johnson has reached 20 points on eight occasions.  Brandon McPherson has dropped 20 or more four times, and Ryan Broekhoff and Matt Kenney have each posted one game of at least 20 points.

What a Difference a Year Makes: Just one year ago, the Crusaders closed the year at 9-22 overall and 5-13 in HL play.  This year, however, Valpo turned things around.  The Crusaders already own 15 wins this year, including ten league victories.  They also made quite a jump up the league standings, as after finishing last year in ninth place and being picked eighth this preseason, Coach Drew’s squad finished tied for fourth place, its second upper-division finish in three seasons as a league member.

McPherson Sets a Record: Fifth-year senior guard Brandon McPherson had a special confluence of events on Senior Night Friday against Butler  When he stepped onto the court against the Bulldogs, McPherson played in his 128th career game, breaking former Crusader Raitis Grafs’ career games played record of 127.  McPherson played in 25 games as a freshman and then appeared in every game for the Crusaders as a sophomore (31) and junior (36).  He took to the court five times last year in his first senior season before having to sit out the remainder of the season due to injury, and will be appearing in his 32nd game this season against Detroit.

Elsewhere on the Charts: McPherson’s long, distinguished career also has placed him among the Crusaders’ all-time best in a number of other categories.  His 41.1% career 3-point percentage ranks seventh in Valpo history, while he has drained 158 career triples, eighth-most all time and just one shy of seventh place.  He has handed out 311 assists, good for 11th all-time at Valpo and just five away from the top-ten, and has scored 1,169 career points, 13 points outside the Crusaders’ top-20 scorers.

Wood Leads the Way: Redshirt sophomore guard Brandon Wood has proven to be among the most prolific scorers the Crusaders have seen in their D-I history, scoring 30 or more points twice already to join Bryce Drew and Dan Oppland as the only players in the last 15 years to score 30 multiple times in a career, including a Valpo D-I record 39 at Georgia Southern earlier this year.  Wood, who currently paces the Horizon League with 17.5 points/game, also has reached at least 20 points on nine other occasions.

Johnson Among Most Accurate: Redshirt junior forward Cory Johnson is one of the most accurate shooters from the field in the nation.  Johnson has connected on a 55.5% clip from the floor this season, good for 19th nationally and second in the Horizon League.  In addition, he ranks fifth in the league in scoring (15.3 PPG) and seventh in rebounding (5.8 RPG), one of just two players league-wide to rank in the top ten of both categories.  Last time out against #15/10 Butler, Johnson dominated the paint, leading all players with 28 points and ten rebounds for his second double-double of the year.

Kenney On a Roll: Freshman guard Matt Kenney has been on top of his game over Valpo’s last four contests.  In that stretch, Kenney is averaging 15.3 PPG on 59.4% FG/60% 3PT/70% FT.  At Youngstown St., Kenney registered 15 points, including six straight in the final minute to put Valpo in the lead, eight rebounds and five steals off the bench, while also handing out five assists and committing just one turnover.  Then  against Loyola, he one-upped himself, smashing his career high with 27 points on 9-of-13 shooting and chipping in six rebounds and three assists.  The freshman had a solid all-around performance against #15/10 Butler, going for eight points, four rebounds, three assists and two blocked shots.

Little Connects From Inside: It might seem backwards, but junior guard Howard Little, at just 6’3”, is by far Valpo’s best finisher inside the arc in Horizon League play.  Little connected at a ridiculous 72.1% (49-of-68) rate on 2-point shots over Valpo’s 18 league games en route to averaging 7.8 PPG in league action.  He also has overcome his height disadvantage inside to be one of the Crusaders’ best rebounders, averaging 4.0 RPG this year, third-best on the team.

Quickly: Valpo led Butler in all five speciality stat categories Friday (paint, off turnovers, 2nd chance, fast break, bench), the first time this season out of five occurrences that the Crusaders have lost a game in which they’ve led all five ... the loss was just Valpo’s third of the year when leading at halftime (@Detroit, @Wright St.) ... Little earned his first start since Jan. 8 on Friday.