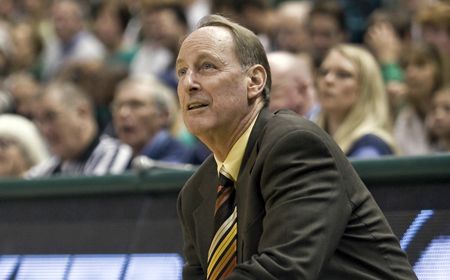 The name Drew has long been synonymous with basketball excellence at Valparaiso University. Next season, the Crusaders’ home court will bear that name.

Valparaiso University will be replacing the main floor in the arena at the Athletics-Recreation Center this summer and is taking the opportunity to honor longtime head men’s basketball coach Homer Drew by naming the new court after him.

“Valparaiso has a long and storied basketball tradition, and Coach Drew is a very significant player in that tradition,” said Valparaiso director of athletics Mark LaBarbera. “Given his contributions to athletics and the university’s national reputation and his strong commitment to the student-athletes for more than 20 years, it is fitting that we are able to honor Coach Drew in this manner.”

Drew has spent 21 seasons as the head coach at Valparaiso, helping to put the men’s basketball program on the national scene while accumulating 348 wins at the helm of the Crusaders. He ranks seventh among active Division I head coaches in victories. During his time at Valpo, he has guided the Crusaders to eight conference regular-season titles and conference tournament championships. Drew has led Valpo into the NCAA Tournament seven times, the most memorable appearance being in 1998 as Drew and the Crusaders downed Ole Miss and Florida State en route to a Sweet 16 appearance.

Off the court, Drew has received numerous honors. He was awarded the Lumen Christi Medal in 1999, Valparaiso University’s highest honor in recognition of a lay person’s distinguished service to church and society. He was recently recognized as one of the 150 most influential people in Valparaiso University’s 150 years, and was inducted into the Athletics Hall of Fame in February 2009 as a member of the 1997-1998 men’s basketball squad. Drew was awarded the Mid-Continent Conference’s Commissioner’s Award of Merit, the league’s most prestigious honor, in October of 2002, and also has received the Naismith Good Sportsmanship Award from the Naismith International Basketball Foundation.

“I am thrilled that we are going to be getting a new floor at the ARC,” Drew said. “The best part is that it will benefit not just basketball but all the sports that play or practice on the main floor at the ARC, as well as intramural athletes, so it is something that will be enjoyed by a multitude of people.”

The official unveiling of the new court will take place early in the 2010-2011 season, with the exact date to be set once next year’s schedule is finalized. To donate to the project, fans can visit https://www.valpo.edu/homerdrewcourt/ or call 1-800-803-7184, ext. 15. Gifts also can be mailed to Valparaiso University, Office of Institutional Advancement, 1100 Campus Drive South, Valparaiso, IN 46383-6493.