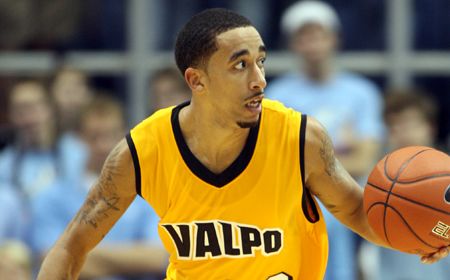 Valparaiso hit at a 63.5% clip from the floor Saturday afternoon, led by a 10-for-11 effort from junior guard Brandon Wood (Kokomo, Ind./Kokomo [Highland C.C./Southern Illinois]), and enjoyed as much as a 50-point lead before cruising to a 98-66 victory over Aurora in exhibition action at the ARC.

Wood needed just 23 minutes to connect on 10 of his 11 field goal attempts, including 4-for-5 from behind the arc as he closed the game with 24 points.  The junior also pulled down seven rebounds and handed out a game-high eight assists.

But Wood was far from the only one efficient with his shots on Saturday afternoon, as the Crusader starting lineup combined to go 23-for-30 (76.7%) from the floor.  Sophomore Ryan Broekhoff (Frankston, Victoria, Australia/Australian Institute of Sport) went 5-for-6 from the floor and knocked down a pair of 3-pointers en route to a 13-point, seven-rebound, four-steal effort, while senior Howard Little (Chicago, Ill./Stoneridge [Calif.] School) scored ten points as well Saturday.

“Brandon and Ryan have both been great players for us,” said Crusader head coach Homer Drew.  “Beyond their scoring, Brandon today had eight assists and just one turnover and has really grown tremendously.  He made some wonderful passes, saw the floor very well and did a great job rebounding too.  Ryan is the same way, he just does so many little things for us beyond just scoring and came up with four steals tonight.”

The trio of Crusader starters in double figures was matched by three Valpo players scoring ten or more off the bench as well.  Sophomore Matt Kenney (Mooresville, Ind./Mooresville) connected on 5-of-7 shots for 12 points to go with three blocked shots in just 11 minutes of play.  Freshman Jay Harris (Aurora, Ill./Oswego East) scored 11 points and added three assists in a team-high 28 minutes of action, while senior Michael Rogers (Kingston, Jamaica/Redemption [N.Y.] Christian) narrowly missed a double-double with 11 points and nine rebounds, even of which came on the offensive end.

It didn’t take long Saturday for Valpo to take control, as a 5-5 tie two minutes into the game was quickly turned into a double-digit advantage, thanks to a 15-0 Crusader run over the next four minutes.  Valpo connected on all six of its field goal attempts in the span, including six points from Wood, while five of the six Crusader field goals during the run came on the fast break.

Leading 20-5 just six minutes in, the Crusaders never let the lead fall back into single digits.  Aurora got as close as 10 points at 22-12, but an 11-0 Valpo run later in the half, featuring five points from Wood and four by Broekhoff, pushed the lead up to 23 points.  Valpo eventually took a 51-28 advantage into the locker room at halftime.

The Crusaders then exploded out of the halftime break, coming out and putting a 17-0 run on the board in just 3:47 to increase their advantage to 68-28 with 16:13 to play.  Wood had five points during the run, while sophomore Erik Buggs (Memphis, Tenn./Mitchell) scored four and sophomore Kevin Van Wijk (Hoofddorp, Netherlands/Katholieke Scholengemeenschap Hoofddorp) added three points.

One last run midway through the half gave Valpo its largest advantage of the game, as a 13-2 spurt gave it an 86-36 lead with 11:37 remaining.  Kenney scored seven of his points during the run, capped by a steal and fast-break layup, and the Crusaders cruised to the victory from there.

Valpo ended the game 40-for-63 from the floor, connecting on better than 60% of its field goal attempts in both halves.  The Crusaders outscored Aurora in the paint by a 60-12 margin and created 30 fast-break points.  Aurora was led by 17 points from Mike Bumber as three starters finished in double figures.

Valparaiso opens regular season play at the ARC next Friday, Nov. 12, against IU Northwest.  Tipoff is set for 7:05 p.m., and as always, all the action can be heard live on the Valpo Sports Radio Network (WAKE, 1500 AM, Valparaiso; WEFM, 95.9 FM, Michigan City) and online at www.valpoathletics.com.  Live video through the Horizon League Network will be available as well through the official Crusader website, as well as live stats.