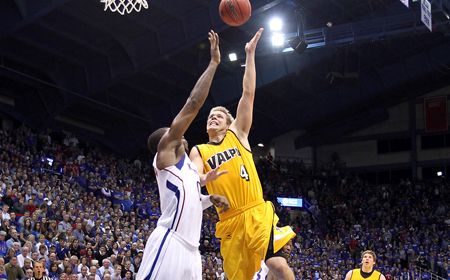 Last Time Out: Shooting 27.4% from the floor proved to be too much for the Crusaders to overcome Monday night, as Valpo fell 79-44 to #7/6 Kansas at Allen Fieldhouse.  Valpo was within six points with under ten minutes to play in the first half, but an 18-4 Jayhawk run provided separation.  Cory Johnson and Kevin Van Wijk each scored ten points apiece to lead the Crusaders, while Marcus (22 points, 11 rebounds) and Markieff (12 points, 13 rebounds) Morris each posted double-doubles for Kansas.

Following the Crusaders: Every game this season will be available on the Valpo Sports Radio Network, with Thursday's game broadcast live on WAKE (1500 AM, Valparaiso), WEFM (95.9 FM, Michigan City) and WJOB (1230 AM, Hammond).  Todd Ickow is back for his 19th season on play-by-play, while Adam Amin will handle the color commentary Thursday.  The live audio will also be available at www.valpoathletics.com, with live video through the Horizon League Network and live stats available through the official Crusader website as well.

Head Coach Homer Drew: One of only a handful of coaches at the Division I level coaching on a floor named in his honor, head coach Homer Drew is the seventh-winningest active coach in D-I men’s basketball.  Drew enters Monday's game with a 349-294 record in 21 seasons at the helm of the Crusader program and a 618-416 record in 32 years overall as a head coach.

Series Notes: Thursday night marks the first time that the Crusaders have faced Purdue North Central on the hardwood.

The Road Ahead: A five-game stretch on the road begins next Tuesday when the Crusaders travel to take on Ohio in the second game of the Las Vegas Invitational.  Valpo will then fly out to Vegas to play Northern Colorado on Friday and either Bethune-Cookman or Texas A&M-Corpus Christi on Saturday.

Scouting Purdue North Central: The Panthers enter Thursday night’s game, which will count as an exhibition contest on their schedule, with an 0-5 record this season, most recently falling 71-64 to Olivet Nazarene, which Valpo beat 93-58 in exhibition action.  Jordan Wiseman led PNC against ONU with six 3-pointers and 20 points, and is one of four Panthers averaging in double figures in scoring this season, led by 13.4 points per game from Jordan Delks.

Taking On the Best: Playing a team ranked among the top-10 in the nation is nothing new for the Crusader men's basketball program.  The Kansas game Monday marked the 11th time since the start of the 2006-2007 season that Valpo has faced off against top-10 teams (Marquette, Ohio State, North Carolina 3x, Butler 2x, Purdue 2x, Michigan State).  Four of those games, the Crusaders played the top-10 foe to within 10 points, including twice when they had a shot to tie at the horn.  In addition, Valpo had a stretch of five straight years from 2004-2009 when it took on the nation's top-ranked team in non-league action.

Home Dominance: Valpo has a total of 15 regular season home games scheduled at the ARC this year, one of the highest totals in program history for a program that has consistently dominated in front of its home fans.  The Crusaders are 226-100 (.693) all-time at the ARC, including a 180-41 (.814) mark over the last 17 years at home.  Valpo has also finished above .500 in each of the last 17 seasons at home.

Offensive Explosion...: The Crusaders lit up the scoreboard throughout their season opener against IU Northwest, scoring 59 first-half points and adding 52 second-half points.  A short-range flip up and in by Cory Johnson with 5:49 to play put Valpo over the century mark as it utilized the third digit on the scoreboard for the first time since a 105-73 win over Longwood on Jan. 7, 2006.  The 111 points matched the most the Crusaders have scored in the last 15 seasons as well.

Followed By Struggles: But Valpo’s second game of the year, at #7/6 Kansas, wasn’t quite so smooth on the offensive end.  The Crusaders’ 27.4% field goal percentage was their worst performance from the floor in at least a decade, while their two 3-pointers was the lowest since hitting just two treys against UMES Nov. 23, 2007.  The 44 points was Valpo’s lowest offensive output since Dec. 2, 2008 at Cleveland State (42).

Offense Leads the Way: The first performance of the year is probably more representative of the results to come this season, based on the way the Crusaders ranked atop the Horizon League in a number of offensive categories a year ago.  Valpo paced the league with 73.2 points per game and also ranked atop the league charts in field goal percentage (.467) and 3-pointers made per game (7.7).  The Crusaders ranked among the nation’s top-50 teams in the latter two categories, as well as assists/game (15.0).

Valpo Tabbed Fourth in Preseason Poll: Valparaiso was picked to finish in fourth place in the Horizon League preseason poll conducted of the league’s coaches, sports information directors, and media members.  The Crusaders tallied 312 points in the polling.  Butler, the reigning national runner-up and last season's regular season and tournament champions, was a unanimous selection atop the league standings.  Detroit edged out Cleveland State as the second pick, while Milwaukee and Wright State were picked fifth and sixth, respectively.  Green Bay, Loyola, UIC and Youngstown State rounded out the polling.

A Look Back at 2009-2010: Valparaiso improved throughout the 2009-2010 season, closing the year with 15 wins.  The Crusaders went 10-8 in league play, finishing in a tie for fourth place in the Horizon League regular season standings.  It marked the second time in Valpo’s first three seasons as a Horizon League institution that it had finished in the top half of the standings.

A Lot of Production Returns: Having lost just one regular and three players in all from last year’s squad, Valparaiso returns the vast majority of its production from last season.  The 10 letterwinners, including four starters, who return for the Crusaders in 2010-2011 comprised 82.8% of the team’s scoring and 91.2% of the team’s rebounding from a year ago.

Wood Named Preseason First Team All-League: Redshirt junior guard Brandon Wood was one of five players named to the preseason Horizon League First Team All-League squad as announced in mid-October.  Wood, the league’s Newcomer of the Year and a Second Team All-League honoree in 2009-2010, led the circuit in scoring at 17.7 ppg a year ago, while his 565 total points tied for ninth-most in a single season in Valpo history.  Also an NABC All-District 12 Second Team choice, he ranked among the league's best as well in 3-pointers per game (1.8, 6th) and free throw percentage (.813, 7th).

Johnson a Second Team Honoree: Fifth-year senior forward Cory Johnson also earned a spot on the preseason All-League Second Team after receiving Second Team and All-Newcomer Team honors last year in his first year with the Crusaders.  Johnson averaged 15.6 ppg and 5.8 rpg a year ago, good for fourth and eighth among Horizon League players, respectively.  He connected at a 55.6% clip from the floor, second-best in the league and 20th nationally, and hit better than half of his three-point attempts as well.

Oh Captain My Captain: The Crusaders will have a pair of captains for the 2010-2011 season.  Cory Johnson and Howard Little will serve in the role, each for the second straight year.

Sun, Fun and Basketball: This year’s Crusader squad got the chance to bond as a team with a preseason foreign trip to Cancun in August, the first time Valpo has taken advantage of the chance to take a preseason trip.  The Crusaders got 10 days of practice in Valpo before taking off for Cancun with all 13 players, including newcomers Jay Harris and Kevin Van Wijk.  While down in Cancun, Valpo won all four games, including a come-from-behind 102-84 win over Pioneros de Quintana Roo, which finished third in the 20-team LNBP last year.

Wood Leads the Way: Wood, who scored 20+ points 12 times in his first year as a Crusader, led the way for Valpo in the season opener against IU Northwest with 20 points in just 20 minutes.  The redshirt junior also matched his career high with six assists, five of which came in the second half, and committed just one turnover.  While Wood scored just nine points at #7/6 Kansas, hs tied for team-high honors with seven rebounds and also dished out a team-best four assists.  He currently leads the Horizon League, averaging 5.0 assists/game.

Van Wijk Gets Aggressive: Sophomore Kevin Van Wijk was perhaps the best Crusader on the court against #7/6 Kansas on Monday.  Van Wijk came off the bench to tie for team-high scoring honors with 10 points, the first double-digit effort of his career, in just 19 minutes of action.

No Sophomore Slump: Sophomore Ryan Broekhoff posted a stellar performance in the season opener against IU Northwest.  Broekhoff hit 7-of-11 from the floor, including all five attempts inside the arc, for 18 points, matching the second-best effort of his career.  The sophomore also grabbed six rebounds and tied his career high with three blocked shots.

Post Presence: Johnson is the only Crusader to reach double figures in scoring in each of Valpo’s first two games.  The fifth-year senior scored 17 points on 8-of-9 shooting in the opener against IU Northwest, and then tied for team-high honors with 10 points at #7/6 Kansas.  Johnson also tied for the team lead with seven rebounds against the Jayhawks as well.

Now Boarding: Despite being just 6'3", senior Howard Little has been one of the Crusaders' best rebounders during his four-year career and showcased that again against IU Northwest.  Little tied for game-high honors with eight rebounds, six of which came on the offensive end.  The senior also scored 17 points on Friday, with four of his six baskets coming directly off of offensive rebounds.  Little pulled down four rebounds as well at #7/6 Kansas and leads the Crusaders with 6.0 rebounds/game.  His .636 field goal percentage also ranks fourth in the league.

A Helping Hand: The Crusaders tallied 29 assists on their 43 field goals in the season opener against IU Northwest, with a trio of players handing out six assists apiece, including the aforementioned Wood.  Redshirt sophomore Erik Buggs registered six helpers, the second-best effort of his career in the category, to go along with four rebounds and three steals.  Meanwhile, freshman Jay Harris also totaled six assists in his collegiate debut while also scoring nine points.

Crusaders Ink Edwards to NLI: Valparaiso men’s basketball head coach Homer Drew announced Nov. 13 that Richie Edwards of Hillsborough [Fla.] C.C. has signed a National Letter of Intent during the early signing period and will join the Crusader program for the 2011-2012 campaign.  Edwards, who will have two seasons of eligibility left when he joins the Crusaders, was a First Team All-Conference selection for the Hawks as a freshman, averaging better than 16 points and seven rebounds per game.  A product of Lakeland H.S., he was named the Lakeland Ledger Player of the Year as a high school senior, leading his squad to the regional finals while posting 17.7 points and 9.5 rebounds per contest.

Quickly: Valpo pulled down 14 offensive rebounds as a team against the Kansas front line, led by three apiece from Johnson and Michael Rogers ... the Crusaders are averaging 16.5 offensive boards/game through two games ... Valpo currently leads the league in both assists/game (19.0) and assist/turnover ratio (1.7).