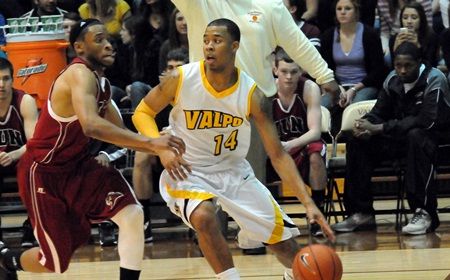 Valparaiso nailed 9-of-11 three-point shots in the second half and held Northern Colorado to just seven second-half field goals as the Crusaders earned a 76-61 come-from-behind victory over the Bears Friday afternoon at the Las Vegas Invitational in Las Vegas, Nev.

The Crusaders' impressive performance from behind the arc in the second half helped spur a 50-point stanza, as Valpo connected on 15-of-23 from the floor overall in the final 20 minutes and also made 11-of-12 attempts from the free throw line.  Meanwhile defensively, Valpo held the Bears to just 29 points while forcing 11 turnovers to overcome a six-point halftime deficit.

Senior Howard Little (Chicago, Ill./Stoneridge [Calif.] School) and sophomore Ryan Broekhoff (Frankston, Victoria, Australia/Australian Institute of Sport) led the charge in the second half, each connecting on all four of their efforts from behind the arc.  Little also came up with a tip-in basket as he ended the second half with 14 of his team-best 18 points on the day.

“I'm really proud of both Howard and Ryan today,” said Crusader head coach Homer Drew.  “They both stepped up in the second half and made some big shots for us.”

The big second half was a complete turnaround from the first half, as the Crusaders struggled mightily shooting the ball over the opening 20 minutes.  Valpo connected on just 6-of-26 from the floor in the first half, including a 1-of-11 effort from behind the arc, and did not make a field goal until over 10 minutes into the ballgame.  Fifth-year senior Cory Johnson (Duluth, Minn./Duluth East [Iowa State]) picked up three fouls in the first 4:30, while sophomore Kevin Van Wijk (Hoofddorp, Netherlands/Katholieke Scholengemeenschap Hoofddorp) was charged with a pair of fouls in the opening four minutes as well.

The Crusaders stayed in the game in the first half thanks to solid defense, holding Northern Colorado to just 32 points in the first half, and their free throw shooting, as they went to the charity stripe 17 times and hit 13.  A fast-break layup by junior Brandon Wood (Kokomo, Ind./Kokomo [Highland C.C./Southern Illinois]) was the Crusaders' first field goal, coming with 9:40 to go in the opening half and cutting the deficit to 11-6.  Northern Colorado extended its lead to as many as 12 points and still led by 10 points at 26-16 with 4:08 to play in the first period, but a 3-pointer by sophomore Matt Kenney (Mooresville, Ind./Mooresville) got the deficit out of double figures for good and a pair of free throws from senior Michael Rogers (Kingston, Jamaica/Redemption [N.Y.] Christian) with four seconds to play cut the Bears' halftime edge to 32-26.

“We were really fortunate to be able to hang around and only be down six at halftime,” said Drew.  “Our defense really kept us in the game.  Our offense in the first half just had no flow and we couldn't hit any shots at all.”

Out of the halftime break, the Crusaders posted a quick 8-0 spurt, starting the second half with a layup by Johnson and then Broekhoff and Little hitting back-to-back triples to claim a 34-32 lead, their first advantage of the ballgame.  UNC responded right back with an 8-1 run over the next 2:14, going up five at 40-35 with 15:42 on a Neil Kingman free throw.

But Valpo answered with an 11-0 run over the next 3:26 to take the lead for good.  Little started the run with another 3-pointer, and Johnson followed with an inside basket to tie the game at 40-all.  Freshman Jay Harris (Aurora, Ill./Oswego East) connected on a pair of free throws and Kenney then stepped up on the defensive end, making a couple of big plays and converting them into transition layups to give the Crusaders a 46-40 lead with 12:16 remaining.

UNC's Devon Beitzel knocked down back-to-back triples for the Bears to briefly tie the game up at 46 apiece with 11:14 remaining, and following a 3-pointer by Wood, the Bears got a tip-in basket by Emmanuel Addo to stay within one point with 9:16 to play.  But the Crusaders again had an answer, scoring eight straight points over the next minute to seize control for good.  Harris connected on two more free throws, followed by a Broekhoff 3-pointer and then another Little trifecta, to claim a 57-48 advantage with 8:16 to play.

Northern Colorado had one more attempt to slice into the Valpo edge, cutting the lead down to 62-55 with 5:18 remaining after a pair of Beitzel free throws, but again Broekhoff stepped up, immediately hitting a triple to push the lead back to 10 points.  Wood then went in for a two-handed fast-break slam off a steal by sophomore Erik Buggs (Memphis, Tenn./Mitchell) and Broekhoff slammed the door with yet another trifecta to push the game out of reach.

“We really played well in the second half,” said Drew.  “We maintained our defensive intensity and ended up forcing 23 turnovers for the game.  It's also amazing how after hitting a couple 3-pointers, everything just starts falling into place and going well.”

Little's 18 points marked the second-best effort of his career, as the senior finished the game 7-of-9 overall from the floor.  One game after setting a new career high, Broekhoff again finished in double figures with 15 points, while Kenney matched his season high with 11 points off the bench.  Rogers pulled down a team-high five rebounds off the bench and Wood maintained his average by dishing out a game-high six assists.

Northern Colorado (2-3) got 23 points from Beitzel to lead all players.  Addo scored 12 points and grabbed nine rebounds off the bench in the losing effort, while Kingman added 11 points and seven boards.

“I was pleased at the game with our ballhandling, especially by Erik,” said Drew.  “I thought Mike did a great job off the bench today as well; he played strong to get inside and grab some key rebounds and also made some big free throws.  I just thought it was a great team effort and I was impressed with our grit, as we just kept playing hard throughout.”

Valparaiso (3-2) advances to play Texas A&M-Corpus Christi, which defeated Bethune-Cookman in the first game Friday, Saturday afternoon at 4 p.m. CST.  All the action can be heard live on the Valpo Sports Radio Network (WAKE, 1500 AM, Valparaiso; WEFM, 95.9 FM, Michigan City) and online at www.valpoathletics.com, which also will have links for live stats and a live video webcast available for a fee through IBN Sports.