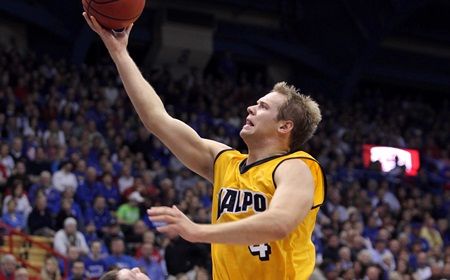 Despite holding a 13-point lead with 16 minutes to play Saturday evening in Toledo, Ohio, Valparaiso had to overcome a five-point deficit in the final minute to force overtime and then couldn't rebound from a similar hole in the extra sessions, dropping a 75-72 decision to Toledo.

“You have to credit Toledo, they hung around for awhile and then made plays to give themselves momentum,” said Crusader head coach Homer Drew.  “I thought we missed Erik's intensity on the defensive end tonight.”

The game got out to a good start for the Crusaders, who never trailed again in the opening 20 minutes after giving up the first basket.  Sophomore Ryan Broekhoff (Frankston, Victoria, Australia/Australian Institute of Sport) knocked down a pair of early trifectas as part of eight quick points as Valpo led 12-6 just 3:49 into the ballgame.

Toledo fought back to tie the game at 16 apiece just over seven minutes in, but Valpo scored the next seven points to give itself some breathing room.  Freshman Jay Harris (Aurora, Ill./Oswego East) connected on his second 3-pointer of the first half, followed by a pair of free throws by Broekhoff and a fast-break layup by junior Brandon Wood (Kokomo, Ind./Kokomo [Highland C.C./Southern Illinois]) off a steal from sophomore Matt Kenney (Mooresville, Ind./Mooresville) to give the Crusaders a 23-16 edge with 9:30 remaining in the half.

The Crusader lead remained in the realm of two to three possessions for the duration of the first half.  Toledo closed back to within 29-25 with four minutes remaining in the stanza, but sophomore Kevin Van Wijk (Hoofddorp, Netherlands/Katholieke Scholengemeenschap Hoofddorp) hit a pair of free throws to slow the Rockets' momentum and Harris connected on a shot clock-beating triple to extend the lead to nine points with 1:24 on the clock.  Toledo's Anthony Wright hit a triple with 41 seconds to go until the break to cut the advantage to six, but Wood ran down the shot clock and converted a driving layup to send Valpo into the locker room leading 36-28.

Valpo pounded the ball down low to senior Cory Johnson (Duluth, Minn./Duluth East [Iowa State]), who after scoring nine first-half points added eight more in the first three minutes of the second half, including a pair of old-fashioned 3-point plays.  Toledo hit a trio of buckets of its own to keep the deficit manageable, but senior Howard Little (Chicago, Ill./Stoneridge [Calif.] School) knocked down a 3-pointer with 16:28 to play to give the Crusaders their largest lead at 47-34.

Toledo cut its deficit to 10 points on a basket and a free throw, but yet another conversion in the paint by Johnson pushed Valpo's lead back up to 12 points at 49-37 with 14:53 remaining.  The Crusaders went cold from the floor at that point, failing to score on any of their next five offensive possessions, and the Rockets took advantage.  Malcolm Griffin scored three inside baskets, including a pair of second-chance opportunities, as part of a Toledo 10-0 run that brought Valpo's lead down to 49-47 with 11:23 to play.

“I thought it was a key time when we were up 13 and couldn't extend the lead any further,” said Drew.  “Toledo started double-teaming Cory in the post and we did not handle the ball well.  Then, while they were making their run, we didn't have anybody step up and hit a shot to help keep it a two or three possession game.”

Senior Michael Rogers (Kingston, Jamaica/Redemption [N.Y.] Christian) briefly quelled the Rocket spurt with an easy layin underneath, but that only temporarily halted the home team's momentum.  Wright would tie the game with a 3-pointer with 7:13 left, and then a second-chance bucket by Reese Holliday gave Toledo the 54-52 lead at 6:35, its first lead since 2-0.

Nearly two minutes later, Wood found a wide-open Van Wijk under the hoop for an easy layup to tie the contest, but the Rockets responded immediately with Wright's fourth triple of the game to take a 3-point lead.  A layup by Holliday extended the Toledo edge to five, and Valpo, with its backs suddenly against the wall, went back to the well in the post, getting back-to-back inside baskets from Johnson to move back within 59-58 with 2:08 remaining.

Valpo came up empty on its next two possessions, and Toledo knocked down a quartet of free throws to seemingly have the game in control, leading 63-58 with 48 seconds to play.  But Wood would not let the Crusaders go down that easily, coming down and nailing a quick 3-pointer to move Valpo back to within two points.  Then the junior came up with a play on the defensive end, sagging off on a trap and leaping to intercept a pass before taking it coast-to-coast to tie the game with 26 seconds left.  Toledo had the final shot of regulation, but sophomore Erik Buggs (Memphis, Tenn./Mitchell) forced a tough jumper by Griffin that came up well short as the game went into overtime.

Unlike the last time the Crusaders rallied from a late deficit to force overtime, however, they would never lead in this extra session.  Valpo connected on just one of its first six shots in extra time as Toledo led by as many as six points after Jay Shunnar split a pair of free throws with 27 seconds to play.  Wood immediately drove the length of the court for a layup to cut the deficit to four points, and after Shunnar missed two freebies, the junior drilled a 25-foot 3-pointer as the Crusaders moved back within 73-72.  But Holliday would hit two free throws to give the Rockets a three-point edge, and Wood's final attempt from downtown was off the mark.

Johnson led all players Saturday with 25 points, going 11-of-21 from the floor.  The fifth-year senior also paced the Crusaders in the rebounding column with seven caroms.  Wood added 17 points, five rebounds and a game-high six assists, while Broekhoff was the third Crusader in double figures with 12 points.  Kenney grabbed four boards, handed out five assists and tallied three steals while earning his first start of the year at point guard, as Buggs was limited to just eight late minutes due to injury.

Toledo (1-9) placed five players, including four starters, in double digits, led by 16 points from Holliday.  Holliday also ripped down ten rebounds, one of two Rocket starters to finish with a double-double as Hayden Humes went for 10 points and 14 rebounds.  Toledo committed 17 turnovers to Valpo's 11, but finished with a 48-34 rebounding edge and went 20-of-30 from the foul line versus the Crusaders' 10-of-19 clip.

“I thought the two keys from our side were offensive rebounding and free throws,” said Drew.  “We gave up 18 offensive rebounds tonight [leading to 20 Toledo second-chance points] and then went just 10-of-19 from the line.”

Valparaiso (6-4) returns to the court next Saturday at the ARC as the Crusaders host IPFW.  Tipoff is set for 7:05 p.m., and all the action can be heard live on the Valpo Sports Radio Network and online at www.valpoathletics.com, which will also have links for live video and live stats.