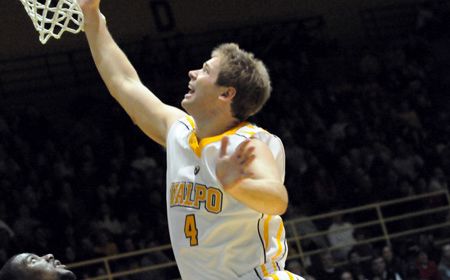 “I thought that, in the second half, our players did a wonderful job,” said Crusader head coach Homer Drew.  “Erik and Howard really set a good, aggressive tone on the defensive end to start the half and we were able to put together a big run to give us a comfortable lead.”

Johnson went 10-of-16 from the floor, including a pair of rim-rattling dunks, and also connected on 6-of-7 from the charity stripe for his second-best scoring output of the year.  The senior has now scored in double figures in seven straight contests and leads the Crusaders on the year with 16.5 ppg.

It was a quick start on both ends of the court for the Crusaders Friday, as after surrendering five points in the game’s first 1:27, Valpo would not give up a point to YSU for seven and a half minutes.  The defensive effort sparked an 11-0 run which gave the Crusaders a double-digit lead at 15-5 just over seven minutes into the game.  Wood and Johnson combined for nine points during the spurt, while Little capped it with a fast-break layup off a long outlet feed from senior Michael Rogers (Kingston, Jamaica/Redemption [N.Y.] Christian).

The Penguins wouldn’t go away that easily, scoring the next eight points to move right back within two points as the Crusaders went scoreless for over five straight minutes.  YSU eventually tied the contest at 20 with 5:15 to go in the half on a triple by Ashen Ward, but freshman Jay Harris (Aurora, Ill./Oswego East) answered with back-to-back 3-pointers to spark a 10-2 spurt that pushed Valpo’s lead back to eight points, and the Crusaders eventually took a 34-29 edge into the locker room.

Valpo erased almost all doubt about the game’s eventual outcome out of the halftime break, starting the second stanza on a 20-4 run over the first seven minutes.  Wood scored the first two baskets of the half within the first 65 seconds, and also had a baseline one-handed slam off a feed from Johnson a couple minutes later.  Wood then reciprocated on the fast break with a slick behind-the-back pass to Johnson for a slam on the next possession.  Little and Wood each had six points apiece in the run, while Johnson added four points and Rogers also converted a pair of layups for four points as well.

“It was huge to put together that run out of the locker room,” said Drew.  “It gave us a double-digit lead, which we never gave up after that.  Brandon and Cory really saw the floor well during that stretch, and the whole team execute well, made good passes and got good shots.”

Youngstown State (6-8, 1-4 Horizon) had one last burst left, as Blake Allen hit three 3-pointers in a span of 1:38 approaching the halfway mark of the stanza to push the Penguins back into the game.  A fast-break layup by Devonte Maymon with 10:34 to play cut the Crusader edge to 56-44, but YSU connected on just two field goal attempts over a nearly seven-minute stretch immediately following as Valpo pulled away.

Johnson scored six points, including a thunderous one-handed dunk while being fouled, during the last big Valpo run, while sophomore Kevin Van Wijk (Hoofddorp, Netherlands/Katholieke Scholengemeenschap Hoofddorp) added four points and sophomore Ryan Broekhoff (Frankston, Victoria, Australia/Australian Institute of Sport) capped the 15-5 run with a 3-pointer with 4:08 to go to put Valpo ahead 71-49.  Junior Cameron Witt (Launceston, Tasmania, Australia/Launceston) made his season debut in the final three minutes and scored Valpo’s last two baskets, the second of which capped the scoring and gave the Crusaders their largest lead and the final margin.

For the fourth time in the last five games, Valpo connected on better than half its shots, going 32-of-59 (.542) from the floor.  Even when the Crusaders missed, they gathered half the available rebounds, securing 14 offensive boards and converting into 15 second-chance points.  The effort on the offensive glass mirrored the output on the other end, as the Crusaders out-rebounded Youngstown State 47-24, led by a Valpo season-high 10 rebounds from Broekhoff.  The Crusaders also dominated the points in the paint, out-scoring YSU 52-20 inside.

“It was big for us to be able to out-rebound them by 47-24,” said Drew.  “Ryan really did a great job on the defensive glass to grab 10 rebounds, really worked hard along with his teammates to hold Youngstown State to just one shot.”

Youngstown State was led by 17 points from Allen, who hit 5-of-6 from behind the 3-point line.  Damian Eargle was the only other Penguin in double figures, scoring 15 points while also grabbing eight rebounds and blocking four shots.  Valpo held Vytas Sulskis, who entered the game averaging 15.5 ppg, to just six points on 2-of-7 shooting Friday.

Valparaiso (11-5, 3-1) is now tied for first place in the loss column and welcomes one of the teams it’s tied with, Cleveland State, to the ARC for a Sunday afternoon matinee.  All the action can be heard live on the Valpo Sports Radio Network and online at www.valpoathletics.com, which will also have links for live video and live stats.