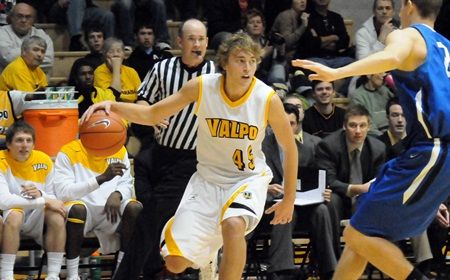 Valparaiso could not overcome a nine-minute stretch without a field goal late in the second half Sunday afternoon, as the Crusaders’ last-minute comeback effort came up two points short in a 63-61 loss to Green Bay at the Athletics-Recreation Center.  Despite the loss, the Crusaders remain tied atop the Horizon League standings at the end of the first half of league action.

“I thought it was really a game of two stretches today,” said Crusader head coach Homer Drew.  “We really finished the first half strong to get the halftime lead, but then in the second half, [Green Bay] held us without a field goal for that long stretch and our defense just got tired.  I was proud of our heart and determination in those final couple minutes to fight back and not give up.”

It was a slow start to the game for both teams on Sunday, as neither team could crack double figures on the scoreboard until 9:36 to go in the first half, when fifth-year senior Cory Johnson (Duluth, Minn./Duluth East [Iowa State]) hit a short jumper in the paint to put Valpo ahead 10-8.  Johnson followed with a jumper on the fast break, and then sophomore Erik Buggs (Memphis, Tenn./Mitchell) found senior Michael Rogers (Kingston, Jamaica/Redemption [N.Y.] Christian) for a fast-break layup to quickly increase the edge to 14-8 with 8:37 left in the half.

But the Crusaders would go scoreless for the next four-plus minutes, allowing the Phoenix to reel off a 10-0 spurt to claim an 18-14 advantage.  Sophomore Ryan Broekhoff (Frankston, Victoria, Australia/Australian Institute of Sport), who played just three minutes Friday due to injury, stepped up and hit a pair of 3-pointers to move Valpo back into the lead.  Sophomore Matt Kenney (Mooresville, Ind./Mooresville) continued the run with a steal and finished with his second fast-break dunk of the half, and then found Johnson for a 3-pointer in the final minute as Valpo closed the first half on an 11-0 run to go into the break ahead 25-18.

Broekhoff continued his hot shooting with another 3-pointer to open the scoring on the Crusaders’ first possession of the second half, giving Valpo a double-digit lead.  The lead was still eight after a Kenney layup at the 17:29 mark, but Valpo went nearly four minutes without a field goal from that point.  Alec Brown scored all seven points for the Phoenix as part of a 7-1 mini-spurt that brought Green Bay back to within 33-31 with under 14 minutes to play.

Kenney broke the Crusader drought from the field with an old-fashioned 3-point play on the next trip, and Johnson followed with a pair of free throws to push the lead back to 38-31.  But the resilient Phoenix scored the next six points to again move within one possession with 11:47 to go.  The two squads traded points on their next few trips, with another inside bucket by Kenney at the 10:04 mark giving Valpo a 45-42 edge.

But it was then that the Crusaders went into their extended field goal drought.  A pair of free throws by Kenney with 8:48 to play made it a four-point Valpo advantage, but wouldn’t be enough to stave off a 12-2 Phoenix run that concluded with under two minutes to play.  In fact, Valpo was held without a point for nearly seven minutes following the Kenney free throws, finally cracking the scoreboard again on a pair of free throws by Johnson with 1:42 remaining to make it a 54-49 ballgame.

Green Bay’s Daniel Turner tipped in a miss on the Phoenix’s next possession, but that basket was answered by a layup by senior Howard Little (Chicago, Ill./Stoneridge [Calif.] School) with 55 seconds to go to again make it a five-point game.  After a pair of free throws by Seth Evans, Johnson canned a 3-pointer to cut the deficit to 58-54, and the senior then split a pair of freebies after Green Bay’s Bryquis Perine missed the front end of a one-and-one.

Brown hit two more free throws with 22 seconds to play to give the Phoenix a 60-55 edge, but Broekhoff refused to let the Crusaders go quietly, hitting a closely-guarded fall-away 3-pointer in front of the Valpo bench with 11 seconds to go to move Valpo within two points.  After Brown hit two more free throws, it was again Broekhoff keeping Valpo alive, knocking down a triple from the top of the key with under three seconds to play to make it a 62-61 game.  After Turner split two free throws, Valpo had the ball out-of-bounds trailing by two with 1.1 seconds left, but the ¾ court pass went off a Crusader and out of play.

Valpo, playing without leading scorer Brandon Wood for the second straight game due to injury, struggled offensively, hitting just 38.2% (21-of-55) of its field goal attempts, its second-worst showing of the year.  The Crusaders were led by 17 points from Johnson and 15 points on five 3-pointers from Broekhoff.  Kenney had a solid all-around game in a career-high 36 minutes of action, going for 13 points and team highs of seven points, four assists and five steals, the latter also matching his career high in the category.

“I thought Ryan was very courageous today,” said Drew.  “He really played hard despite his injury and made some big shots for us.  Ryan also stepped up and took a couple of big charges as well.”

“You really have to compliment Brown,” said Drew.  “As a 7’1” freshman, stepping up and hitting 4-of-4 free throws in the final minute is just clutch.  He also is a big presence defensively and really made it tough for us to get easy shots from down low.  Now we have a week to get healthy and take some time to heal, hopefully to get everyone in our rotation back healthy in time for next Saturday’s game.”

Valparaiso (15-6, 7-2 Horizon) hosts Butler in the Horizon League Game of the Week from the ARC next Saturday.  Tip time is slated for 1 p.m., with the telecast available locally on Comcast SportsNet Chicago and throughout the Horizon League markets on various stations.  As always, the game can also be heard live on the Valpo Sports Radio Network and online at www.valpoathletics.com, which will also have a link for live stats.