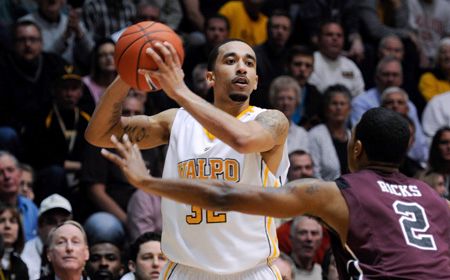 In front of a sellout crowd and national television audience on ESPN2, Valparaiso made its stamp on the Sears BracketBusters event with a stellar performance, shooting over 58% from the floor and leading nearly start to finish in an 80-67 victory over Missouri State Saturday afternoon.

Redshirt junior Brandon Wood (Kokomo, Ind./Kokomo [Highland C.C./Southern Illinois]) poured in a game-high 24 points to lead the effort on Saturday.  Wood had seven points and all five of his assists in the first 20 minutes to help stake Valpo to a 15-point halftime edge, and then took over the scoring duties in the second half with 17 points.  Wood also pulled down five rebounds and tied his career high with four steals.

Missouri State scored the game’s first basket, but Valpo responded with four inside baskets on its first four trips, forcing an early Bears timeout at 8-2.  Senior Michael Rogers (Kingston, Jamaica/Redemption [N.Y.] Christian) hit a pair of triples off the bench in the first eight minutes to help the Crusaders keep the advantage, but a 3-pointer by MSU’s Kyle Weems at the 11:16 mark put the Bears back ahead, 15-14.

But Wood knocked down a baseline jumper on the Crusaders’ next possession, and Valpo never trailed again.  The junior’s bucket kick-started an 18-4 Crusader run over the next six minutes.  Highlights of the big spurt included a putback on the fast break by sophomore Kevin Van Wijk (Hoofddorp, Netherland/Katholieke Scholengemeenschap Hoofddorp), an alley-oop from midcourt on the break from Wood to sophomore Matt Kenney (Mooresville, Ind./Mooresville), five points by Little and an alley-oop from freshman Jay Harris (Aurora, Ill./Oswego East) to Rogers for a slam with 5:24 to play in the half.

Wood found Johnson for a fast-break layup just 40 seconds later to cap the big run, giving Valpo a 32-19 edge with under five minutes to play in the opening half.  Missouri State scored the game’s next two baskets to cut the deficit back to single digits, but the Crusaders held MSU scoreless for the final 3:30 of the half to go on a 6-0 spurt.  Wood came up with a steal and found Broekhoff on the fast break for a layup, and then Wood pulled up in transition for a triple after another Crusader steal.  A free throw in the half’s final minute gave Valpo a 38-23 edge into the locker room for halftime.

“I thought there were two key time periods today for us,” said Crusader head coach Homer Drew.  “At the 11 minute mark, we were down one, but made a run that really got the crowd going and got them into the game, helped us get momentum on our side.  Then I thought we really closed the half strong as well.”

The Crusaders scored the first basket of the second half on a dunk by Wood, but the Bears started to chip away at the lead, scoring 14 of the next 20 points to move within 46-37 with 14:27 to play.  But from that point, Valpo held Missouri State to just two field goals over the next five minutes, helping the Crusaders to again extend the lead and put the game away.

Broekhoff knocked down a turnaround jumper in the paint to start the spurt, and Wood knocked down another triple to push the Valpo advantage to 14 points.  Then Johnson took over, answering an MSU 3-pointer with a triple of his own and then responding with a layup after the Bears got a fast-break basket.  The senior then took it inside again on Valpo’s next trip, converting the old-fashioned 3-point play with 10:31 to go to extend the lead to 17 points.  An acrobatic tip-in by Little on the next possession capped the 15-5 run, putting the Crusaders ahead 61-42 with 9:48 to play, and Missouri State got no closer than 12 points the rest of the way.

Kenney had a solid effort off the bench to complement the four starters in double figures, grabbing five rebounds and handing out five assists without committing a turnover in 21 minutes of play.  The Crusader offense, which dished out 20 assists on its 32 baskets, shot at a 58.2% (32-of-55) clip for the game.  Valpo also hit 45% (9-of-20) from behind the 3-point line.

Missouri State (21-7) was led by 17 points by Weems, but the MVC Player of the Year candidate needed 21 shots to get there.  Jermaine Mallett added 14 points and a game-high nine rebounds, while Nafis Ricks scored 11 points as well.

“Missouri State is a good shooting team,” said Drew.  “I thought we did a wonderful defensive job holding them to only 40% shooting as a team.  Our guards did a great job denying open 3-point shots as well (only five 3-point makes).”

Valparaiso (20-8) makes its final road trip of the regular season in a quick turnaround, heading up to Green Bay for a critical Horizon League showdown on Monday night at 7 p.m.  As always, all the action can be heard live on the Valpo Sports Radio Network, and online at www.valpoathletics.com, which will also have links for live stats and live video through the Horizon League Network.