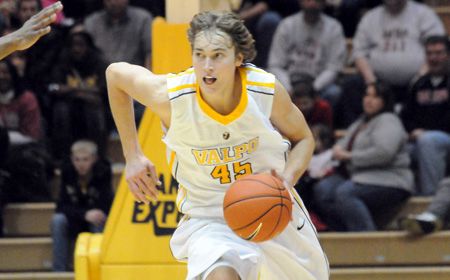 Despite trailing by 16 points in the first half and by as many as 11 in the second half, Valparaiso forced the game into overtime and led by two points with under 30 seconds to play, but Green Bay scored the final three points within the last 20 seconds to close out the game, as the Phoenix defeated the Crusaders 81-80 Monday night in Green Bay, Wis.

Down by three points inside the final two minutes of regulation, sophomore Matt Kenney (Mooresville, Ind./Mooresville) found junior Brandon Wood (Kokomo, Ind./Kokomo [Highland C.C./Southern Illinois]) for a 3-pointer from the right corner to tie the game with 1:45 remaining.  After the teams traded empty possessions, Green Bay's Bryquis Perine hit a deep jumper to give the Phoenix a 72-70 lead with the shot clock off.  But out of a timeout, senior Cory Johnson (Duluth, Minn./Duluth East [Iowa State]), in the high post, fed sophomore Erik Buggs (Memphis, Tenn./Mitchell) all alone underneath the hoop for a layup to tie the game with 24 seconds left.

Green Bay came down and ran the clock nearly all the way down, until Perine took a contested 3-pointer in the final seconds that caromed off the rim to Kenney.  The Crusaders alertly called timeout with 0.8 seconds remaining on the clock, getting the ball out-of-bounds on the sideline 60 feet from their basket.  Sophomore Ryan Broekhoff (Frankston, Victoria, Australia/Australian Institute of Sport) threaded a bounce pass along the sideline to Buggs, who got open in the near corner for a 3-point attempt.  But Buggs' shot rattled around and out, sending the game into overtime.

The Phoenix scored on each of its first two possessions in overtime, while Wood hit another triple as the Crusaders trailed by one.  Over two minutes went by with neither side scoring until Perine drove for a layup to put Green Bay up 78-75 with 1:36 remaining, but Wood answered with a long jumper 19 seconds later to bring Valpo back within one.  The Crusaders were called for a foul on the next defensive trip, but it was only their seventh team foul, and Green Bay missed the front end of a one-and-one to give Valpo the ball back with under a minute remaining.

The Crusaders ran the shot clock most of the way down, and as it hit single digits, the ball was fed to the post to sophomore Kevin Van Wijk (Hoofddorp, Netherlands/Katholieke Scholengemeenschap Hoofddorp).  Van Wijk put the ball on the floor, turning into the lane to avoid the double-team, and kicked the ball to the opposite wing, where Broekhoff was open.  Broekhoff coolly drilled his fifth triple of the game, giving Valpo an 80-78 lead with 33 seconds to go.

Perine was fouled on Green Bay's possession and hit the first free throw before missing the second, but the loose ball was corralled by senior Howard Little (Chicago, Ill./Stoneridge [Calif.] School), who lost his balance as he was rebounding and fell to the ground.  The travel gave the ball back to the Phoenix, and Perine knocked down a 15-footer with 11 seconds to play to put Green Bay in front.  Valpo had one last shot for the win, but Wood's baseline jumper was off the mark.

Green Bay jumped all over the Crusaders from the beginning, using an early 7-0 run to gain control.  The Phoenix eventually led by as many as 16 points at 34-18 with 6:03 to go in the first half, but the Crusaders put together an 11-0 run over the next 2:10 to get back into the game.  Wood had five points during the stretch, including a 3-pointer with 4:24 to go in the half which put him over the 1,000-point milestone for his career.  Valpo got as close as five points and eventually went into the locker room trailing 41-33.

The Phoenix extended the lead back out to 11 points just after the first media timeout of the second half, but a few minutes later, the Crusaders compiled a 7-0 spurt on baskets by Van Wijk and Kenney and a triple from Broekhoff to get to within 55-54 with 10 minutes to go.  Green Bay's lead fluctuated between one and two possessions over the next few minutes, until Valpo put together a 9-2 run, capped by a dunk from Wood, to take the lead at 67-66 with 3:57 remaining.  Alec Brown knocked down a turnaround jumper on the Phoenix's next trip, however, and Fletcher hit a deep jumper two possessions later to set up the closing stretch of regulation.

Wood led Valpo Monday with 24 points, including a quartet of 3-pointers, while Broekhoff knocked down 5-of-6 from behind the arc en route to 20 points.  Little added 11 points as well.  Kenney registered team highs of six rebounds and seven assists, and Buggs dished out six assists without committing a turnover on the evening.

Valparaiso (20-9, 11-5 Horizon) close out the regular season at the ARC with a pair of home league games, the first of which is slated for Thursday evening at 7:05 p.m. against Loyola.  As always, all the action can be heard live on the Valpo Sports Radio Network and online at www.valpoathletics.com, which will also have links to live video through the Horizon League Network and live stats.