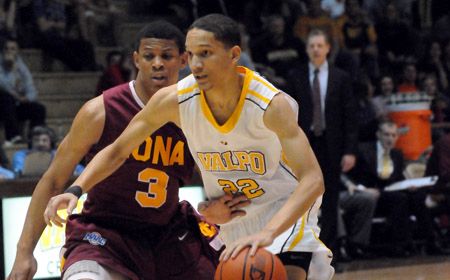 Valparaiso cut a double-digit second-half deficit to six points on multiple occasions in the final 20 minutes, but could get no closer, as the Crusaders dropped an 85-77 decision to Iona Wednesday evening in the first round of the 2011 CollegeInsider.com Tournament at the Athletics-Recreation Center.

“I hate for our season to end the way it did tonight,” said Crusader head coach Homer Drew.  “We did not play as well as we wanted.  Iona is certainly a very good opponent; they’re very strong inside and their perimeter players shot the ball well tonight.  We struggled to shoot on our end tonight.”

The Crusaders opened the game with a second-chance 3-pointer from sophomore Ryan Broekhoff (Frankston, Victoria, Australia/Australian Institute of Sport) just 23 seconds in, but that would be their only lead of the contest.  Iona scored 13 of the next 15 points over a stretch of 3:33, hitting its first three 3-point attempts during that span, to go ahead by eight points less than four minutes into the ballgame.

The Gaels continued to increase their lead, pushing it all the way up to 13 points at 28-15 with eight minutes remaining in the first half.  But Valpo scored six straight points over the next 2:40, getting a pair of inside buckets from fifth-year senior Cory Johnson (Duluth, Minn./Duluth East [Iowa State]) and a fast-break layup from senior Howard Little (Chicago, Ill./Stoneridge [Calif.] School) to slice into the Iona lead.

The Gaels got a second-chance basket to snap the Crusader spurt, but redshirt junior Brandon Wood (Kokomo, Ind./Kokomo [Highland C.C.]) answered with a triple to bring the deficit down to six points at 30-24 with 4:38 remaining in the half.  After the teams traded baskets, the Gaels ripped off seven straight, but Little scored back-to-back baskets from close range to snap the spurt, and the Crusaders eventually went into the locker room trailing 41-32.

Valpo made a number of runs at Iona in the first part of the second half, but every time it was thwarted by an answer from the Gaels on their very next possession.  A mid-range jumper and 3-pointer on back-to-back trips by freshman Jay Harris (Aurora, Ill./Oswego East) brought Valpo within 45-39 with 16:25 to play, but Iona answered with a deep jumper from Mike Glover.  With 14:22 to go, Harris found senior Michael Rogers (Kingston, Jamaica/Redemption [N.Y.] Christian) for a driving layup to again cut the margin to six, but Iona responded with a dunk by Alejo Rodriguez and a triple by Sean Armand on its next two trips.

Another 3-pointer by Harris and a tip-in by Little brought the Crusaders to within 54-48 with 12:50 remaining, but a layup by Glover stopped that attempt to get any closer.  Little scored another inside basket with 11:05 to play to again make it a two-possession ballgame, but Valpo would go scoreless over the next 2:30 as Iona extended its lead to 12 points.

Harris’ fourth three of the second half and a fast-break basket from Wood stopped the Gaels’ spurt and brought Valpo back within 62-55 with 8:07 to go, but that proved to be the last chance, as Iona went on a 12-2 run over the next four minutes to take control for good.  A combination of making late baskets and taking advantage of Iona misses at the free throw line helped the Crusaders chip into the lead late, but they would get no closer than the final margin.

“I loved the way we fought all the way to the end tonight,” said Drew.  “I’m proud of this group of players and what they were able to accomplish this year.  They stuck together and fought together all year long.”

Harris paced the Crusaders with a game and career-best 20 points on Wednesday, scoring 18 of his points in the final 20 minutes.  Little went 7-of-10 from the floor in his final collegiate game for 15 points, while also grabbing six rebounds, while Johnson, also playing his final game, posted 14 points and six boards.  Broekhoff registered team-highs of eight rebounds and four assists as well.

The loss ends the Crusaders’ season at 23-12, their winningest season since the 2001-2002 campaign.  Along the way, Valpo captured a pair of in-season tournament titles for the first time in program history while also setting new program bests for Horizon League wins (12) and league finish.  Individually, Wood concluded the season with 55 steals, the sixth-best single-season total in program history.

The loss also wraps up the career of Valpo’s three seniors.  Johnson closes his two-year career with 979 total points, averaging 14.8 ppg, 12th-best in Valpo history.  He shot at a .519 clip for his Crusader career, seventh-best in the team’s record book, while also pulling down 5.0 rpg.  Rogers concludes his career with 129 games played, tied for second-most all-time at Valpo, and scored 749 total points while grabbing 438 rebounds.

Little set a new program record earlier this year for career games played and closed his career Wednesday with his 133rd appearance in a Crusader uniform.  He also ranks among Valpo’s all-time best in steals, sitting in eighth place with 145 career thefts.  Little scored 931 career points, averaging 7.0 per game, and pulled down 495 career rebounds as well.

“We will miss these seniors,” said Drew.  “They’ve made great contributions to our program over their time here.  They never had a bad day of practice and worked hard to get better every day.”