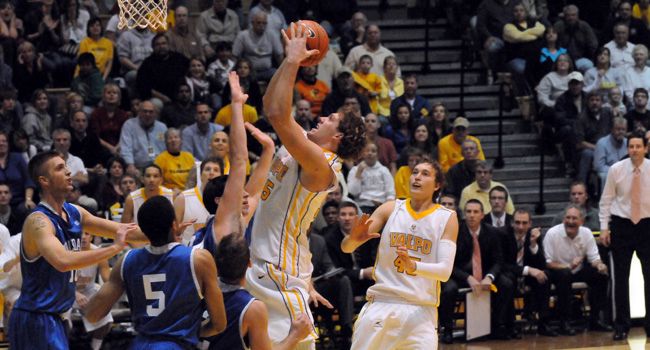 A back-and-forth final two minutes of basketball at the Athletics-Recreation Center Saturday evening was decided on a three-point play by junior Kevin Van Wijk (Hoofddorp, Netherlands/Katholieke Scholengemeenschap Hoofddorp) with five seconds remaining, as Valparaiso earned a 73-71 victory over Hillsdale in the Crusaders’ first exhibition game of the year.

In a second half that saw neither team able to gain more than a six-point lead, it was the junior post player who made the last basket of the night and the one that counted the most.  The Crusaders inbounded the ball having to go the length of the court trailing by one point with 10.1 seconds left.  Redshirt junior Will Bogan (Boise, Idaho/Vallivue [Ole Miss]) sprinted the ball up the court and got to the baseline near the paint, delivering a bounce pass underneath to Van Wijk.

Van Wijk put up an attempt from in close while being fouled, and the ball hung on the rim for a couple of seconds before finally falling through to put the Crusaders ahead 72-71.  The junior added the free throw to close out the three-point play and make it a two-point game.  Hillsdale had one last effort, but a running 3-pointer from 25 feet by Tyler Gerber just before the buzzer never made it to the rim as Valpo secured the victory.

Another three-point play by Van Wijk just a couple minutes earlier tied the game at 63-all, as junior Matt Kenney (Mooresville, Ind./Mooresville) found Van Wijk in deep underneath and he converted while being fouled.  Tony Nelson responded with a 3-pointer at the 1:38 mark to again put Hillsdale up three points, but Kenney picked up another assist on the next trip, hitting sophomore Jay Harris (Aurora, Ill./Oswego East) in the left corner for a game-tying trifecta with 1:24 to play.

Hillsdale got a layup from Brandon Pritzl on its next trip, and Van Wijk followed by splitting two free throws as Valpo trailed by one with 43 seconds to play.  The Crusaders got the ball back after a turnover by the Chargers with 30 seconds to go, and Valpo got a big shot by junior Ryan Broekhoff (Frankston, Victoria, Australia/Australian Institute of Sport), who hit a triple from the top of the key with 20 seconds to go that seemingly would be the game-winner, as the Crusaders led 70-68.  But Hillsdale came right back and got an old-fashioned 3-point play from Gerber with 11 seconds to go, setting up Van Wijk’s heroics.

“I’m extremely proud of the way we played those last five minutes,” said Crusader head coach Bryce Drew.  “Some teams might have folded, especially with it being an exhibition game, but I thought we continued to work hard and made plays when we needed to at the end.  We’ve been preaching defense to our team all preseason, and I thought our guys really played hard defense for 40 minutes tonight, forcing 17 turnovers.”

The back-and-forth nature of the final few minutes was a microcosm of the game as a whole, as the Crusaders were challenged by a tough Hillsdale team which returned four starters from a 20-win team a season ago that was ranked as high as #4 in the D-II national polls.  The Crusaders used a 7-0 run midway through the first half to take a 22-14 lead, but the eight-point margin would be the largest for either side, as Hillsdale crawled back to within two points at halftime.

“Hillsdale is an excellent team – they were ranked in the top-five in D-II last year at one point – and they’re also a very veteran team, starting three seniors,” said Drew.  “When we scheduled this game, along with our game against Augustana, our goal was to test ourselves against some of the toughest non Division-I teams in the region.”

Van Wijk led Valpo with 23 points on 8-of-11 shooting from the floor while also adding seven rebounds.  Broekhoff added a double-double, dropping 20 points and ripping down a game-high 12 boards.  Harris was the only other Crusader in double figures, ending the night with 10 points, while Kenney handed out a game-high five assists.

Pritzl paced Hillsdale with 19 points on 7-of-8 shooting, including a perfect 4-of-4 effort from downtown.  The Chargers knocked down 10-of-17 (58.8%) efforts from behind the 3-point line as a team, but the Crusaders enjoyed the advantage at the charity stripe, connecting on 26-of-39 versus 9-of-15 for Hillsdale.

Valparaiso concludes exhibition play this Thursday, November 3 as the Crusaders host Augustana at 7:05 p.m.  The action can be seen live on the Horizon League Network, with a link for live stats also available at www.valpoathletics.com.