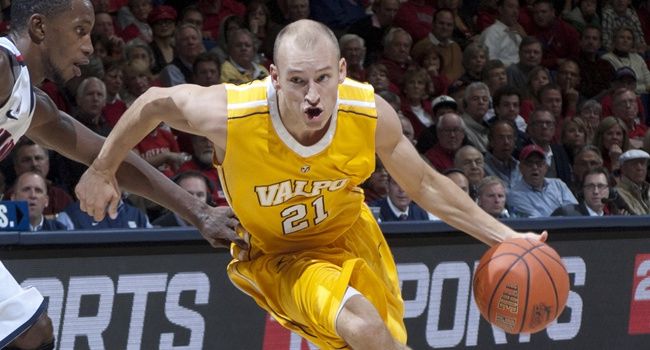 Valparaiso led for much of the first half Monday evening at #16/16 Arizona and trailed by just two at the half, but a 16-3 run to start the second half proved too much for the Crusaders to overcome, as Valpo fell by a final of 73-64 in its first game as part of the 2K Sports Classic Benefiting Coaches vs. Cancer.

“I was proud of our guys tonight, the way we fought to the end,” said Crusader head coach Bryce Drew.  “There were a couple times tonight, on the road at a top-25 team, when we could have folded, but our group finished strong.  I’m proud of that, and that will make us a better team in the long run.”

“Kevin is just a warrior,” said Drew.  “He did a great job tonight playing hard and physical against some strong Arizona players.  He pretty much single-handedly kept us in the game for a long time.”

Valpo jumped out to a quick 5-2 lead just over two minutes into Monday’s ballgame, as Broekhoff converted a fast-break layup, Van Wijk split a pair of free throws and sophomore Jay Harris (Aurora, Ill./Oswego East) hit a floater.  Arizona answered with a 14-2 run over the next eight minutes to go ahead by a 16-9 score halfway through the first half.

Still trailing by seven just over a minute later, the Crusaders utilized trips to the foul line to spark a 13-2 run that would put them ahead by four points.  Van Wijk, Harris and redshirt junior Will Bogan (Boise, Idaho/Vallivue [Ole Miss]) all hit a pair of free throws during the run, while Broekhoff knocked down a pair of 3-pointers as well.  Bogan’s efforts from the charity stripe gave Valpo a 24-20 advantage with 5:49 to play in the opening half.

The two teams would trade blows back and forth for the remainder of the half.  Back-to-back baskets by Van Wijk put the Crusaders up 30-27 with 2:27 remaining.  But Arizona scored the final five points of the opening stanza, taking a 32-30 lead into halftime.

The Crusaders struggled from the floor offensively to start the second half, taking over eight minutes to hit their first field goal, with only three free throws by Van Wijk adding to Valpo’s total on the scoreboard.  Over that same span, Arizona put 16 points on the board, going up 48-33 with 11:52 to play on a 3-pointer by Jordin Mayes.

The lead would remain in double figures most of the rest of the way, reaching as many as 20 points with 2:38 to go.  Fighting until the last buzzer, Valpo would close the contest on an 18-7 run, as Broekhoff scored 10 late points, while Bogan and Harris both hit 3-pointers as well down the stretch.

Broekhoff and Van Wijk were the only Crusaders in double figures, as Harris was Valpo’s next leading scorer with seven points.  The Crusaders struggled from behind the arc on Monday evening, hitting just 25% (5-of-20) of their efforts from downtown.

“You have to credit Arizona, because they played some very good man-to-man defense tonight,” said Drew.  “We still have a lot of players getting used to new roles, and we need those guys in new roles to step up and make baskets when we’re in stretches where we’re having trouble scoring.  Kevin did a good job doing that in the first half, and Ryan did that well in the last four minutes, but that key stretch early in the second half, we have to find someone who can make a basket when we’re struggling.”

Kyle Fogg led Arizona (1-0) with 16 points, while Nick Johnson and Jesse Perry added 14 points apiece.  Perry posted a double-double with a game-high 10 rebounds as well.  The Crusaders held the Wildcats to just 39.3% shooting from the floor in the first half, but Arizona hit 60% from the field in the second half.

Valparaiso (0-1) continues its season-opening road trip at Georgia Southern Friday evening.  The game, which can be heard live on the Valpo Sports Radio Network and online at www.valpoathletics, along with a link for live stats, is scheduled for a 6:30 p.m. CST tip-off.