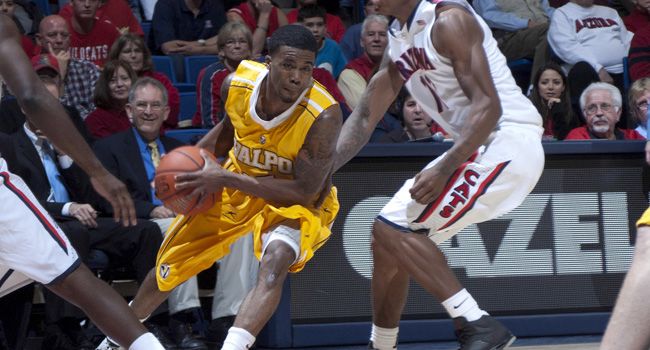 Next Up in Crusader Basketball: Valparaiso continues to rack up the miles on its season-opening two-game road trip, traveling to Statesboro, Ga. to face off against Georgia Southern Friday evening at 6:30 p.m. CST.

Last Time Out: Valparaiso led for much of the first half Monday evening at #16/16 Arizona and trailed by just two at the half, but a 16-3 run to start the second half proved too much for the Crusaders to overcome, as Valpo fell by a final of 73-64 in its first game as part of the 2K Sports Classic Benefiting Coaches vs. Cancer.  Ryan Broekhoff and Kevin Van Wijk tied for game-high honors with 18 points apiece, while Broekhoff also added nine rebounds.

Following the Crusaders: Every game this season will be available on the Valpo Sports Radio Network, with Friday's game broadcast live on WAKE (1500 AM, Valparaiso) and WEFM (95.9 FM, Michigan City).  Todd Ickow is back for his 20th season on play-by-play.  The live audio will also be available at www.valpoathletics.com, with live stats available through the official Crusader website as well.

Head Coach Bryce Drew: Bryce Drew debuted on Monday evening, as he was named the 21st head coach in the history of the Valparaiso men’s basketball program on May 17, 2011.  Just the fourth new head coach to grace the Crusader sidelines in the last 31 years, Drew had spent the last six seasons as a member of the Crusader coaching staff before earning the head position.  He famously hit the game-winning shot against Ole Miss for Valpo in the first round of the 1998 NCAA Tournament to cap an illustrious Crusader career, before going on to a seven-year professional career, six of which were spent in the NBA.

Series Notes: The Crusaders and Eagles have met just once on the hardwood in program history, but that meeting came just two years ago, also down in Statesboro as part of the Legends Classic.  In that matchup, it was Valpo which came out ahead with a 97-89 victory in a game in which Brandon Wood set a new Legends Classic scoring record, as well as a Valpo Division I record, by pouring in 39 points.  Wood connected on 13-of-18 from the floor and 10-of-12 from the free throw line for his impressive output.  Ryan Broekhoff and Cory Johnson each added 14 points in the winning effort as well.

The Road Ahead: The Crusaders open the regular season home slate Monday, Nov. 14 versus Holy Cross [Ind.] College and remain at home the next weekend to host a subregional of the 2K Sports Classic Benefiting Coaches vs. Cancer.  Valpo will host six total games over the three-day tournament, with the Crusaders set to take on Akron on Friday, IU Kokomo on Saturday and Duquesne on Sunday.

Two Road Games to Start: Playing back-to-back true road games to start the season is an unusual sight for the Crusader men’s basketball team.  Just one other time in the last 15 years has Valpo played two straight true road games to start a season.  It was the 2004-2005 season, when the Crusaders lost against Cincinnati and Central Michigan in their respective home arenas before returning home for a home opener against Charlotte.

Racking Up the Miles: While Friday marks just the Crusaders’ second game of the season, they already will have racked up plenty of travel miles in the early going.  The flight from Chicago to Tucson for the game against Arizona is 1,430 miles one way, while the flight from Chicago to Atlanta is 591 miles one way, with a 207-mile bus ride to Statesboro following the flight.

Not Many Freshmen Either: The scales are even in terms of seniors and freshmen on this year’s Crusader squad.  While Valpo has five newcomers joining the program this year, just one of them, Jamaican Vashil Fernandez, is in his first season of collegiate eligibility.

A Short Bench: Valpo enters the regular season with just nine scholarship players available to step on the court.  Bobby Capobianco must sit out the entire season after transferring to Valpo from Indiana, while Ben Boggs has to sit out at least the first semester after arriving at Valpo at the semester break last year from Virginia Tech.  Meanwhile, Vashil Fernandez remains unavailable pending a ruling from the NCAA on his status.

Van Wijk Leads the Way: Junior Kevin Van Wijk made his presence felt in the post Monday against #16/16 Arizona.  Going up against a big Wildcats front line, the Netherlands native more than held his own, ending the game tied for game-high honors with 18 points.  Van Wijk set a new career high with his 18 points, as well as eight free throw makes, and also matched his career best with seven rebounds.

Homer Drew: Fans have a new look on the sidelines this year, as Dr. Homer Drew, who spent 22 seasons as head coach of the Crusaders, retired this past May.  Drew closed his 22-year tenure with the Crusaders with 371 career victories and led Valparaiso to nine postseason appearances over his final 16 seasons.  He concluded his coaching career, which also included stints at Bethel [Ind.] and IU-South Bend, with 640 career victories over 32 seasons overall, a number which ranked 28th overall among coaches with at least ten years of NCAA Division I coaching experience.  The nine postseason appearances include seven trips to the NCAA Tournament, highlighted by the Crusaders' run to the Sweet 16 in 1998, when Valpo defeated Ole Miss and Florida State in a Cinderella journey that captivated the nation.