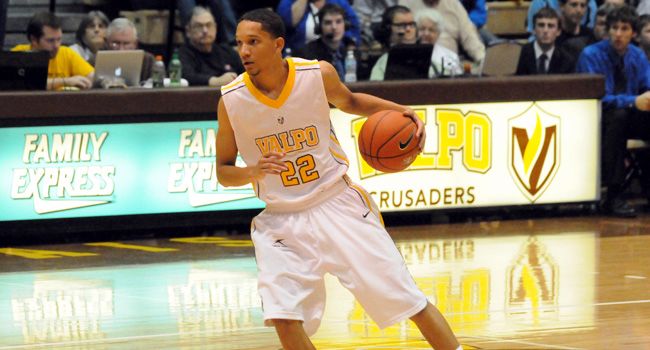 Next Up in Crusader Basketball: Valparaiso returns to the ARC for the first time in the regular season, taking on Holy Cross [Ind.] College in the home opener Monday evening.  The Crusaders split a pair of games on their season-opening road trip, most recently defeating Georgia Southern 90-81.

Last Time Out: Valparaiso gave head coach Bryce Drew his first win at the helm of the Crusaders, as Valpo led nearly start-to-finish Friday evening in a 90-81 victory over Georgia Southern in Statesboro, Ga.  With just eight scholarship players on the trip, Ryan Broekhoff carried much of the load, going for 22 points and 13 rebounds.  Will Bogan added a career-best 19 points, as five Crusaders in all ended the game scoring in double figures.

Following the Crusaders: Every game this season will be available on the Valpo Sports Radio Network, with Monday's game broadcast live on WAKE (1500 AM, Valparaiso), WEFM (95.9 FM, Michigan City) and WJOB (1230 AM, Hammond).  Todd Ickow is back for his 20th season on play-by-play, while Keaton Gillogly will join him on color commentary Monday.  Monday’s contest is also the first of the year the Crusaders will have video streamed live on the Horizon League Network.  Links to the live video and audio will be available at www.valpoathletics.com, with live stats available through the official Crusader website as well.

Head Coach Bryce Drew: Bryce Drew debuted last Monday evening, as he was named the 21st head coach in the history of the Valparaiso men’s basketball program on May 17, 2011.  Just the fourth new head coach to grace the Crusader sidelines in the last 31 years, Drew had spent the last six seasons as a member of the Crusader coaching staff before earning the head position.  He famously hit the game-winning shot against Ole Miss for Valpo in the first round of the 1998 NCAA Tournament to cap an illustrious Crusader career, before going on to a seven-year professional career, six of which were spent in the NBA.

Series Notes: Monday marks the first game between these two schools, as Valparaiso and Holy Cross have never met on the hardwood.

The Road Ahead: The Crusaders remain at home this weekend to host a subregional of the 2K Sports Classic Benefiting Coaches vs. Cancer.  Valpo will host six total games over the three-day tournament, with the Crusaders set to take on Akron on Friday, IU Kokomo on Saturday and Duquesne on Sunday.

Let’s Stay Close to Home: The antithesis of the first two games of the season will be the month ahead for the Crusaders.  Over the next 34 days, Valpo will play nine games, six of which will be played at the ARC, where the Crusaders hold a winning percentage of .811 over the last 18 years.  Then, of the three road games, only a contest at Ohio State on Nov. 25 will force Valpo to venture outside the Indiana borders.

Not Many Freshmen Either: The scales are even in terms of seniors and freshmen on this year’s Crusader squad.  While Valpo has five newcomers joining the program this year, just one of them, Jamaican Vashil Fernandez, is in his first season of collegiate eligibility.

A Short Bench...: Valpo enters the regular season with just nine scholarship players available to step on the court.  Bobby Capobianco must sit out the entire season after transferring to Valpo from Indiana, while Ben Boggs has to sit out at least the first semester after arriving at Valpo at the semester break last year from Virginia Tech.  Meanwhile, Vashil Fernandez remains unavailable pending a ruling from the NCAA on his status.

...Made Even Shorter: Valpo’s win over Georgia Southern on Friday was even more impressive considering the Crusaders traveled just eight scholarship players and nine players in all.  Sophomore Jay Harris was excused from the trip to attend his sister’s wedding.  Of the eight scholarship players, seven played at least 20 minutes, with three starters logging at least 34 minutes apiece.

Broekhoff a Second Team All-League Pick: Junior Ryan Broekhoff earned a spot on the preseason All-League Second Team after scoring 10.3 points per game and averaging a team-best 5.2 rebounds per game as a sophomore.  The Crusaders’ leading returning scorer, Broekhoff led the Horizon League last year, hitting 44.8% of his 3-point attempts.  The junior has done his best to prove his recognition was deserved in the early going, posting 18 points and nine rebounds at #16/16 Arizona before registering 22 points and 13 rebounds in the win over Georgia Southern.  Broekhoff made 13-of-16 from the foul line against the Eagles, easily setting a new career high for free throw makes.

Bogan Busts Out: Redshirt junior Will Bogan earned his first start as a Crusader in his second game at Valpo on Friday against Georgia Southern and made a big impact.  The Ole Miss transfer tallied a career-best 19 points, surpassing his 16-point effort as a freshman against Arkansas, thanks to 8-of-12 shooting from the floor.  Bogan also handed out a team-best four assists in 34 minutes of play.

Van Wijk Leads the Way: Junior Kevin Van Wijk has made his presence felt in the starting lineup in the post over Valpo’s first two games.  Last Monday against #16/16 Arizona, the Netherlands native more than held his own, ending the game tied for game-high honors with 18 points.  Van Wijk set a new career high with his 18 points, as well as eight free throw makes, and also matched his career best with seven rebounds.  Van Wijk then posted 10 points and seven rebounds in the win over Georgia Southern.

This and That: Matt Kenney went a perfect 4-of-4 from the floor in the win over the Eagles, scoring 12 points ... Richie Edwards also scored 12 points and grabbed nine rebounds in his second game as a Crusader ... Valpo dominated the glass against GSU, 37-28, and converted 16 offensive boards into 25 second-chance points.