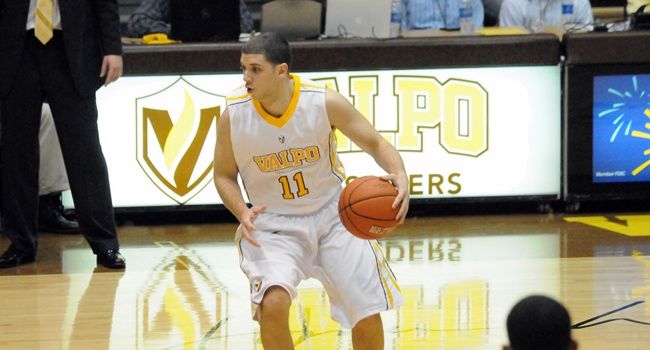 Valparaiso led start to finish Monday evening at the ARC, allowing its fewest points defensively in over 27 years in an 88-38 victory over Holy Cross [Ind.] College.

“It was a long week for us this past week, with all the travel,” said Crusader head coach Bryce Drew.  “We knew our guys were going to be fighting fatigue, so we tried to sub a lot of guys in and out of the game quickly tonight.”

Junior Richie Edwards (Lakeland, Fla./Lakeland [Hillsborough C.C.]) led all players with 25 points, hitting 8-of-12 from the floor and 7-of-9 from the free throw line.  17 of Edwards’ points came in the second half, as he shot 7-of-8 from the field in the final 20 minutes.  Junior Kevin Van Wijk (Hoofddorp, Netherlands/Katholieke Scholengemeenschap Hoofddorp) added a double-double, hitting eight of his nine shot attempts en route to 18 points and 10 rebounds in just 14 minutes, while sophomore Jay Harris (Aurora, Ill./Oswego East) posted 10 points and six assists without a turnover.

All 10 Crusaders who played on Monday evening scored at least three points, including senior walk-on Nick Shelton (Frankenmuth, Mich./Frankenmuth), who hit a pair of baskets for a career-best four points in 13 minutes of action.  Redshirt sophomore Hrvoje Vucic (Split, Croatia/Faust Vrancic) hit the boards for the Crusaders in his 19 minutes of play, grabbing a career-high six rebounds.

Valpo scored the first three points of the game on a free throw by Van Wijk and a layup by redshirt junior Erik Buggs (Memphis, Tenn./Mitchell) and would never trail the entire night.  The Crusaders extended the lead into double figures at 16-6 on a 3-point play by Van Wijk just 7:23 into the game.  A 3-pointer by Buggs with 6:39 to go in the first half extended the lead to 20 points, and Valpo never led by less than 18 the rest of the way.

Holy Cross, which was playing the game as an exhibition contest, was led by 13 points from Yama Kader.  Valpo out-scored the Saints by large margins in the paint (46-10) and in bench points (46-14).

“We ran our offense until the very end tonight,” said Drew.  “We were able to work on a lot of things tonight, and some guys who haven’t played much got to work on their conditioning in a game scenario and get game repetitions in.  We were also able to play a lot of zone, which was good, because we needed to work on our zone in game situations.”

Valparaiso (2-1) remains at the ARC to host a subregional of the 2K Sports Classic Benefiting Coaches vs. Cancer this coming weekend, Friday, Nov. 18 through Sunday, Nov. 20.  Friday’s action features Duquesne against the University of the District of Columbia at 5 p.m. before the Crusaders take on Akron at 7:30 p.m.  Live video through the Horizon League Network and live audio on the Valpo Sports Radio Network will be available for Valpo’s games this weekend, with live stats available for all six games.  Links for all will be available at www.valpoathletics.com.