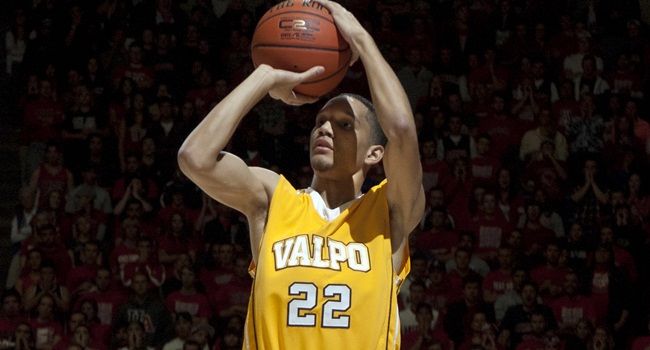 Valparaiso was within four points at halftime Friday evening at #3/3 Ohio State in Columbus, Ohio, thanks in large part to 15 first-half points from sophomore Jay Harris (Aurora, Ill./Oswego East), but the Buckeyes hit their first eight field goal attempts of the second half as the Crusaders eventually fell by a final score of 80-47.

Harris came off the bench to play 16 big first-half minutes, going 6-of-9 from the floor over the opening 20 minutes, including 3-of-6 from behind the arc.  Junior Ryan Broekhoff (Frankston, Victoria, Australia/Australian Institute of Sport) added seven points and six rebounds in the first half as well as Valpo was within 33-29 at the break.

Redshirt junior Will Bogan (Boise, Idaho/Vallivue [Ole Miss]) opened the scoring on Friday with a deep 3-pointer on Valpo’s first possession,  but Ohio State would score the next seven points over a two-minute span to claim a 7-3 lead.  For much of the first half, the Buckeyes’ lead would sit between one and four points, as the Crusaders stayed within striking distance.

Ohio State extended the lead to six points at 18-12 with 11:12 to go in the half, but Harris converted a layup from redshirt junior Erik Buggs (Memphis, Tenn./Mitchell) and then drilled a 3-pointer two possessions later to bring Valpo back within one point.  The Buckeyes would go on their first extended run of the game at that point, outscoring the Crusaders 12-2 over the next five minutes to claim a 30-19 edge with 5:08 to go in the half.

But Valpo chipped away at the advantage heading into the break to get back within four points, holding Ohio State to just 1-of-8 shooting from the floor and 1-of-4 from the foul line over the half’s last five minutes.  Broekhoff ended the Ohio State run with a 3-pointer off a feed from junior Matt Kenney (Mooresville, Ind./Mooresville) , while Buggs also converted a runner in the lane during the half-ending spurt.

Broekhoff hit Harris over the top of the OSU press for an easy layup with 1:51 to go in the half, and then the sophomore capped his 15-point half with a triple with 43 seconds remaining.  In the end, Valpo closed the first 20 minutes on a 10-3 spurt, moving to within 33-29 at the break.

“I was very pleased with our effort in the first half,” said Crusader head coach Bryce Drew.  “I thought our guys did a good job offensively executing and setting a good tempo, and Jay was really a spark for us off the bench, making some tough shots.”

But the second half would be a different story for the Crusaders, as Valpo came up empty on its first six offensive possessions, while the Buckeyes started the second half with eight straight baskets.  Aaron Craft’s triple with 14:12 to play gave OSU a 51-31 advantage, and while the Crusaders would get back-to-back 3-pointers from Harris and junior Richie Edwards (Lakeland, Fla./Lakeland [Hillsborough C.C.]) to close to within 15 points with 11:31 remaining, they would get no closer.

“I thought that the key to the second half was the first four minutes,” said Drew.  “[Ohio State] came out and went on that big run, and we were never able to recover from it.”

Harris ended the night with a team-high 18 points, just two off of his career high.  But the sophomore was the only Crusader in double figures at the end of the game, as Broekhoff and redshirt sophomore Hrvoje Vucic (Split, Croatia/Faust Vrancic) were next on the scoring chart with seven points apiece.  Broekhoff paced the Crusaders with 11 rebounds and also had a pair of blocked shots.  Valpo shot 12-of-25 (48.0%) from the floor in the first half, including 5-of-12 from behind the arc, but was just 7-of-31 (22.6%) from the field in the final 20 minutes.

Valparaiso (5-2) returns to the court to open Horizon League play next Saturday, Dec. 3 as the Crusaders travel to Hinkle Fieldhouse to take on Butler.  Tipoff is slated for 1 p.m. CST, and all the action can be heard live on the Valpo Sports Radio Network and seen online via the Horizon League Network.  Links for the live audio and video webcasts, as well as live stats, will also be available at www.valpoathletics.com.