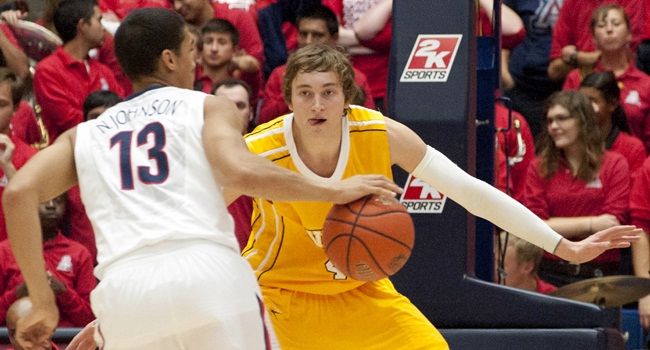 Valparaiso erased a 14-point first-half deficit to take a one-point lead with 14 minutes to play Wednesday evening in Fort Wayne, Ind., but IPFW scored the next five points to reclaim the lead for good and rode 60.8% shooting from the floor as the Crusaders fell by a final of 85-76.

“I thought IPFW did a great job shooting the ball tonight,” said Crusader head coach Bryce Drew.  “They really did a good job executing their offense and getting good shots.  Defensively, they did a good job rotating and made us make some tough shots.”

Trailing by seven at the half, it was a nine-point deficit that the Crusaders faced with under 16 minutes to play before Valpo went on a big run.  Kevin Van Wijk (Hoofddorp, Netherlands/Katholieke Scholengemeenschap Hoofddorp) started the spurt with a pair of free throws, followed by a Will Bogan (Boise, Idaho/Vallivue [Ole Miss]) steal which he got ahead to Ryan Broekhoff (Frankston, Victoria, Australia/Australian Institute of Sport) for a fast-break dunk to cut the lead quickly to 55-50 with 15:29 to play.

Two trips later, Bogan got a defensive rebound and then converted on the other end as well, getting a feed from Richie Edwards (Lakeland, Fla./Lakeland [Hillsborough C.C.]) for a 3-pointer to make it a two-point game.  Then after another turnover by the Mastodons, Broekhoff knocked down a triple off a pass from Tommy Kurth (Osceola, Ind./Penn) to put Valpo ahead 56-55 with 13:59 remaining.

But John Peckinpaugh would score the game’s next five points for IPFW to give the Mastodons a four-point edge, a lead which they would not relinquish.  But the Crusaders also did not let IPFW run away with the game, trading baskets for much of the next eight minutes to keep the deficit between one and four points.  Heading into the game’s final four minutes, Erik Buggs (Memphis, Tenn./Mitchell) converted a layup to get Valpo within 73-72, but IPFW answered with a layup by Trey McCorkle to regain a three-point lead.

“They made a run after we took the lead, and then we couldn’t string together two or three stops in a row to try to take the lead back,” said Drew.

The Valpo defense would get stops on each of IPFW’s next three possessions, forcing a pair of turnovers and two missed shots to give itself a chance to cut into the three-point lead or even take the advantage.  But a turnover, two missed front ends of one-and-ones and a missed 3-pointer plagued the Crusaders over that stretch, and a layup by Jay Harris (Aurora, Ill./Oswego East) with 2:09 to play just cut the lead to one point again at 75-74.

IPFW’s Frank Gaines delivered a 3-pointer on the Mastodons on their next trip, but Matt Kenney answered with another inside basket to make it 78-76 IPFW with 1:35 remaining.  A three-point play by Gaines next time down would be the final blow, however, as the Crusaders missed another front end of a one-and-one with 1:09 to play trailing by five points and IPFW went 4-for-5 from the foul line in the final minute.

A fast-break layup by Kenney gave Valpo a 2-1 lead just 38 seconds into the game, but that would be the Crusaders’ only lead until the second half.  IPFW scored the next nine points and eventually led by double figures at 14-4 just 5:10 into the ballgame.  Back-to-back Broekhoff triples cut the deficit to four points less than three minutes later, but IPFW responded and led by as many as 14 points in the first half at 28-14 with 8:17 to go in the opening period.  Valpo would get as close as four in the waning minutes before IPFW eventually took a 44-37 lead into the break.

“I think IPFW came out excited to play tonight,” said Drew.  “We didn’t make it as tough on them as we needed to early, and I think they built confidence from their quick start.”

Broekhoff paced four Valpo players in double figures with 20 points, including four 3-pointers.  Bogan and Van Wijk added 15 points each, the latter also grabbing a game-best nine rebounds, while Kenney added 13 points.  The Crusaders shot better than 50% from the floor (29-of-57), but hit just 10-of-19 from the foul line and also committed 18 turnovers.

Gaines led all players with 24 points for IPFW (4-3), as the Mastodons also placed four players in double digits.  Trey McCorkle added 16 points, while Jonny Marlin scored 10 points and handed out a game-high seven assists.  IPFW shot at least 60% in each half, finishing the game 31-of-51 from the floor, including 7-of-12 from behind the arc.  The Mastodons also connected on 80% (16-of-20) from the foul line.

Valparaiso (6-3) returns home for each of the next two Saturdays, starting with a game this Saturday, Dec. 10 against Bowling Green at 7:05 p.m.  As always, all of the action can be heard live on the Valpo Sports Radio Network and seen online on the Horizon League Network.  Links to both the audio and video webcasts, as well as live stats and the Valpo Gameday page, will be available at www.valpoathletics.com.