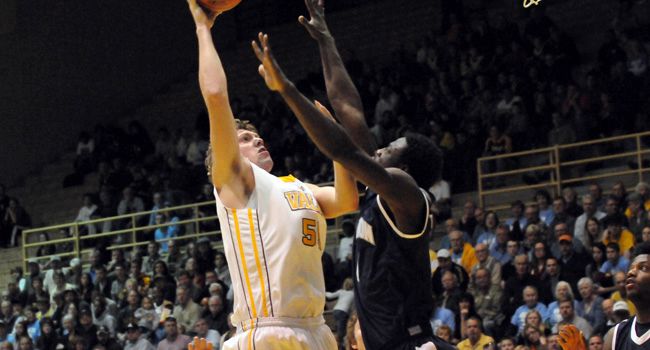 Next Up in Crusader Basketball: Valparaiso returns home to the ARC for the first time in three weeks Saturday evening as the Crusaders host Bowling Green State University.  Valpo is looking to rebound after suffering a road defeat at IPFW Wednesday night.

Last Time Out: Valparaiso erased a 14-point first-half deficit to take a one-point lead with 14 minutes to play Wednesday evening in Fort Wayne, Ind., but IPFW scored the next five points to reclaim the lead for good and rode 60.8% shooting from the floor as the Crusaders fell by a final of 85-76.  Four Valpo players finished the night in double figures in the scoring column, paced by 20 points from junior Ryan Broekhoff.

Following the Crusaders: Every game this season will be available on the Valpo Sports Radio Network, with Saturday's game broadcast live on WAKE (1500 AM, Valparaiso) and WEFM (95.9 FM, Michigan City).  Todd Ickow is back for his 20th season on play-by-play, while Keaton Gillogly will join him on color commentary Saturday.  As always with every home game, there will be a live free video webcast through the Horizon League Network as well.  Links to the live audio and video webcasts, as well as a link to live statistics and the Valpo Gameday page, will also be available at www.valpoathletics.com.

Series Notes: A series that dates back over 65 years, Valparaiso has taken on Bowling Green just eight times on the hardwood over that span.  It has been the Falcons who have won all eight meetings, however, in four different locales.  The last matchup was arranged out of the BracketBuster pool of teams on Feb. 20, 2010 in Bowling Green, a game that the Falcons won 87-70.  BGSU placed all five starters in double figures, led by 20 points from Dee Brown.  Brandon McPherson led the way for Valpo with 16 points and seven assists.

The Road Ahead: The Crusaders stay at home for the final exam period next week, capping the week with a game against former Mid-Con rival Oakland on Saturday, Dec. 17.  Valpo then closes out the bulk of non-league play with a pair of road games before Christmas, taking on Northern Illinois on Dec. 20 and IUPUI at Conseco Fieldhouse on Dec. 23.

Scouting Bowling Green: The Falcons enter Saturday’s game at 5-3 on the season after an 87-44 victory over Malone University (D-II) on Wednesday evening.  However, BGSU has dropped both its road games, losing at Georgia and Western Kentucky.  Bowling Green has defeated the only Horizon League team it has faced, beating Detroit 67-61.  The Falcons score just 66 points per game, but give up only 61 a contest.  Scott Thomas leads the team averaging 11.4 points and 6.5 rebounds per game, while A’uston Calhoun posts 10.9 points and 6.0 rebounds per game.

Defense Wanted: The Crusaders shot better than 50% from the floor Wednesday at IPFW, normally a good recipe for a win, especially considering Valpo entered the night allowing opponents to hit just 39.9% of their field goal attempts.  But unfortunately for the Crusaders, they gave up 85 points, as the Mastodons shot 60.8% from the floor, including 58.3% from behind the 3-point line.  The field goal percentage was the highest by a Valpo opponent since Cleveland State shot 61.0% on Feb. 26, 2009, while the 3-point percentage was the highest given up by the Crusaders since UIC connected on 63.2% from behind the arc on Feb. 15, 2009.

BracketBuster: Saturday’s game is the back end of a home-and-home series arranged through the annual BracketBuster event’s pool of mid-major teams.  The Crusaders played at Bowling Green two years ago.  Since the event’s inception, Valpo is 2-3 on the back end of the series, defeating Niagara and Western Michigan while losing to Butler, Akron and Miami.

Working Extra Time: For the first time this season, Valparaiso required overtime, as the Crusaders were tied at 64 with Butler at the end of regulation last Saturday before going on to the 77-71 victory.  This comes one season after the Crusaders played five overtime games, four of which were league contests (3-1 record).  Ironically, Valpo’s Horizon League opener last season also went overtime, as the Crusaders downed UIC on the road in OT, 68-66.

Big Win at Hinkle: Not only will Valpo be 1-0 in league play for a four-week stretch thanks to the win over Butler, it also signified to the Crusaders that they could defeat the Bulldogs in Hinkle Fieldhouse.  The win over Butler on its home court was Valpo’s first since joining the Horizon League and the first by the Crusaders since Feb. 3, 1988.  The Crusaders did previously win a neutral-site game over Wright State in the HL Championship quarterfinal in 2008.  Valpo now owns wins in eight of the nine other HL venues since joining the league, remaining winless only at the Wolstein Center (Cleveland State).

Tournament Success: The Crusaders won the Valparaiso Subregional of the 2K Sports Classic last weekend, continuing their success in in-season tournaments over the last couple years.  Last season saw Valpo take the Upper Division Championship of the Las Vegas Invitational by defeating Northern Colorado and Texas A&M-CC, as well as the Lou Henson Award Tournament with wins over Eastern Michigan and Oakland.

Home Court Advantage: With 15 regular season home games slated for the ARC this year, Valparaiso has plenty of opportunities to utilize its home court advantage.  After the sweep of their first four home games, the Crusaders own a 250-110 (.694) all-time record at the ARC, including a 197-45 (.814) mark over the last 18-plus years at home.  The Crusaders have also finished above .500 on their home court in each of the last 18 years.

A Short Bench: Valpo currently has just nine scholarship players available to step on the court.  Bobby Capobianco must sit out the entire season after transferring to Valpo from Indiana, while Ben Boggs has to sit out at least the first semester after arriving at Valpo at the semester break last year from Virginia Tech.  Meanwhile, Vashil Fernandez remains unavailable pending a ruling from the NCAA on his status.

Who Needs 3’s?: The Crusaders proved they didn’t need the 3-pointer to win their game Nov. 18 against Akron.  Valpo went 0-for-14 from behind the arc, but went 19-for-32 inside the arc and 24-for-38 from the foul line in the victory.  In fact, all 19 of Valpo’s baskets against the Zips came in the paint.

A Double-Double Machine: Junior Ryan Broekhoff has proven to be a force not only in the scoring column, but also on the glass in the early going this season.  Through nine games, the Australian native has picked up four double-doubles, including a 13-point, 12-rebound effort last Saturday in the overtime win at Butler.  Following his 20-point effort at IPFW on Wednesday, Broekhoff leads the Crusaders with 14.8 ppg, good for third in the league.  But his work on the boards has been perhaps most impressive, as he paces the Horizon League with 9.0 rebounds per game, one of just two players averaging better than 7.3 rpg.  In fact, Broekhoff averages more defensive rebounds (7.0/game) than all but three other league players average in total rebounds.

Fighting Down Low: Junior Kevin Van Wijk continues to rank among the Horizon League leaders in numerous categories.  Van Wijk, who posted 15 points last time out against IPFW, is fifth in the league in scoring (14.3 ppg) and third in rebounding (7.3 rpg).  Perhaps most impressive has been his accuracy shooting the ball, as the native of the Netherlands has connected on 39 of his 60 field goal attempts, good for a league-best .650 shooting percentage.  He also is one of the best players nationally at getting to the free throw line, as Van Wijk has taken nearly as many free throws (57) as field goals (60), giving him a free throw rate of 95.0, which ranks fifth nationally.

Bogan Delivers From Downtown: Redshirt junior Will Bogan is starting to heat up from behind the arc for the Crusaders.  Bogan has connected on 3-of-7 attempts from downtown in each of Valpo’s last two games (Butler/IPFW), giving him three games with at least three triples made this season.  The Ole Miss transfer currently leads the Crusaders, connecting on 36.4% of his 3-point tries this year, and is just outside the league’s top-five in 3-pointers made per game.