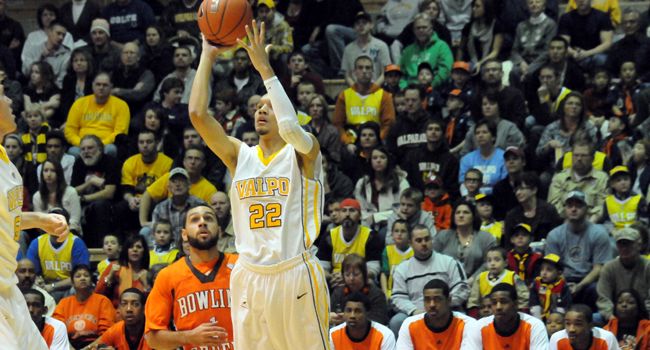 In a game which was within one possession for virtually the last 10 minutes of play, it was Valparaiso which came up with the big points down the stretch, as the Crusaders went 10-for-12 from the free throw line over the game’s final two minutes to earn an 82-79 victory over Bowling Green State University Saturday evening at the ARC.

“I thought our crowd was great tonight and really gave us a lot of energy when we needed it down the stretch,” said Crusader head coach Bryce Drew.  “Our student section was wonderful, and we definitely fed off their energy.  Bowling Green is a very good team, and I’m very proud of the way we played against them tonight.”

A Scott Thomas 3-pointer with 9:40 to play brought Bowling Green to within one point at 52-51, starting a stretch where neither team led by more than two points until the final minute.  Over the next five-plus minutes, it would be mainly the Falcons who led, but the Crusaders forced ties on five occasions and actually regained the lead once, as a 3-pointer by Jay Harris (Aurora, Ill./Oswego East) put Valpo ahead 64-63 with 5:07 to play.

The Falcons regained the lead on their next trip on a putback basket, but two trips later Kevin Van Wijk (Hoofddorp, Netherlands/Katholieke Scholengemeenschap Hoofddorp) hit a pair of free throws to tie the game at 66-all and set up the final stretch.  Jordon Crawford and Matt Kenney (Mooresville, Ind./Mooresville) did battle over the next two minutes, as Crawford hit a free throw to give BGSU the one-point lead, which Kenney answered with a tough driving layup.  Crawford knocked down a deep jumper on the Falcons’ next trip, but Kenney responded with a deep jumper of his own with his foot on the 3-point line, putting Valpo ahead 70-69 with 2:39 to go.

Two possessions later, the Falcons regained the lead on a jumper in the paint, but then came the game’s critical point.  Van Wijk was fouled by Torian Oglesby while shooting down low, and Oglesby then was issued a technical foul as well following the whistle.  Given four attempts at the foul line, the Crusaders knocked down three, as Harris split two and Van Wijk connected on both of his to put Valpo ahead 73-71 with 1:44 left.

The teams traded splits at the free throw line on their respective next possessions as the Crusaders maintained a two-point lead.  Crawford was sent to the line with 40 seconds to play for the Falcons, but missed both his attempts.  Van Wijk got up to grab the rebound and cleared it to Harris, who was fouled with 35 seconds to go.  The sophomore coolly drained both the freebies to push the lead to four points, but BGSU answered with a pair of free throws just 10 seconds later to cut the edge to 76-74.

Following the second make, the Falcons were pressing, and the Crusaders took full advantage.  Ryan Broekhoff (Frankston, Victoria, Australia/Australian Institute of Sport) delivered a perfect pass over the top of the press to Kenney, who went up with Crawford attempting to chase him down from behind and slammed it home with two hands over the Falcons’ point guard to make it 78-74 Valpo.  Following a BGSU miss, Broekhoff hit a pair of free throws to push the lead to six points, and while Crawford drilled a deep 3-pointer with just over six seconds to play, Will Bogan (Boise, Idaho/Vallivue [Ole Miss]) iced the game with a pair of free throws in the final ticks.

Broekhoff was the story of the first half for the Crusaders, hitting 6-of-8 from the floor, including 3-of-5 from behind the 3-point line, for 16 points in the opening 20 minutes.  Bowling Green led by as many as six in the early going, but a personal 10-1 run for Broekhoff over a four-minute stretch spanning the midway point of the half gave Valpo a four-point lead.  Then, leading by just four with less than three minutes to go in the half, Broekhoff started an 8-2 spurt which pushed the lead into double figures with a 3-pointer and capped it with an old-fashioned three-point play.  The Crusaders would eventually take a 37-29 lead into the locker room.

Valpo scored six of the first eight points in the second half, including a pair of inside baskets from Van Wijk and a fast-break layup from Kenney, to quickly push its advantage to 43-31 with 18:12 to play.  The lead was still 11 points following a triple by Harris with 13:02 to go, but Bowling Green would score nine points in its next four possessions to quickly slice the lead to just two points.  A layup by Hrvoje Vucic (Split, Croatia/Faust Vrancic) briefly made it a two-possession game again, but then the aforementioned 3-pointer by Thomas set up the tense final 10 minutes.

Broekhoff and Harris would tie for team-high honors with 20 points apiece, the latter matching his career high in the process.  Broekhoff, who did not attempt a field goal in the second half, also paced all players with nine rebounds, matching his season average, and came up with a season-best four steals.  Meanwhile, Harris knocked down three 3-pointers and was 7-of-8 from the foul line, while also hitting the boards, where he came up with five rebounds.

“Ryan had another sensational game,” said Drew.  “The 20 points were nice, but I loved the four steals.  He got his hands on a lot of balls and had a number of deflections on the defensive end which really helped turned the tide when we needed stops.  Matt did a great job chasing Thomas, Bowling Green’s leading scorer, all over the court defensively and had enough energy left to get in the lane and finish as well.”

Valparaiso (7-3) takes a week off for final exams before returning to the court at the ARC next Saturday to face former Mid-Con rival Oakland.  Tipoff is slated for 7:05 p.m., and as always, all the action can be heard live on the Valpo Sports Radio Network and seen online on the Horizon League Network.  Links to both the audio and video webcasts, as well as live stats and the Valpo Gameday page, will be available at www.valpoathletics.com.