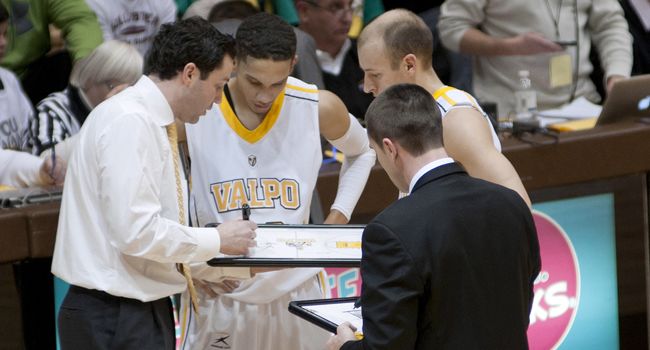 Bryce Drew and the Crusaders look to improve to 6-0 at home this year. (Di Geng)
Oakland at Valparaiso | December 17, 2011
Related Links
Related Links

Next Up in Crusader Basketball: Valparaiso looks to keep its perfect home record this season intact on Saturday night as the Crusaders host former Mid-Con foe Oakland at the ARC.  Valpo has started the season with five straight victories at home.

Last Time Out: In a game which was within one possession for virtually the last 10 minutes of play, it was Valparaiso which came up with the big points down the stretch, as the Crusaders went 10-for-12 from the free throw line over the game’s final two minutes to earn an 82-79 victory over Bowling Green State University Saturday evening at the ARC.  Ryan Broekhoff and Jay Harris paced the Crusaders with 20 points apiece, the latter matching his career-best effort in the category.

Following the Crusaders: Every game this season will be available on the Valpo Sports Radio Network, with Saturday's game broadcast live on WAKE (1500 AM, Valparaiso) and WEFM (95.9 FM, Michigan City).  Todd Ickow is back for his 20th season on play-by-play, while Keaton Gillogly will join him on color commentary Saturday.  As always with every home game, there will be a live free video webcast through the Horizon League Network as well.  Links to the live audio and video webcasts, as well as a link to live statistics and the Valpo Gameday page, will also be available at www.valpoathletics.com.

Series Notes: Valparaiso had dominated the all-time series against the Grizzlies, winning the first 16 matchups, but Oakland took the last three meetings while the Crusaders were in the Mid-Con.  Last season, in their first meeting as non-league foes, Valpo captured an epic 103-102 victory in Rochester, Mich. to take a 17-3 series lead.  The matchup spawned an entire page of game notes for the rest of the year, some of which are recapped later in these notes.

The Road Ahead: Valpo closes out the bulk of non-league play with a pair of road games before Christmas, taking on Northern Illinois on Dec. 20 and IUPUI at Conseco Fieldhouse on Dec. 23.  Following the holiday, the Crusaders return home to the ARC to start up the meat of the Horizon League slate with games against Milwaukee (Dec. 29) and Green Bay (Dec. 31).

Scouting Oakland: The Golden Grizzlies enter Saturday’s game at 7-4 overall and have gotten off to a 2-0 start in Summit League play.  Three of Oakland’s four losses have come against BCS conference teams (Alabama, Arkansas, Michigan), while it also beat Tennessee at home, 89-81.  Senior Reggie Hamilton leads a high-octane Grizzlies offense that averages 80 points per game, as the Chicago native has scored 20.3 ppg through Oakland’s first 11 games.  Sophomore Travis Bader knocks down nearly three 3-pointers per game while averaging 13.7 ppg, and freshman Corey Petros is averaging a double-double (12.1 ppg, 10.6 rpg).

Facing All Three Drews: Oakland head coach Greg Kampe will earn the distinction Saturday of being the first head coach to face all three coaching members of the Drew family.  The longtime head coach of the Golden Grizzlies, Kampe officially coached against Homer Drew 18 times and Scott Drew twice over the last 12 years, although Scott also coached the Crusaders against Oakland in a game in 2001 where Homer was ill.

Proficiency Inside the Arc: Valparaiso’s success shooting from 2-point range has carried over into the 2011-2012 season.  Last season, the Crusaders finished the year hitting 55.3% of their 2-point attempts, good for third nationally.  So far this year, Valpo has connected at an even better clip from inside, knocking down 59.8% of its tries from inside the arc, and leads the nation in the category.  In fact, of Valpo’s nine scholarship players, seven are hitting at least half of their 2-point attempts.  The Crusaders had one of their best efforts of the season from inside in last Saturday’s win over Bowling Green, hitting 19-of-25 (76%) from inside the arc.

Nice Start to the Season: Valpo’s win over Bowling Green last Saturday pushed the Crusaders’ record to 7-3.  Seven wins in their first 10 games is something the Crusaders have accomplished only twice in the last decade: 2007-2008, when the team started 9-1 and would go on to earn a berth in the CBI; and 2001-2002, when the team started 7-3 en route to an NCAA Tournament appearance.  This year’s start is more impressive considering Valpo’s strength of schedule through 10 games ranks 30th nationally according to the Pomeroy rankings and 79th according to the Sagarin ratings.

Working Extra Time: For the first time this season, Valparaiso required overtime, as the Crusaders were tied at 64 with Butler at the end of regulation in their Horizon League opener before going on to the 77-71 victory.  This comes one season after the Crusaders played five overtime games, four of which were league contests (3-1 record).  Ironically, Valpo’s Horizon League opener last season also went overtime, as the Crusaders downed UIC on the road in OT, 68-66.

Tournament Success: The Crusaders won the Valparaiso Subregional of the 2K Sports Classic last weekend, continuing their success in in-season tournaments over the last couple years.  Last season saw Valpo take the Upper Division Championship of the Las Vegas Invitational by defeating Northern Colorado and Texas A&M-CC, as well as the Lou Henson Award Tournament with wins over Eastern Michigan and Oakland.

Last Year’s Oakland Game: The Crusaders’ 103-102 win over Oakland last year on Dec. 21 was full of noteworthy information.  Both teams held double-figure leads at some point in the game before it came down to the wire.  It was the first time Valpo had both scored and allowed 100 points in a regulation game in over 14 years.  The two teams combined for more points than all five NBA games that ended in regulation that same night.  Brandon Wood (35) and Cory Johnson (33) became the first pair of Crusader teammates to both score 30+ points in at least 20 years.

Home Court Advantage: With 15 regular season home games slated for the ARC this year, Valparaiso has plenty of opportunities to utilize its home court advantage.  After the sweep of their first five home games, the Crusaders own a 251-110 (.695) all-time record at the ARC, including a 198-45 (.815) mark over the last 18-plus years at home.  The Crusaders have also finished above .500 on their home court in each of the last 18 years.

A Short Bench: Valpo has started the season 7-3 despite having just nine scholarship players available to step on the court.  Bobby Capobianco must sit out the entire season after transferring to Valpo from Indiana, while Ben Boggs has had to sit out at least the first semester after arriving at Valpo at the semester break last year from Virginia Tech.  Meanwhile, Vashil Fernandez remains unavailable pending a ruling from the NCAA on his status.

Who Needs 3’s?: The Crusaders proved they didn’t need the 3-pointer to win their game Nov. 18 against Akron.  Valpo went 0-for-14 from behind the arc, but went 19-for-32 inside the arc and 24-for-38 from the foul line in the victory.  In fact, all 19 of Valpo’s baskets against the Zips came in the paint.

Doing a Bit of Everything: Junior Ryan Broekhoff is the type of player who can do anything the Crusaders need him to do on the court, but he took it to the extreme against Bowling Green last Saturday.  The Australian tied or outright led Valpo in all five major statistical categories (20 pts., 9 reb., 3 ast., 1 blk., 4 stl.), the first Crusader to pull that off since Urule Igbavboa on Feb. 15, 2009 and just the second in the last decade-plus.  Broekhoff enters Saturday among the Horizon League’s top-10 in eight different statistical categories, among them leading the league in rebounding (9.0 rpg) and ranking third in the league in scoring (15.3 ppg).

Harris Steps Up: Sophomore Jay Harris had to fill the point guard role after Erik Buggs was sidelined with an injury late in the first half against Bowling Green, and Harris was up to the task, playing the game’s final 25 minutes en route to a career-high 35 minutes of action.  Harris matched his career best with 20 points, hitting a trio of 3-pointers and also connecting on 7-of-8 from the foul line, while also contributing five rebounds and three assists.  On the season, Harris ranks 12th in the Horizon League in scoring (12.0 ppg), 10th in assists (2.8 apg) and second in free throw percentage (.848).

Fighting Down Low: Junior Kevin Van Wijk continues to rank among the Horizon League leaders in numerous categories.  Van Wijk, who posted 16 points last time out against Bowling Green, is sixth in the league in scoring (14.4 ppg) and tied for fifth in rebounding (6.8 rpg).  Perhaps most impressive has been his accuracy shooting the ball, as the native of the Netherlands has connected on 41 of his 64 field goal attempts, good for a league-best .641 shooting percentage.  He also is currently the best player nationally at getting to the free throw line, as Van Wijk has attempeted seven more free throws (71) than field goals (64), giving him a free throw rate of 110.9 to lead the nation.