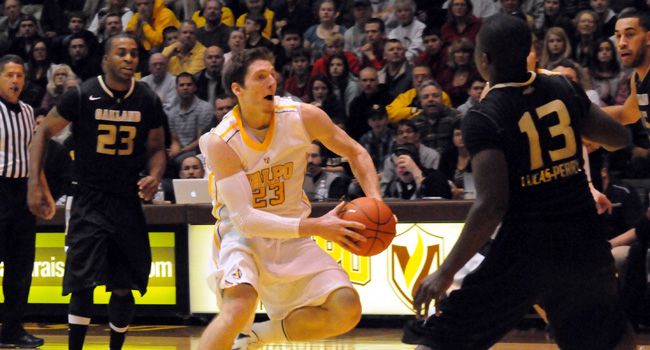 Oakland’s Reggie Hamilton hit a buzzer-beating shot from the top of the key as Valparaiso fell to the Golden Grizzlies at the ARC Saturday evening, 82-80.  The loss was the first for the Crusaders this season at home in six games.

The jumper at the buzzer capped a 41-point performance from Hamilton.  Despite Hamilton’s scoring exploits, however, the Crusaders had a chance to run the clock down for the final shot, as Will Bogan (Boise, Idaho/Vallivue [Ole Miss]) created a tie-up with the arrow in Valpo’s favor with 32 seconds to play.  Valpo got called for a travel with 4.6 seconds remaining, however, turning possession back over to Oakland.  Following a timeout, Hamilton caught the inbounds pass and took it the length of the court himself, pulling up from 16 feet over a Crusader defender to win the game for the Grizzlies.

“You’ve got to give Oakland a lot of credit tonight,” said Crusader head coach Bryce Drew.  “They came out and made a lot of tough shots, a lot of tough plays.  Hamilton is just an excellent player, and he made some big plays down the stretch for them.”

The final few minutes of the game were played mostly within one possession after both squads put together huge runs in the second half.  Coming out of the locker room ahead by just two points, Valpo out-scored Oakland 23-8 over the first 6:30 of the second half, thanks in large part to a barrage of 3-pointers.

Ryan Broekhoff (Frankston, Victoria, Australia/Australian Institute of Sport) nailed three triples during the run, while Bogan and Richie Edwards (Lakeland, Fla./Lakeland [Hillsborough C.C.]) each hit a 3-pointer as well.  Kevin Van Wijk (Hoofddorp, Netherlands/Katholieke Scholengemeenschap Hoofddorp) had three inside buckets as well in the opening stretch, which concluded with Broekhoff’s third triple of the half putting Valpo ahead 60-43 with 13:39 to play.

But Oakland countered right away, needing just two minutes to slice the lead down to just three points at 61-58.  Hamilton had 10 points during the Grizzlies’ 15-1 run.  Despite the onslaught, Valpo would hold on to the lead, not letting Oakland tie the score as the Crusaders’ advantage fluctuated between one and three points for the next five-plus minutes.

“We had a really good rhythm going to start the second half,” said Drew.  “We were able to get good ball movement, got the ball in the lane and that created some open shots.    But then, Erik got into foul trouble and Jay had basically one good arm the second half, and I think that made a difference.  If either of them could have been out there longer, it might have been a different story.”

A pair of free throws by Broekhoff pushed the Valpo edge to 71-66 with 5:53 remaining, but Oakland came back with seven of the next eight points, as a triple by Travis Bader gave the Grizzlies their first lead of the second half with 4:25 to play.  Van Wijk came right back with an inside basket to re-claim the lead for Valpo, and after Oakland split a pair of free throws, Ben Boggs (Roanoke, Va./Hidden Valley [Virginia Tech]) knocked down a 3-pointer to give Valpo a 77-74 lead at the 3:29 mark.

But Hamilton came right back with his fifth 3-pointer of the night to tie the game just 10 seconds later.  Van Wijk hit two big free throws on Valpo’s next trip, but the Crusaders then turned the ball over on their next three possessions, giving Oakland the chance to take an 80-79 advantage.  Boggs split two free throws with 1:29 to go to tie the game at 80, and the Crusaders forced a miss by Hamilton on Oakland’s offensive possession.  A turnover with 41 seconds to go gave the ball back to Oakland, but Bogan forced the tie-up just nine seconds later to set up the final sequence.

The Crusaders led by two (37-35) at halftime after a back-and-forth first half.  Valpo scored the game’s first seven points and still led by five at 12-7 following a 3-pointer by Boggs, making his Crusader debut, seven minutes into the game.  Oakland came back with 18 of the next 26 points over a six-minute stretch, claiming a 25-20 lead.  The Grizzlies’ lead maintained at five as late as 3:02 to go in the half, but a 3-pointer and an old-fashioned 3-point play by Jay Harris (Aurora, Ill./Oswego East) were part of a 9-0 run to put Valpo back on top heading into the break.

Van Wijk paced the Crusaders Saturday with 22 points, hitting 8-of-9 from the field.  Broekhoff registered yet another double-double, tallying 18 points and a game-high 12 rebounds, while Bogan hit three triples en route to 11 points.  Matt Kenney (Mooresville, Ind./Mooresville) filled up the stat line, posting seven points, eight rebounds and a game-high seven assists.  Valpo shot 50.9% from the floor for the game, including a season-best 11 3-pointers, and out-rebounded the Grizzlies, 36-31.

Hamilton picked up his 41 points for Oakland (8-4) on 14-of-24 shooting from the floor, including 5-of-10 from behind the arc, and 8-of-11 from the foul line.  Drew Valentine added 19 points and nine rebounds in the victory for the Grizzlies, while Laval Lucas-Perry chipped in 12 points off the bench.

Valparaiso (7-4) has a quick turnaround, getting right back to action on Tuesday evening as the Crusaders make the trip to Northern Illinois.  Tipoff is slated for 7:05 p.m., and as always, can be heard live on the Valpo Sports Radio Network.  Links to the audio webcast, as well as live stats, will be available at www.valpoathletics.com.