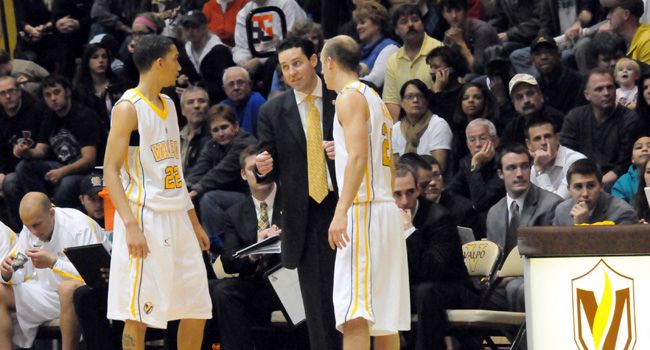 Next Up in Crusader Basketball: The Valparaiso men’s basketball team concludes the 2011 calendar year at the ARC with a Saturday afternoon matinee, as the Crusaders host Green Bay on New Year’s Eve at 4:05 p.m.  Valpo is looking to snap a two-game losing streak heading into the new year.

Last Time Out: After leading for most of the game, Valparaiso reclaimed a one-point advantage with 1:25 to go, only to see Milwaukee’s Kaylon Williams rattle home a 3-pointer on the next trip to give the Panthers the lead for good, as the Crusaders fell Thursday evening, 57-55, at the Athletics-Recreation Center.  Ryan Broekhoff paced all players on Thursday with 18 points and 12 rebounds, his seventh double-double of the year.  Kevin Van Wijk added 15 points and three steals, while Erik Buggs reached double figures for just the second time this season with 12 points to go with four assists.

Following the Crusaders: Every game this season will be available on the Valpo Sports Radio Network, with Saturday's game broadcast live on WAKE (1500 AM, Valparaiso), WEFM (95.9 FM, Michigan City) and WJOB (1230 AM, Hammond).  Todd Ickow is back for his 20th season on play-by-play, while Keaton Gillogly will join him on color commentary Saturday.  As always with every home game, there will be a live free video webcast through the Horizon League Network as well.  Links to the live audio and video webcasts, as well as a link to live statistics and the Valpo Gameday page, will also be available at www.valpoathletics.com.

Series Notes: Green Bay leads the all-time series by a 25-15 count, but Valpo holds a slight 10-9 edge in games played on the Crusaders’ home court.  The Phoenix won both meetings a year ago between the two teams, including a heartbreaking 81-80 overtime loss on Feb. 21 in Green Bay.  Brandon Wood led all players with 24 points, while Ryan Broekhoff added 20 points as well.

The Road Ahead: Valpo hits the road for six of its next eight games, starting with an ESPN3.com broadcast at Detroit on Jan. 6 at 7 p.m.  The league weekend concludes Sunday afternoon at Wright State at 2 p.m.

Scouting Green Bay: The Phoenix enter Saturday afternoon owning a 6-7 record on the season, including a 2-1 mark in Horizon League play.  GB fell in its last contest, at Butler on Thursday night, by a 53-49 score.  Alec Brown leads the Phoenix with 13.6 points per game and also grabs 7.3 rebounds per game, while Brendan Cougill paces Green Bay on the boards with 7.5 rpg.

New Year’s Eve Drama: If Saturday’s game is anything like the last two times the Crusaders have played a league game on New Year’s Eve, it should go right down to the wire.  On Dec. 31, 1997, Valpo took on Western Illinois in Macomb in a hotly contested Mid-Con battle that ended in the Leathernecks’ favor, 63-62, as a late jumper from Bryce Drew was ruled just a two-point field goal.  Then, two years ago, the Crusaders hosted Milwaukee on New Year’s Eve, and trailing by one with 3.8 seconds to play, Brandon McPherson intercepted an inbounds pass just inside halfcourt and took it all the way to the rim, laying it in with 0.9 seconds remaining to give Valparaiso an improbable 55-54 win.

Defense or Offense, Not Both: Over Valpo's seven games in December, the Crusaders and their opponents have each scored at least 70 points five times apiece and have combined to hit 80 points on six occasions.  But the two times Valpo and the opposition haven’t hit 70 have coincided in the same games, as the Crusaders downed Northern Illinois 59-48 and fell to Milwaukee last time out 57-55.

3-Point Woes: The Crusaders struggled from beyond the 3-point arc last time out against Milwaukee, shooting just 1-for-17 from downtown in the two-point loss.  It marked the second time this year that Valpo has had a rough night from 3-point range, as the Crusaders won a game against Akron earlier this year in which they went 0-for-14 from downtown.  The woes from deep have come despite having two of the league’s top-10 in both 3-pointers/game and 3-point percentage.

Proficiency Inside the Arc: Valparaiso’s success shooting from 2-point range has carried over into the 2011-2012 season. Last season, the Crusaders finished the year hitting 55.3% of their 2-point attempts, good for third nationally. So far this year, Valpo has connected at an even better clip from inside, knocking down 57.0% of its tries from inside the arc, third in the nation in the category. In fact, of Valpo’s nine scholarship players who have played all season, seven are hitting at least half of their 2-point attempts.

Pouring In the Points: While the end result didn't go the Crusaders' way, Valpo made a game of it Dec. 23 at Bankers Life Fieldhouse against IUPUI, rallying from down 17 at the half to tie the score on two occasions.  The Crusaders ended up scoring 62 second-half points, the most points in a single 20-minute stanza in at least the last decade by a Valpo team.  The Crusaders shot 21-of-39 from the floor in the 2nd half, including a remarkable 8-of-11 from behind the 3-point line, and also converted 12-of-16 from the foul line.

Hitting the Boards: The Crusaders have held a significant edge in the rebounding department over their opponents so far this year.  Valpo gives up just 31.9 rebounds per game to the opposition, second-lowest in the league, and is out-rebounding opponents by nearly four boards per game.  Ryan Broekhoff leads the way on the boards with a league-best 9.4 rebounds per game, while Kevin Van Wijk averages 6.1 rebounds per game as well.  In fact, Broekhoff has pulled down on his own more defensive rebounds this year (102) than any other league player has total rebounds.

Home Court Advantage: With 15 regular season home games slated for the ARC this year, Valparaiso has plenty of opportunities to utilize its home court advantage.  Despite losing their last two home contests by a combined four points, the Crusaders are still 5-2 at home this year and now own a 251-112 (.691) all-time record at the ARC, including a 198-47 (.808) mark over the last 18-plus years at home.  The Crusaders have also finished above .500 on their home court in each of the last 18 years.  Valpo is looking to avoid its first three-game losing streak at the ARC since Jan. 26-Feb. 14, 2008.

Shots From the Heart: Both Valpo head coach Bryce Drew and assistant coach Roger Powell Jr. are participating in the 2nd Annual Shots From the Heart Tournament, in benefit of the Skip Prosser Foundation.  The tournament was started last year to help create more awareness for the growing problem of heart disease, and consists of two 64-coach fields (one bracket of head coaches and one bracket of assistant coaches) participating in a free throw shooting contest.  Both Drew and Powell have advanced to the second round, where they face Ole Miss head coach Andy Kennedy and Arizona assistant coach James Whitford, respectively.

Everyday He’s Doubling: Junior Ryan Broekhoff has simply been one of the Horizon League’s best and most versatile players through the first two months of the season.  Last time out, Broekhoff registered his seventh double-double of the season, posting 18 points and 12 rebounds, both game highs, against Milwaukee.  The junior’s seven double-doubles easily lead the Horizon League and rank among the national leaders, while they also are more than the entire Valpo team has had in a single season since 2006-2007, when Urule Igbavboa registered 10 double-doubles.  Broekhoff by far leads the league in rebounding (9.4 rpg) and ranks third in scoring (15.2 ppg), while also ranking among the league’s top-ten in free throw pct., 3-point pct. and 3-pointers/game.

Van Wijk Does Work: While junior Kevin Van Wijk shot under 50% from the floor for just the third time this year against Milwaukee (5-of-11), he finished the night with 15 points, his 11th double-figure scoring effort of the season.  The junior, who ranks fourth in the league with 14.8 ppg on the season, easily leads the Horizon League in field goal percentage, hitting at a 62.4% clip from the floor this year.  While he is two makes shy of qualifying for the NCAA national leaders in the category, Van Wijk would rank among the top-ten nationally as well.  In addition, the junior continues to get to the free throw line, as his free throw rate of 99.0 (100 FTA, 101 FGA) ranks fifth nationally.

Buggs Drives Inside: Redshirt junior Erik Buggs made use of his quickness Thursday against Milwaukee, constantly slashing towards the basket and ending the night with 12 points on 6-of-9 shooting.  It was the second double-digit scoring effort of the year for Buggs, both of which have come in Valpo’s two Horizon League games (13 @ Butler).  His six field goal makes also matched his career high, a mark he hadn’t reached since January of his junior year.