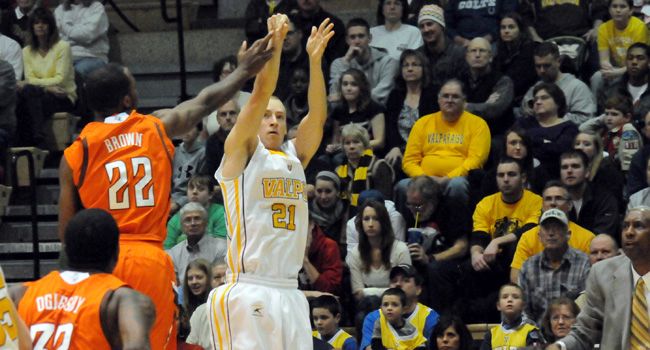 Next Up in Crusader Basketball: Valparaiso looks for its third straight victory and attempts to improve to 3-0 on the road in Horizon League play as the Crusaders, one of five squads tied atop the league standings entering this weekend, face off at Wright State against the Raiders Sunday afternoon.

Last Time Out: Redshirt junior Erik Buggs, who took a charge defensively to give the Crusaders possession, received an inbounds pass in a tie game with 4.6 seconds left and took it the length of the court himself, driving down the left side and going all the way to the basket before laying it in at the buzzer to give Valparaiso a 73-71 victory Friday evening in Horizon League play against Detroit.  Buggs’ basket capped a frantic closing stretch where the lead changed hands four times in the final 90 seconds.  The Crusaders were able to stay in the ballgame thanks to the hot shooting of Will Bogan, who hit a Valpo season-best seven 3-pointers en route to a game-best 23 points.

Following the Crusaders: Every game this season will be available on the Valpo Sports Radio Network, with Sunday's game broadcast live on WAKE (1500 AM, Valparaiso), WEFM (95.9 FM, Michigan City) and WJOB (1230 AM, Hammond).  Todd Ickow is back for his 20th season on play-by-play, while Aaron Leavitt will join him on color commentary Sunday.  There will be a live free video webcast through the Horizon League Network as well.  Links to the live audio and video webcasts, as well as a link to live statistics, will also be available at www.valpoathletics.com.

Series Notes: Wright State leads the all-time series against the Crusaders, 10-7, but it has been a series of runs between the two squads.  WSU won the first five in the series, Valpo took the next five, and then the Raiders claimed the next five games.  The Crusaders have won the last two, including a 58-56 win in Valpo in their last meeting on Feb. 12, 2011.  Howard Little scored 17 in that victory, while Brandon Wood and Cory Johnson added 10 points each.

The Road Ahead: Valpo returns to the ARC for its only home games this month next weekend, hosting Youngstown State on Friday evening and Cleveland State on Sunday afternoon.  The following weekend brings the pair of short road trips, however, as the Crusaders travel to Chicago twice to face Loyola (Jan. 19) and UIC (Jan. 21).

Scouting Wright State: The Raiders enter Sunday's game at 8-9 overall and 3-2 in Horizon League play, one-half game outside the logjam at the top of the league standings.  WSU has played a number of close games in Horizon League play already, most recently falling to Butler at home on Friday, 63-62, when a last-second attempt by Julius Mays was off the mark.  Mays is the only Raider averaging in double figures, scoring 13.4 ppg, as WSU scores just 59.1 ppg and allows just 62.2 ppg.

Right Down to the Wire: Valpo's players are surely gaining a lot of experience in how to play the final minutes of tight games.  Over the last seven contests, incredibly five of them have been decided by three points or less.  The Crusaders are 3-2 in the close games over that stretch, including wins in each of the last two.  In fact, Valpo's four Horizon League games to date have been decided by two, three and two points, with the other game a six-point win in overtime.

Defense or Offense, Not Both: Over Valpo's last nine games, the Crusaders and their opponents each scored at least 70 points seven times apiece and have combined to hit 80 points on eight occasions.  But the two times Valpo and the opposition didn’t hit 70 points coincided in the same games, as the Crusaders downed Northern Illinois 59-48 and fell to Milwaukee 57-55.  In fact, over the last seven games, Valpo has scored at least 73 points five times, but has failed to reach even 60 points the other two times.

To 3 Or Not to 3: An up-and-down season from behind the 3-point line continued in the Crusaders’ win over Detroit last time out, with eight of Valpo's nine players combining to go just 1-for-12.  But Will Bogan stepped up and went 7-of-8 from deep, giving the Crusaders an 8-for-20 (.400) night as a team.  Seven times this year now, Valpo has hit at least eight triples, including four of the last six games.  But the Crusaders have also had a pair of games in which they've hit either zero or one 3-pointer, including three games back against Milwaukee.

Proficiency Inside the Arc: Valparaiso’s success shooting from 2-point range has carried over into the 2011-2012 season. Last season, the Crusaders finished the year hitting 55.3% of their 2-point attempts, good for third nationally. So far this year, Valpo has connected at an even better clip from inside, knocking down 57.3% of its tries from inside the arc, third in the nation in the category. In fact, of Valpo’s nine scholarship players who have played most of the season, seven are hitting at least half of their 2-point attempts.  Last time out, the Crusaders maintained their season rate, hitting 16-of-28 (57.1%) from inside the arc.

Home Court Advantage: With 15 regular season home games slated for the ARC this year, Valparaiso has plenty of opportunities to utilize its home court advantage.  With the win over Green Bay last Saturday, the Crusaders are now 6-2 at home this year and now own a 252-112 (.692) all-time record at the ARC, including a 199-47 (.809) mark over the last 18-plus years at home.  The Crusaders have also finished above .500 on their home court in each of the last 18 years.

Shots From the Heart: Both Valpo head coach Bryce Drew and assistant coach Roger Powell Jr. are participating in the 2nd Annual Shots From the Heart Tournament, in benefit of the Skip Prosser Foundation.  The tournament was started last year to help create more awareness for the growing problem of heart disease, and consists of two 64-coach fields (one bracket of head coaches and one bracket of assistant coaches) participating in a free throw shooting contest.  Both Drew and Powell have advanced to the second round, where they face Ole Miss head coach Andy Kennedy and Arizona assistant coach James Whitford, respectively.

Bogan Goes Bananas: Redshirt junior Will Bogan had a shooting performance last time out at Detroit which reminded head coach Bryce Drew of Michael Jordan's shooting in Game 1 of the 1992 NBA Finals against Portland.  Bogan connected on his first six field goal attempts, including five 3-pointers, before missing a last-second 3-point effort going into the half.  The Ole Miss transfer then knocked down both his 3-point tries in the first six minutes of the second half, finishing the night 7-of-8 from behind the arc.  Bogan, who set a new career high with 23 points, was the first Valpo player to hit seven 3-pointers since Brandon Wood canned seven treys against the Titans in HL quarterfinal action last year.

Big Plays Late: Guards Erik Buggs and Jay Harris, who average a combined 16 points per game on the season, had accounted for just three points through the first 39 and a half minutes of Friday's contest at Detroit.  But then Harris converted a layup to tie the game in the final 30 seconds to set up Buggs' buzzer-beating heroics.  For Harris, who has a team-high 16 points on the season in the final minute of the game, it was his second consecutive game with a big shot late, as he had a key 3-pointer over Green Bay's Alec Brown on Dec. 31 to extend Valpo's lead to six points late.

Model of Consistency: Junior Ryan Broekhoff has simply been one of the Horizon League’s best and most versatile players through the first two months of the season.  Last time out at Detroit, Broekhoff posted his typical solid stat line, finishing with 14 points, seven rebounds and four assists.  Broekhoff, who ranks among the team's top-three in all five major stats, has posted seven double-doubles on the season, which easily lead the Horizon League and are more than the entire Valpo team has had in a single season since 2006-2007, when Urule Igbavboa registered 10 double-doubles.  Broekhoff by far leads the league in rebounding (9.2 rpg) and ranks fourth in scoring (15.1 ppg), while also ranking among the league’s top-ten in free throw pct. and 3-pointers/game.

Van Wijk Does Work: Junior Kevin Van Wijk again hit at least half his shot attempts in Friday's win at Detroit, going 6-of-12 from the floor en route to 17 points.  The junior, who ranks third in the league with a scoring average of 15.1 ppg on the season, easily leads the Horizon League in field goal percentage, hitting at a 62.5% clip from the floor this year.  Van Wijk ranks among the top-ten nationally as well in the category.  In addition, the junior continues to get to the free throw line at an impressive rate, as his free throw rate of 95.83 (120 FGA, 115 FTA) is good for fourth in the nation.