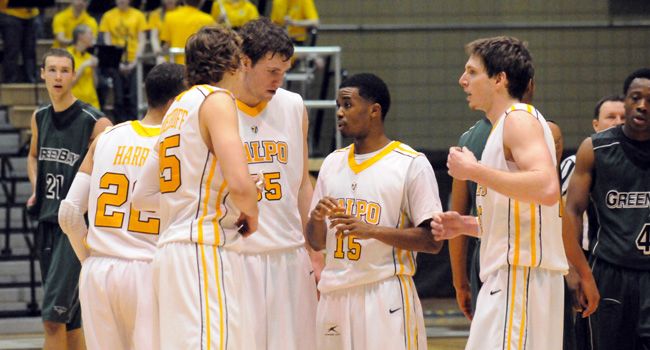 The Crusaders are looking to improve to 5-2 in the Horizon League. (Ray Acevedo)
Cleveland State at Valparaiso | January 15, 2012
Related Links
Related Links

Next Up in Crusader Basketball: Valparaiso looks for a Horizon League weekend sweep at the ARC as the Crusaders host Cleveland State on Sunday afternoon.  For the second straight contest, the Crusaders will be taking on a team tied atop the league standings.

Last Time Out: Four Crusaders scored in double figures, led by a game and career-high 23 points from junior Kevin Van Wijk, as Valparaiso handily defeated Youngstown State, 76-62, Friday night at the Athletics-Recreation Center.  Junior Ryan Broekhoff had his usual consistent game, ending the night with 14 points and eight rebounds.  Junior Richie Edwards had a good game in the post as well, coming off the bench to spell Van Wijk for 18 minutes and scoring 12 points, while redshirt junior Will Bogan completed the quartet in double figures with 11 points, including a 3-of-5 effort from behind the arc.

Following the Crusaders: Every game this season will be available on the Valpo Sports Radio Network, with Sunday's game broadcast live on WAKE (1500 AM, Valparaiso), WEFM (95.9 FM, Michigan City) and WJOB (1230 AM, Hammond).  Todd Ickow is back for his 20th season on play-by-play, while Keaton Gillogly will join him on color commentary Sunday.  As always with every home game, there will be a live free video webcast through the Horizon League Network as well.  Links to the live audio and video webcasts, as well as a link to live statistics and the Valpo Gameday page, will also be available at www.valpoathletics.com.

Series Notes: Cleveland State holds a sizable 22-6 edge in the all-time series over the Crusaders, including seven of nine since Valpo joined the Horizon League and the two squads’ last meeting in Cleveland last season.  The Crusaders have earned victories in the last two games at the ARC, however, downing the Vikings 64-58 at home a season ago thanks to 20 points from Cory Johnson.

The Road Ahead: Valpo hits the road for its final four January games, starting off with a pair of short excursions as the Crusaders travel to Chicago twice to face Loyola (Jan. 19) and UIC (Jan. 21).  The next weekend brings the Green Bay (Jan. 26) and Milwaukee (Jan. 28) road trip for Valpo.

Scouting Cleveland State: The Vikings enter the weekend at 15-3 overall and are tied with Milwaukee atop the Horizon League standings at 5-1, one game ahead of the Crusaders.  Cleveland State has only lost to Hofstra, USF and Youngstown State this year and has a signature win in the season opener at Vanderbilt.  The Vikings have won this year with defense, forcing over 18 turnovers a game, including 2.5 steals a game from D’Aundray Brown, who also leads CSU with 12.0 ppg.  Trevon Harmon and Jeremy Montgomery add 11.5 and 10.6 ppg, respectively.

Bouncing Back With a Big Win: The Crusaders’ 14-point win Friday over Youngstown State followed an 18-point defeat at the hands of Wright State last Sunday, marking the first time since wins over IU Kokomo and Duquesne in mid-November that Valpo has played in consecutive games decided by double figures.  It also marked the third time out of Valpo’s four worst HL losses that the Crusaders have rebounded with a double-digit victory.

Assists and Turnovers: A team’s assist/turnover ratio measures how well the team shares the basketball and how well they hold on to the ball.  Friday, the Crusaders did both at a season-best rate.  Valpo tallied 20 assists on 27 baskets, matching its highest number of assists since picking up 21 in a win over Detroit on Feb. 10, 2011.  Meanwhile, the Crusaders gave up just seven possessions via turnover, their fewest of the season in a D-I game, and just three of those turnovers came in the final 35 minutes.

Right Down to the Wire: Valpo’s last two games have been an anamoly compared with the way most of the Crusaders’ games have gone this season.  Valpo's players have gained a lot of experience in how to play the final minutes of tight games, as five of Valpo’s last nine games have been decided by three points or less. The Crusaders are 3-2 in the close games over that stretch, including wins in each of the last two. In fact, Valpo's four Horizon League games prior to the Wright State game last Sunday were decided by two, three and two points, with the other game a six-point win in overtime.

Home Court Advantage: This weekend returns the Crusaders to their home court, a place where they have excelled in the past.  With 15 regular season home games slated for the ARC this year, Valparaiso has plenty of opportunities to utilize its home court advantage.  With the win over Youngstown State on Friday, the Crusaders are now 7-2 at home this year and now own a 253-112 (.693) all-time record at the ARC, including a 200-47 (.810) mark over the last 18-plus years at home.  The Crusaders have also finished above .500 on their home court in each of the last 18 years.

Shots From the Heart: Both Valpo head coach Bryce Drew and assistant coach Roger Powell Jr. are participating in the 2nd Annual Shots From the Heart Tournament, in benefit of the Skip Prosser Foundation.  The tournament was started last year to help create more awareness for the growing problem of heart disease, and consists of two 64-coach fields (one bracket of head coaches and one bracket of assistant coaches) participating in a free throw shooting contest.  Drew was eliminated in the second round, while Powell has advanced to a third-round matchup against Wake Forest’s Rusty LaRue, having defeated Mike Blaine (Cornell) and James Whitford (Arizona).

A Career High: If it seems like the 23 points is low for the career high for junior Kevin Van Wijk, it’s probably because of the consistency the native of the Netherlands has shown in the scoring column this year.  Van Wijk hit 7-of-14 from the floor and 9-of-11 from the free throw line for his career high 23 against the Penguins on Friday.  The 23-point effort marked the 15th time in 17 games Van Wijk has been in double figures this year and the 12th time he has scored at least 15 points.  The junior, who assumed the league lead in scoring average with 15.5 ppg after Friday, also easily leads the Horizon League in field goal percentage, hitting at a 60.8% clip from the floor this year.  In addition, the junior continues to get to the free throw line at an impressive rate, as his free throw rate of 92.3 (143 FGA, 132 FTA) is good for sixth in the nation.

Model of Consistency: Junior Ryan Broekhoff has simply been one of the Horizon League’s best and most versatile players through the first two months of the season. Last time out against YSU, Broekhoff posted a typical night with 14 points and eight rebounds, both numbers just under his season averages in the categories, along with three assists.  Broekhoff, who ranks among the team's top-three in all five major stats, has eight double-doubles on the season, easily pacing the Horizon League and more than the entire Valpo team has had in a single season since 2006-2007, when Urule Igbavboa registered 10 double-doubles. Broekhoff now sits only behind Van Wijk in scoring league-wide (15.2 ppg) and leads the league in rebounding (9.3 rpg), trying to become the first player since Youngstown State's Quin Humphrey (2005-2006) to lead the league in both categories in the same season.

More Scorers: Nine times this season now, the Crusaders have placed four players in double figures, going 7-2 in such games following Friday’s win over Youngstown State.  Versus the Penguins, redshirt junior Will Bogan continued his hot 3-point shooting, going 3-for-5 from beyond the arc en route to 11 points.  Bogan now ranks among the league’s top-5 in both 3-pointers per game (2.1, 4th) and 3-point percentage (.422, 5th).  Meanwhile, junior Richie Edwards scored in double figures for just the second time in the last 10 games, working hard down low in relief of Van Wijk to the tune of 6-of-10 shooting for 12 points in 18 minutes.  Edwards (9.4 ppg) and Bogan (8.5 ppg) rank third and fourth on the team in scoring in Horizon League action, respectively.