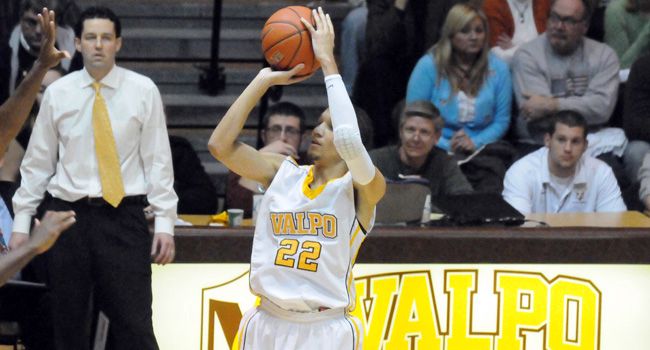 Next Up in Crusader Basketball: Coming off their biggest road win in nearly 12 years, Valparaiso looks for its fourth consecutive victory as the Crusaders aim for a sweep of the Chicago road trip against UIC at 3 p.m. on Saturday afternoon.  The showdown with the Flames concludes the first half of the Horizon League slate.

Last Time Out: Valparaiso led nearly from start to finish, placing four players in double figures in the scoring column as the Crusaders captured their third straight victory with a 69-48 triumph over Loyola Thursday evening in Chicago, Ill.  Sophomore Jay Harris led the charge with an 18-point effort off the bench, while junior Ben Boggs added a career-high 14 points.  Juniors Kevin Van Wijk (14) and Ryan Broekhoff (13) finished the night in double figures as well.

Following the Crusaders: Every game this season will be available on the Valpo Sports Radio Network, with Saturday's game broadcast live on WAKE (1500 AM, Valparaiso), WEFM (95.9 FM, Michigan City) and WJOB (1230 AM, Hammond).  Todd Ickow is back for his 20th season on play-by-play, while Keaton Gillogly will join him on color commentary Saturday.  The game can also be seen locally on Comcast SportsNet Chicago.  As always with every league game, there will be a live free video webcast through the Horizon League Network as well.  Links to the live audio and video webcasts, as well as a link to live statistics, will also be available at www.valpoathletics.com.

Series Notes: UIC leads the all-time series against the Crusaders, 29-14, but Valpo holds a 5-3 advantage since joining the Horizon League, including a streak of four straight victories.  The two squads last met on Senior Night at the ARC last year, with the Crusaders coming out on top, 79-65.  Cory Johnson paced Valpo with 18 points in the win, while Brandon Wood added 14 points.

Scouting UIC: The Flames enter Saturday afternoon’s game at 6-12 overall and 2-6 in Horizon League play, most recently falling at home to Butler Thursday night, 57-49.  UIC scores just 61.3 ppg and gives up 66.7 ppg, but has three players averaging in double figures.  Daniel Barnes leads the way with 11.3 ppg, hitting better than two 3-pointers per game, while Gary Talton adds 10.8 ppg.  Darrin Williams contributes 10.1 points and 6.7 rebounds per contest from the post.

A Big Road Win: Valparaiso led by 20+ points for much of the second half Thursday night at Loyola, eventually ending the night with a 21-point win.  That easy of a victory on the road was something that hasn’t been seen from a Crusader squad in over a decade.  The last time Valpo won a road game by more than 21 points was back on Feb. 7, 2000, when the Crusaders downed Belmont, 86-60, while their last league road win by that kind of margin came Jan. 21, 1999 at Chicago State (74-42).  It also marked Valpo’s fourth win by at least 20 points in Horizon League play since joining the league in 2007-08.

Five Out Of Six: After a long stretch of alternating results ended with back-to-back losses to IUPUI and Milwaukee, dropping Valpo to 8-6 and 1-1 in Horizon League play, the Crusaders have bounced back nicely, earning victories in five of their last six games, all league contests.  In the five wins, Valpo has averaged 76 points per game and shot 52.9% from the floor.  The Crusaders have also stepped up defensively recently, combining to hold YSU and CSU to 39.7% shooting from the floor and 26 free throw attempts over last weekend’s two wins, and then limiting Loyola to just 48 points on Thursday night.

Knocking Down Shots: The Crusaders have been the Horizon League’s best shooting team from the field all season long, entering this weekend ranked 25th nationally with a field goal percentage of 48.4%.  But over the last two games, Valpo has taken its accuracy to a new level.  The Crusaders hit 27 of their 45 field goal attempts against CSU, knocking down 60% of their shots, their highest single-game percentage versus a D-I squad since connecting on 63.2% at Oakland last season.  Then, last time out against Loyola, Valpo connected on 56.9% (29-of-51) from the floor.  The Crusaders have hit 50% or better in 10 of their 18 D-I games this year.

Proficiency Inside the Arc: Valparaiso’s success shooting from 2-point range has carried over into the 2011-2012 season. Last season, the Crusaders finished the year hitting 55.3% of their 2-point attempts, good for third nationally. So far this year, Valpo has connected at an even better clip from inside, knocking down 57.8% of its tries from inside the arc, leading the nation in the category. In fact, of Valpo’s nine scholarship players who have played the majority of the season, seven are hitting at least half of their 2-point attempts.  Valpo continued its strong presence inside the arc against Loyola, hitting 21-of-32 (65.6%) of its 2-point tries.

Home Court Advantage: With 15 regular season home games slated for the ARC this year, Valparaiso has plenty of opportunities to utilize its home court advantage.  With the win over Cleveland State on Sunday, the Crusaders are now 8-2 at home this year and now own a 254-112 (.694) all-time record at the ARC, including a 201-47 (.810) mark over the last 18-plus years at home.  The Crusaders have also finished above .500 on their home court in each of the last 18 years.

Shots From the Heart: Both Valpo head coach Bryce Drew and assistant coach Roger Powell Jr. are participating in the 2nd Annual Shots From the Heart Tournament, in benefit of the Skip Prosser Foundation.  The tournament was started last year to help create more awareness for the growing problem of heart disease, and consists of two 64-coach fields (one bracket of head coaches and one bracket of assistant coaches) participating in a free throw shooting contest.  Drew was eliminated in the second round, while Powell has advanced to a third-round matchup against Wake Forest’s Rusty LaRue, having defeated Mike Blaine (Cornell) and James Whitford (Arizona).

Short Bench: Just one game this season has Valpo been able to play all 10 scholarship athletes  who are eligible, Dec. 17 against Oakland.  Prior to that point, Ben Boggs had to sit out the first semester after transferring in from Virginia Tech, while Tommy Kurth has missed the last nine games due to illness.  Valpo is also without scholarship players Bobby Capobianco, who must sit out the entire season after transferring to Valpo from Indiana, and Vashil Fernandez, who will be sitting out this season.

A Set Rotation: Head coach Bryce Drew seems to have settled into a regular eight-man rotation as the Crusaders hit the heart of Horizon League play.  Over the last five games, all eight regulars have played at least 13 minutes in every game, while over the same stretch, only once (Broekhoff at Wright State) has any Crusader been asked to play more than 35 minutes.  Against Loyola, all eight regulars saw between 17 and 29 minutes of action.

Harris Draining 3’s: While sophomore Jay Harris comes off the bench for the Crusaders, he plays starter-type minutes, averaging 25.7 mpg.  Thursday against Loyola, he took full advantage of his 28 minutes of play, connecting on 4-of-7 from 3-point range and matching his career high with seven field goals en route to a game-high 18 points.  Harris, who has now hit at least three 3-pointers in five games this year, also handed out five assists and is averaging nearly four assists a game over Valpo’s last six contests.

Boggs Breaks It Down: Junior Ben Boggs came into Thursday’s game averaging four points per game since becoming eligible at the semester break.  But against the Ramblers, he surpassed that mark within the first three minutes en route to his best game as a Crusader.  The Virginia Tech transfer scored 11 first-half points en route to a 14-point night, going 5-of-6 from the field, including a perfect 3-for-3 from behind the 3-point line.

Dominant Post: While junior forward Kevin Van Wijk couldn’t match his career high of 23 points for the third straight game on Thursday, he did more than enough in his limited playing time against the Ramblers.  Van Wijk, who saw just 17 minutes of action in the blowout victory, hit his first six shots from the field in a 6-for-7 shooting performance, ending the night with 14 points.  The effort raised his season FG% to 63.2%, easily the best in the Horizon League and good for eighth nationally.  Van Wijk, who was honored as the Horizon League Player of the Week for the second time this season on Monday after his back-to-back 23-point games, has five 20+ scoring efforts on the year and has scored at least 15 points on 13 occasions, including six of the last eight games.

Model of Consistency: Junior Ryan Broekhoff has simply been one of the Horizon League’s best and most versatile players through the first two months of the season. Last time out against CSU, Broekhoff posted a typical night with 13 points and eight rebounds, both numbers just under his season averages in the categories.  Broekhoff, who ranks among the team's top-three in all five major stats, has eight double-doubles on the season, easily pacing the Horizon League and more than the entire Valpo team has had in a single season since 2006-2007, when Urule Igbavboa registered 10 double-doubles. Broekhoff now sits third in scoring league-wide (15.1 ppg) and leads the league in rebounding (9.1 rpg), trying to become the first player since Youngstown State's Quin Humphrey (2005-2006) to lead the league in both categories in the same season.