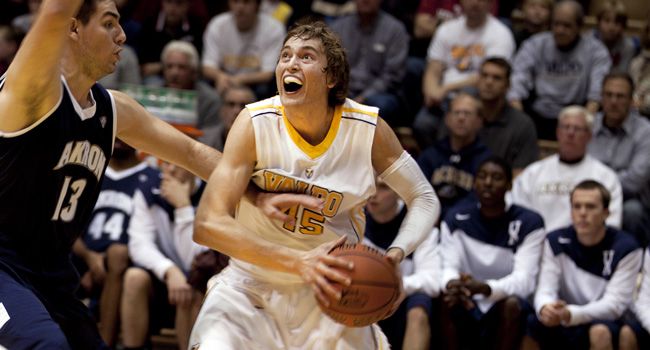 Valparaiso rallied from an 11-point second-half deficit against Milwaukee and limited the Panthers to just 11 points in the game’s final 17:30 as the Crusaders earned a hard-fought 55-52 victory Saturday afternoon in Milwaukee, Wis.

“Our players really did all the work today - it was a joy to sit there and watch them play,” said Crusader head coach Bryce Drew.  “I enjoyed watching the resiliency of the team, especially in the game's final 10 minutes.  With it being Coaches vs. Cancer weekend, we got the chance to take the team to the Children's Hospital in Milwaukee yesterday and spend time with children fighting cancer.  I think it really touched the players and made them realize how lucky they are to be playing Division I basketball, and I think our effort today was really a tribute to those kids.”

Trailing 41-30 two and a half minutes into the second half after the Panthers’ third basket of the half, the Crusaders would outscore Milwaukee by a 25-11 count the rest of the way.  Valpo chipped away slowly at the Panther advantage, starting with sophomore Jay Harris (Aurora, Ill./Oswego East) nailing a floater while being fouled for an old-fashioned 3-point play.  Four minutes later, redshirt junior Will Bogan (Boise, Idaho/Vallivue [Ole Miss]) drilled a 3-pointer to move the Crusaders within 41-37 with 13 minutes remaining.

The teams would trade blows over the next few minutes, with the Crusaders getting a big 3-pointer from junior Matt Kenney (Mooresville, Ind./Mooresville) with 11:29 to play and a 3-point play inside from junior Kevin Van Wijk (Hoofddorp, Netherlands/Katholieke Scholengemeenschap Hoofddorp) at the 9:36 mark, the latter of which cut the deficit to just 46-43.  Van Wijk’s basket came during a stretch of over five minutes in which the Valpo defense held Milwaukee without a point.

The Crusaders used their defensive lockdown to take only their second lead of the ballgame four minutes later.  Valpo’s defense came up with steals on back-to-back Milwaukee possessions, the first of which Harris recorded and took coast-to-coast for a layup.  Then Van Wijk knocked the ball away on a post entry to create another fast break chance, with Kenney eventually taking it in for the go-ahead basket.

A bucket by UWM’s Paris Gulley at the 4:52 mark briefly returned the lead to the Panthers, but on Milwaukee’s next possession, junior Ryan Broekhoff (Frankston, Victoria, Australia/Australian Institute of Sport) came up with a steal and then finished on the other end off a feed from Harris to put Valpo in front 49-48.  Then, on the Crusaders’ next trip offensively, Harris’ baseline floater with the shot clock running down was off the mark, but junior Ben Boggs (Roanoke, Va./Hidden Valley [Virginia Tech]) was there for the offensive rebound and easy putback, giving Valpo a three-point lead with 2:46 remaining.

Tony Meier split a pair of free throws for Milwaukee with 1:49 to play to cut the Crusader edge to 51-49, but Broekhoff again made a big play, driving the lane with the shot clock running down and laying the ball in with 1:18 to go, making it 53-49 Valpo.  But the Panthers’ Kaylon Williams responded with a 3-pointer on the other end to make it a one-point game inside the final minute.

Valpo worked the ball inside on its possession, with Van Wijk eventually drawing a foul as he was shooting with 32.5 seconds to play.  The junior calmly drilled both free throws to push the lead to 55-52 with the shot clock off.  That would prove to be the final margin, as Paris Gulley and Williams missed 3-point attempts on Milwaukee’s final possession before the ball went out of bounds to the Panthers with 1.1 seconds left.  Williams took the in-bounds pass, but his last-ditch effort from the left wing bounced off the rim and fell to the floor to close out the Crusader victory.

Milwaukee scored the game’s first six points on Saturday afternoon, as Valpo didn’t get on the board until nearly four minutes into the game with a Van Wijk layup.  The Crusaders scored seven in a row to briefly take the lead, capped by a 3-pointer from Erik Buggs (Memphis, Tenn./Mitchell), but the Panthers answered with 12 consecutive points to take a double-digit lead just over 11 minutes into the ballgame.  Faced with a deficit as large as 12 points in the first half, Valpo cut it to as little as four points and went into the locker room at the half trailing 35-28.

The Crusaders’ junior duo of Broekhoff and Van Wijk both made it into double figures on Saturday.  Broekhoff ended the day with team bests of 11 points, eight rebounds, three assists and three steals, while Van Wijk posted 10 points and five rebounds.  Boggs and Kenney added eight points apiece as well.  Valpo shot just 35.1% (20-of-57) from the floor and 5-of-19 (26.3%) from behind the 3-point line, but committed just 12 turnovers and came up with eight steals on the defensive end.

Valparaiso (15-8, 8-3 Horizon) returns home for five of its final seven Horizon League games of the year, starting Thursday evening at a special start time of 6:30 p.m. against Detroit.  As always, all the action can be heard live on the Valpo Sports Radio Network and seen online on the Horizon League Network.  Links to both the audio and video webcasts, as well as live stats and the Valpo Gameday page, will be available at www.valpoathletics.com.