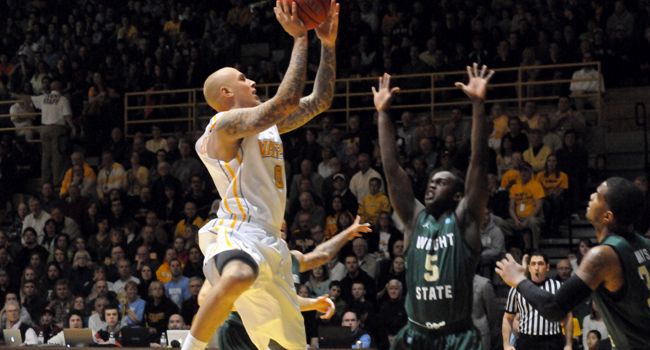 Valparaiso shot a blistering 65.6% from the floor on Saturday evening and missed just two shots from inside the 3-point line, leading nearly start-to-finish in a 63-54 Horizon League victory over Wright State in front of a raucous crowd of 4,727 at the Athletics-Recreation Center.  The Crusaders have now won seven of their last eight contests and are currently in a virtual tie atop the league standings.

It was the Crusaders’ best shooting performance against a Division I team since connecting on 66.7% of their attempts in a Dec. 8, 2007 victory at Detroit.  Valpo shot 21-of-32 for the game, and the team which entered the day second in the nation in 2-point accuracy went 13-of-15 (86.7%) from inside the arc.  All eight Crusaders who touched the floor hit at least one shot on Saturday, while only one of the eight missed more than two field goal attempts.

But despite the hot shooting pace, it would be a close game for the most part because the Raiders forced 24 Valpo turnovers over the course of the evening.  The Crusaders turned the ball over 12 times apiece in both the first and second half, but stepped up on the defensive end, surrendering just 12 points total off their 24 miscues.  The defense also helped limit Wright State to 29.6% (16-of-54) shooting on the evening, including just a 5-of-24 (20.8%) effort from beyond the 3-point line.

The Raiders’ only lead came at 2-0, with Valpo scoring the next six points to take the lead for good.  Wright State briefly tied the game at six-all, and kept within striking distance, as a Johann Mpondo jumper cut the Crusader lead to one (17-16) with 6:20 to play in the opening half.

Valpo turned on the offense over the final six minutes of the half, however, to earn a double-figure advantage into the halftime break.  The Crusaders went on a 14-2 run, starting with baskets on three straight possessions on a layup by Kevin Van Wijk (Hoofddorp, Netherlands/Katholieke Scholengemeenschap Hoofddorp), a triple by Ben Boggs (Roanoke, Va./Hidden Valley [Virginia Tech]), and a spin move for a layup by Erik Buggs (Memphis, Tenn./Mitchell).

The Crusaders pushed the lead into double figures and earned their largest advantage of the opening 20 minutes after running down the shot clock for a Will Bogan (Boise, Idaho/Vallivue [Ole Miss]) 3-pointer with just 12 seconds to play in the half, pushing the lead to 31-18.  But Wright State landed the last blow before the break, as Reggie Arceneaux hit a contested triple from the corner just before the buzzer to make it 31-21 at the half.

Valpo would fend off every Wright State advance in the second half, never letting the Raiders within one possession of the lead.  A jumper from in close by Armond Battle with 15 minutes to play cut the lead to 36-30, but Matt Kenney (Mooresville, Ind./Mooresville) responded with two 3-pointers in the Crusaders’ next three trips to push the lead back to 12 points.  A pair of free throws brought Wright State within 49-42 with eight minutes to go, but Ryan Broekhoff (Frankston, Victoria, Australia/Australian Institute of Sport) answered with a driving layup while being fouled, converting the old-fashioned 3-point play.

But the biggest shot of the game came from Richie Edwards (Lakeland, Fla./Lakeland [Hillsborough C.C.]).  With the Raiders within 52-47 and approaching the final media timeout, the Crusaders faced a shot clock which was winding down.  Trapped underneath the basket, Broekhoff’s only move was to kick to Edwards in the corner.  The junior let fly with a 3-point attempt with two seconds left on the shot clock, and it splashed down through the net as the shot clock expired to make it an eight-point Valpo lead and force a WSU timeout.  Wright State had one final push, cutting the deficit to five (57-52) after a Julius Mays 3-pointer, but the Crusaders surrendered just two free throws to the Raiders in the final 90 seconds.

Edwards came off the bench to lead Valpo on Saturday, matching his effort from two nights earlier with a 16-point performance.  Edwards went 6-of-7 from the floor, including knocking down both his 3-point attempts, and also added four rebounds and two blocked shots.  Van Wijk went 4-for-5 from the field en route to 13 points and six rebounds, while Kenney added 11 points and four assists and Broekhoff 10 points and six rebounds.

“We were a little banged up tonight, with Kevin fighting sickness and Ryan a bit hobbled, but I thought Matt and Richie really did a great job helping to pick up the slack,” said Crusader head coach Bryce Drew.  “Matt hit a couple big threes and made some strong drives to the basket, and Richie has had his best two games back-to-back our last two games.  He hit some big shots when we needed him to tonight, when Wright State was making runs.”

Mays led all players with 20 points and seven rebounds, but Arceneaux was the only other Wright State (11-14, 6-7 Horizon) player in double figures, closing the night with 11 points on just 3-of-13 shooting.  Valpo held a 31-26 advantage on the boards over the Raiders, but WSU did end the night with 12 steals.

Valparaiso (17-8, 10-3 Horizon) faces perhaps the biggest battle of the Horizon League slate next time out, as the two squads atop the league table face off when the Crusaders play at Cleveland State on Thursday evening.  Tipoff is slated for 6 p.m. CST, as always, all the action can be heard live on the Valpo Sports Radio Network and seen online on the Horizon League Network.  Links to both the audio and video webcasts, as well as live stats, will be available at www.valpoathletics.com.