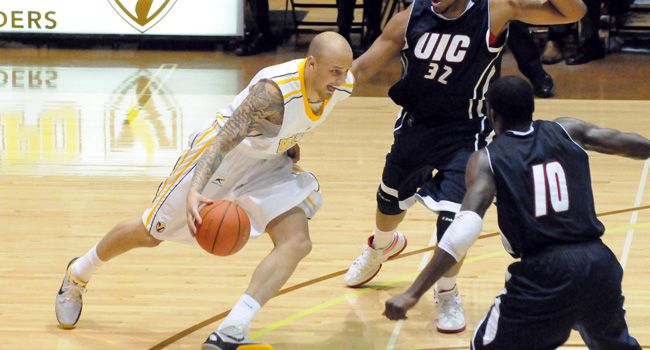 Valparaiso hit eight of its nine 3-point attempts in the second half, including triples on three straight possessions in the closing minutes to claim the lead for good, in a 74-65 victory over UIC Tuesday evening at the Athletics-Recreation Center.

The win, combined with Cleveland State’s loss on Tuesday, clinched at least the two-seed and the corresponding double-bye for the Crusaders in the upcoming Horizon League Championship, meaning Valpo would have to win just two games to win the conference tournament and earn the automatic bid to the NCAA Tournament.  CSU’s loss also leaves Valpo just one win shy of clinching at least a share of the regular season title and hosting rights for the league tournament.

Trailing by 10 at halftime and 11 just over a minute into the second half, Valpo used the three-ball to get back into the game and ultimately take control.  Triples on back-to-back possessions by juniors Ben Boggs (Roanoke, Va./Hidden Valley [Virginia Tech]) and Ryan Broekhoff (Frankston, Victoria, Australia/Australian Institute of Sport) brought Valpo back within 40-34 with 17 minutes to play.

Fast-forward four minutes and the deficit was still seven points before junior Richie Edwards (Lakeland, Fla./Lakeland [Hillsborough C.C.]) and sophomore Jay Harris (Aurora, Ill./Oswego East) combined to account for all of Valpo’s points during a 13-3 spurt which gave the Crusaders their first lead of the ballgame.  Edwards started the run with a pair of free throws before Harris knocked down his first 3-pointer of the game on the next trip to cut the deficit to 45-43 with 12:21 remaining.

UIC responded with a basket on its next possession, but Valpo came right back and went down low to Edwards for a layup to again move within two points.  Following a Flames turnover, UIC went to a zone and Valpo sprung Harris open on the right wing, where he knocked down his second triple to give the Crusaders their first lead of the game, 48-47 with 11:03 to go.

A free throw on UIC’s next trip tied the score, but Valpo answered by scoring for the seventh straight possession, as Edwards knocked down a 3-pointer from straight on to make it 51-48 Crusaders with 10:25 remaining.  UIC would not go away, however, scoring on two of its next three trips to re-claim the lead at 53-51.

A free throw by junior Kevin Van Wijk (Hoofddorp, Netherlands/Katholieke Scholengemeenschap Hoofddorp) with 7:55 to go brought Valpo back within one before the Crusaders started the final barrage from downtown.  First up was redshirt junior Will Bogan (Boise, Idaho/Vallivue [Ole Miss]), who took the extra pass from Broekhoff on the fast break and nailed the triple to give Valpo the lead for good, 55-53.

Then it was junior Matt Kenney (Mooresville, Ind./Mooresville) with the big plays.  After a UIC miss, the Crusaders wound the shot clock down before redshirt junior Erik Buggs (Memphis, Tenn./Mitchell) found Kenney in the corner for a 3-pointer to push the lead to five points.  Then, following a UIC basket which briefly made it a 3-point game, Kenney found himself left alone from behind the arc and nailed his third triple of the game to make it 61-55 with 5:17 to go.

After UIC converted a layup with the shot clock running down, Edwards came up with one more huge play, rebounding his own miss from inside and banking in a fallaway shot while being fouled for an old-fashioned 3-point play, making it 64-57 Crusaders with 4:04 to go.  UIC would get no closer than four points the rest of the way, as on all three occasions which the Flames cut the advantage to four, Valpo responded immediately with points on the other end.

Valpo never led in the first 20 minutes of play, as UIC scored the first basket of the game and the Crusaders could do no better than tie it up.  Van Wijk kept the Crusaders in it early with Valpo’s first six points, starting after missing one game due to injury.  The Crusaders stayed within one possession for a good bit of the half, with a fast-break layup by Broekhoff moving them within 27-25 with 5:20 to play, but UIC ended the half on a 10-2 run to claim a 37-27 lead at the break.

The Crusaders were paced for the second straight game by Edwards, who put up 19 points on Tuesday on 5-of-7 shooting from the floor and an 8-of-9 effort from the foul line.  For Edwards, it was his fifth straight game scoring at least 16 points.  Also off the bench was a stellar performance from Kenney, who posted 14 points on 4-of-4 from the field, including 3-of-3 from behind the 3-point line, to go with seven rebounds, five assists and no turnovers.

“For Kevin to come out tonight and play 22 minutes tonight really says a lot about his heart and his will,” said Crusader head coach Bryce Drew.  “He has been putting everything he’s had into rehab the last few days to come back.  Richie was spectacular off the bench again, really making some big plays during the run in the second half which got us back into the game, along with his 3-point play late in the half.  Matt had a near-perfect night – put up a great line with seven rebounds and five assists to go with his scoring.  He was just a really big part of the reason we won tonight.”

“UIC is a much improved team, something which I don’t think is reflected in their record,” said Drew.  “They came out, played extremely hard and extremely physical, and executed very well, especially in the first half.”

Valparaiso (19-9, 12-4) takes a step out of league play as the Crusaders participate in the Sears BracketBusters X event this Friday evening.  For the second time in as many years, Valpo has earned a televised game and will fly to Los Angeles to take on Loyola Marymount Friday night, Feb. 17, at 8 p.m. CST.  The game can be seen live on ESPNU or online on ESPN3.com.  As always, the Valpo Sports Radio Network will have the audio broadcast, with links for the live audio and video, as well as live stats, available at www.valpoathletics.com.