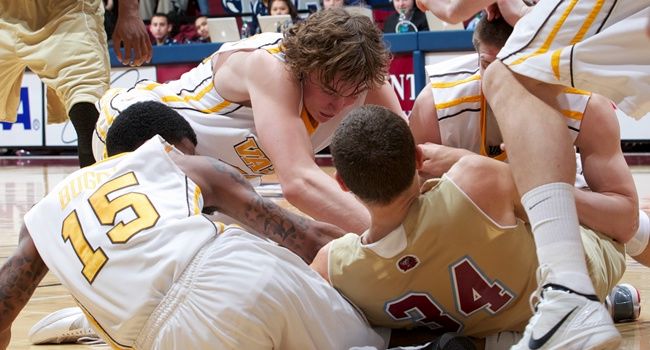 Junior Ryan Broekhoff (Frankston, Victoria, Australia/Australian Institute of Sport) scored 16 points on Friday evening, the 15th of which made him the 31st player in Crusader basketball history to reach 1,000 career points, but it was not enough as Valparaiso fell to Loyola Marymount, 61-53, in the Sears BracketBusters X event in Los Angeles, Calif.

Broekhoff surpassed the 1,000-point milestone with a 3-pointer with 13:08 to play, the second of back-to-back triples which cut Loyola Marymount’s lead to two points at 40-38.  That would be the junior’s last point of the night, however, as he ended the night 5-of-8 from the floor, including 4-of-6 from downtown.  Junior Richie Edwards (Lakeland, Fla./Lakeland [Hillsborough C.C.]) then followed an LMU basket with a triple of his own, Valpo’s third straight 3-pointer to cut the lead to 42-41 with 12:27 remaining.

But that would be the Crusaders’ final point for a stretch of over six minutes, as LMU went on a 10-0 run over the span to push its lead into double figures at 52-41.  A putback by junior Ben Boggs (Roanoke, Va./Hidden Valley [Virginia Tech]) ended the Lions’ spurt, but Valpo would only be able to get as close as seven points on two occasions down the stretch.

The game got off to an inauspicious start for the Crusaders Friday evening, as Loyola Marymount scored the game’s first eight points over the opening 3:20.  In fact, Valpo went to its bench to get its first basket, a 3-pointer by Edwards 3:49 into the ballgame, and then it took nearly four more minutes to get its next bucket, a mid-range jumper from sophomore Jay Harris (Aurora, Ill./Oswego East) which cut the deficit to 11-5.

While the Crusaders were able to score just nine points in the first 12-plus minutes of the game, adding layups by Broekhoff and redshirt junior Erik Buggs (Memphis, Tenn./Mitchell), their defense kept them in the game, limiting LMU to just 18 points over that same time frame.  Valpo then quickly erased most of the deficit, as a 3-point play by Edwards, a pair of free throws from Broekhoff and a 3-pointer by redshirt junior Will Bogan (Boise, Idaho/Vallivue [Ole Miss]) cut the lead to 18-17 with 5:47 to go in the half.

The teams would trade baskets most of the rest of the way in the opening 20 minutes, with LMU taking a 26-23 lead into the locker room.  Coming out for the second half, a 3-pointer by Broekhoff was the only dent in an opening run by the Lions, who opened up a 36-26 advantage just three minutes into the period.  Back-to-back triples by Harris helped keep Valpo in the game, as the Crusaders’ first six baskets of the second half were all 3-pointers, culminating with Edwards’ 3-pointer which cut the lead to one prior to the decisive LMU spurt.

Edwards scored a team-high 17 points for the Crusaders while playing 28 minutes off the bench, going 6-of-11 from the floor while also grabbing five rebounds.  Edwards and Broekhoff were the only Crusaders in double figures, however.  Boggs pulled down a team-best six rebounds, while Buggs handed out five assists and tallied four steals.  Valpo was playing without the services of junior Kevin Van Wijk (Hoofddorp, Netherlands/Katholieke Scholengemeenschap Hoofddorp), who remained in Valparaiso to rehab an injury in preparation for next week’s pair of Horizon League games.

Anthony Ireland led Loyola Marymount (18-10) across the board, as the Lions’ point guard ended the night with team-high totals of 19 points, eight rebounds and five assists.  Ashley Hamilton added 12 points and five rebounds as well.  LMU enjoyed a large advantage on the boards, out-rebounding Valpo by a 37-23 margin, including 13 offensive caroms.

Valparaiso (19-10) returns home to the ARC for its final two regular season Horizon League games next week, starting with a 7:05 p.m. tip on Tuesday evening against Loyola (Chicago).  With a win, the Crusaders would secure at least a share of the league regular season title and would be guaranteed to host the quarterfinals and semifinals of the upcoming Horizon League Championship.  As always, all the action can be heard live on the Valpo Sports Radio Network and seen online on the Horizon League Network.  Links to both the audio and video webcasts, as well as live stats and the Valpo Gameday page, will be available at www.valpoathletics.com.