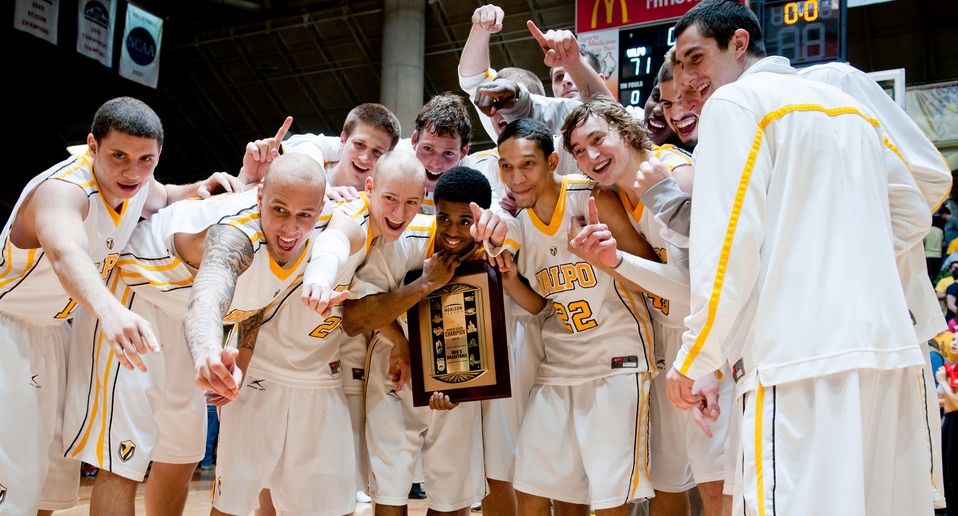 Valparaiso put an emphatic end to a championship regular season on Friday evening, leading wire-to-wire in a 71-59 victory over Butler.  The victory came on Senior Night in front of a sellout crowd of 5,237 and in front of a national television audience on ESPNU.

With one of Valpo’s all-time great teams in attendance to be honored on Friday, the 1961-62 Crusader squad which was the first in program history to advance to an NCAA postseason tournament, this year’s Valpo team showcased why they had already clinched the Horizon League regular season title with one game to play, scoring the game’s first five points and never trailing.

A put-back on the Crusaders’ first possession by Kevin Van Wijk (Hoofddorp, Netherlands/Katholieke Scholengemeenschap Hoofddorp) gave Valpo a lead it would not relinquish, and then just as in Tuesday’s win over Loyola, Will Bogan (Boise, Idaho/Vallivue [Ole Miss]) hit a pair of early 3-pointers to help the team’s opening run.  By the time Ryan Broekhoff (Frankston, Victoria, Australia/Australian Institute of Sport) fed Ben Boggs (Roanoke, Va./Hidden Valley [Virginia Tech]) for a fast-break layup, the Crusaders led 10-2 less than four minutes into the game.

With Butler starting the game by missing its first 12 shots and not hitting a field goal until over nine minutes in, Valpo had plenty of time to add to its game-opening spurt.  While the Crusaders went nearly four minutes without scoring, Richie Edwards (Lakeland, Fla./Lakeland [Hillsborough C.C.]) ended the drought with an old-fashioned 3-point play, and then Boggs converted all three free throws after being fouled on a 3-pointer two trips later to make it 16-2 Valpo nine minutes in.

Butler finally connected from the field on an Andrew Smith putback on its next trip, but the Crusaders maintained a double-digit lead for the remainder of the half.  Valpo pushed the lead up to 15 points with four minutes left in the opening stanza on a 3-pointer by Matt Kenney (Mooresville, Ind./Mooresville), but a buzzer-beating baseline jumper by the Bulldogs’ Chrishawn Hopkins would make the lead just 31-21 at halftime.

The story of the second half was the Crusaders preventing Butler from making any runs at the lead.  Every time the Bulldogs got within single digits, Valpo pushed the lead back above the 10-point threshold.  It was 39-30 after a pair of Khyle Marshall free throws with 14:17 left, but Broekhoff answered with a driving layup to push the lead back to 11 points.

A Marshall layup with just under eight minutes to play cut Butler’s deficit to 49-40, but two trips later, Bogan converted a pair of free throws and then drained a 3-pointer on the next possession to make it 54-41 Valpo with 6:31 to go.  The Crusaders went into the under-four minute media timeout leading by just nine after a Marshall dunk, but Edwards got to the foul line out of the timeout and hit both freebies to extend the lead to 58-47.

Butler had one push left in it, as back-to-back 3-pointers by Ronald Nored and Hopkins sliced the Crusader edge to 60-54 with two minutes to play.  But the Bulldogs fouled on a full-court press out of their timeout, and Bogan again hit two free throws to put Valpo up by eight.  Then, after a Butler miss, Broekhoff grabbed the rebound and led the fast break, eventually hitting Van Wijk underneath for a 64-54 lead with 1:42 to go.  The Bulldogs would not get closer than eight points the rest of the way.

Van Wijk matched his best shooting effort of the season, going 8-of-9 from the floor for a game-high 18 points while also grabbing five rebounds.  Bogan added 14 points and three assists without a turnover, while Boggs chipped in 11 points and five boards.

Broekhoff failed to reach double figures for just the second time this calendar year, scoring just six points, but grabbed a game-high nine rebounds to help Valpo out-rebound Butler, 32-31.  The Crusaders were a stellar 15-of-23 inside the 3-point line on the evening and converted 26-of-33 from the foul line.

Butler (17-13, 11-7 Horizon) was led by 17 points off the bench from Marshall.  Andrew Smith ended the night with 12 points, while Nored scored 11 and handed out eight assists.

Valparaiso (21-10, 14-4 Horizon) has eight days before its next game, as it awaits its semifinal opponent in the 2012 Horizon League Men’s Basketball Championship at the ARC.