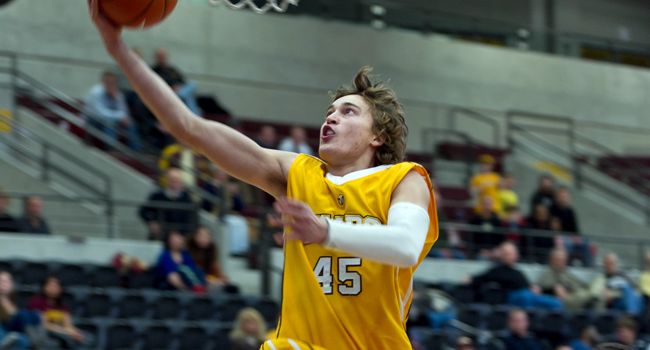 Playing its first-round NIT game with just a six-man rotation, seventh-seeded Valparaiso played right with second-seeded Miami for 36 minutes before the Hurricanes closed out the game with 12 straight points, as the Crusaders fell 66-50 Wednesday evening in Coral Gables, Fla.  Valpo’s season ends with a 22-12 overall record and the program’s first Horizon League regular season championship.

The Crusaders were without the services of sophomore guard Jay Harris (Aurora, Ill./Oswego East), who did not make the trip due to illness, and junior guard Matt Kenney (Mooresville, Ind./Mooresville), who made the trip but was unable to play due to illness as well.  The absence of the duo, who combine to average over 53 minutes per game, forced a number of players to play season-high minutes.

"The score was not an indication of how close the game was,” Crusader head coach Bryce Drew said. “I thought twice today Miami gave us a standing eight count and our guys immediately came right back.  We only have seven scholarship players available and we really didn't have many choices as a coaching staff.  But I was extremely proud of the six guys who played – they gave themselves a chance to win.”

Valpo’s starting backcourt of Erik Buggs (Memphis, Tenn./Mitchell) and Will Bogan (Boise, Idaho/Vallivue [Ole Miss]) both played all 40 minutes for the first time in their careers, while Ryan Broekhoff (Frankston, Victoria, Australia/Australian Institute of Sport) saw 38 minutes of action, one minute off his regulation high.  Richie Edwards (Lakeland, Fla./Lakeland [Hillsborough C.C.]), competing in his home state, played a season-high 32 minutes off the bench as well.

Despite the limited depth, the Crusaders stuck right with Miami in the first half, trailing just 24-23 at the break.  The Hurricanes tried to run away early, hitting four of their first five shots, including a trio of 3-pointers, to go up 11-5 less than three minutes into the game.  But Valpo would limit Miami to just 5-of-17 shooting over the remainder of the half, and just one 3-pointer, as the Hurricanes would score just 13 points over the final 17 minutes of the half.

Meanwhile, Valpo was able to overcome poor shooting on the offensive end to be within one at halftime.  The Crusaders shot just 9-of-27 in the first half, but grabbed seven offensive rebounds for nine key second-chance points.  Trailing 16-11 with under nine minutes to play, an inside basket from Edwards and a 3-point play by Broekhoff tied the game, and another inside basket from Broekhoff gave Valpo its first lead since 2-0 at 20-19 with 3:29 to go in the first half.  Miami answered with the next five points, but the native of Australia canned a 3-pointer with under a minute to go to move the Crusaders within one at the break.

Valpo stayed within striking distance for the majority of the first part of the second half, with a long jumper by Edwards making it a three-point game at 35-32 with 13:06 to play.  Miami went on its first big run to try to seize control at that point, outscoring the Crusaders 13-3 over the next four minutes to take its biggest lead at 48-35 with 9:15 left.

But Valpo countered immediately to move right back into the ballgame.  Bogan knocked down a 3-pointer with 8:45 to go and then Broekhoff canned a triple of his own after a Hurricane miss to immediately cut the deficit to 48-41.  Buggs drained a pair of free throws and then Broekhoff found Edwards inside for a layup to complete the 10-0 run over a two-minute span, which brought the Crusaders back within 48-45 with 6:57 to go.

Miami answered by scoring on each of its next three possessions to push its lead to 54-45 with under six minutes to play, but again the Crusaders wouldn’t go away.  Out of their last timeout, Edwards hit a 3-pointer to bring Valpo within six, and the Crusaders forced three Hurricane misses on one possession on the defensive end before Buggs converted a driving layup to make it 54-50 with 4:23 to go.  But that would be the Crusaders’ last stand, as Valpo would not score again, missing its final six shots as the Hurricanes scored the game’s final 12 points.

Broekhoff tied for game-high honors with 18 points on Wednesday, while filling out the stat sheet with seven rebounds, four steals and three assists.  Edwards came up with 16 points as the Crusaders’ lone bench player, while Kevin Van Wijk (Hoofddorp, Netherlands/Katholieke Scholengemeenschap Hoofddorp) pulled down a team-high 10 rebounds.  Valpo shot just 35.8% (19-of-53) from the floor for the game, including just 5-of-27 (18.5%) from downtown.

“I definitely think fatigue had a little bit to do with the misses from three,” Drew said.  “I think all 27 were pretty good looks. We had a couple that went in and out and a couple that just missed.”

The Crusaders had a pair of entries into their all-time single-season top-10s in 2011-2012.  Broekhoff pulled down 290 rebounds on the year, sixth-most in a single season in program history.  Van Wijk shot 61.7% from the floor, the third-highest field goal percentage in a single year all-time at Valpo.

Meanwhile, Wednesday’s loss closed out the careers of a pair of Crusader senior walk-ons.  Nick Shelton (Frankenmuth, Mich./Frankenmuth) appeared in 40 games over his four seasons, earning a start earlier this season against IU Kokomo.  Meanwhile, Nathan Stegelmann (Goshen, Ind./Goshen) joined the team mid-season this year and played in eight games, including an 11-point effort against IU Kokomo.