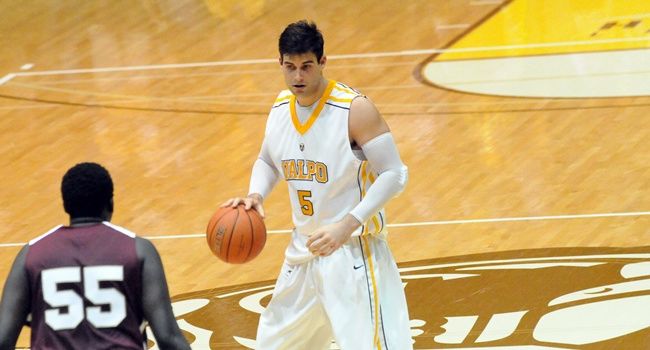 Valparaiso used a 20-3 run to start the second half to defeat Robert Morris (Ill.), which entered the game ranked fourth in the nation among NAIA schools, by a final of 92-64 on Saturday evening at the ARC in exhibition action.  The game was the second of Valpo's two exhibition contests.

“Robert Morris is ranked fourth in the NAIA right now – we knew they were an excellent program and have a lot of very good players, a number of which come from Chicago,” said Crusader head coach Bryce Drew.  “As a coach, I was interested to play them because of their quickness, something that you can't simulate in practice.  I thought the first half, we really struggled with that quickness.  Then, in the second half, we were able to get the ball inside more and get more baskets at the rim.”

After leading by just two at the break, 39-37, the Crusaders ran away with the game in the second half.  Senior Ryan Broekhoff (Frankston, Victoria, Australia/Australian Institute of Sport) started the half off on the right foot with a driving basket and a 3-pointer on Valpo's first two possessions.  The Crusaders utilized the fast break during the 20-3 run, scoring nine points either on fast break baskets or at the free throw line following fouls on the break.

Fifth-year senior Erik Buggs (Memphis, Tenn./Mitchell), senior Kevin Van Wijk (Hoofddorp, Netherlands/Katholieke Scholengemeenschap Hoofddorp) and senior Matt Kenney (Mooresville, Ind./Mooresville) all closed out fast breaks with layups during the spurt, while the Valpo defense held Robert Morris to 1-for-5 shooting and six turnovers in the same stretch.  By the time Buggs converted a layup on a drive down the paint just 5:26 into the half, Valpo led by 19 points at 59-40, having scored 20 points in that time span.

The Eagles would get no closer than 16 points the rest of the way, and Valpo pulled away, capping its lead at the final margin of 28 points on a short-range putback by redshirt junior Bobby Capobianco (Loveland, Ohio/Loveland [Indiana]) in the final minute.  The Crusaders outscored Robert Morris 53-27 over the final 20 minutes, with 30 of those points coming in the paint as well as 20 off turnovers.

It was a first half of momentum swings, as Valpo claimed the first push.  Six different Crusaders scored in a 14-5 run over the game's opening 6:19, capped by a Broekhoff 3-pointer.  But over the next six minutes, the Eagles outscored Valpo by a 23-6 margin to go ahead 28-20 with seven and a half minutes to go in the opening period.  The Crusaders responded with 10 straight points to re-take the lead and would eventually go into the locker room with a two-point lead thanks to a steal and fast-break layup by Kenney in the half's waning seconds.

Capobianco paced Valpo off the bench on Saturday night, scoring a game-high 21 points while also grabbing eight rebounds, six of which came off the offensive glass.  The redshirt junior led four Crusaders in double figures.  Broekhoff scored 15 and added seven rebounds, while Buggs hit 6-of-7 from the floor for 14 points to go with team highs of five assists and four steals.  Van Wijk, who sat out last Saturday's exhibition, saw just 15 minutes of action, but went 5-for-6 from the field for 14 points and six rebounds.

Robert Morris was led by 19 points from Larry Dumas.  Brian Bradley scored 11 for the Eagles, who hit six of their nine 3-pointers in the first half to be within striking distance at the break, while Sean Montgomery added 10 points, eight rebounds and five assists.

“With the guys we had out there tonight, we only had five players who played for us last year,” said Drew.  “There's a lot of combinations that we put out on the floor who have very little experience playing together.  As coaches, we're trying to use these games to help figure out which combinations play well together.”

Valparaiso opens the regular season on Friday, Nov. 9 at approximately 7:30 p.m. as the Crusaders welcome Georgia Southern to the ARC.  Fans are encouraged to wear white to help “White Out” the ARC.  The game can be heard live on the Valpo Sports Radio Network and seen live on the Horizon League Network, with links to both, as well as live stats, available at www.valpoathletics.com.  Live video, stats and interactive chat will be running through www.valpogameday.com as well.