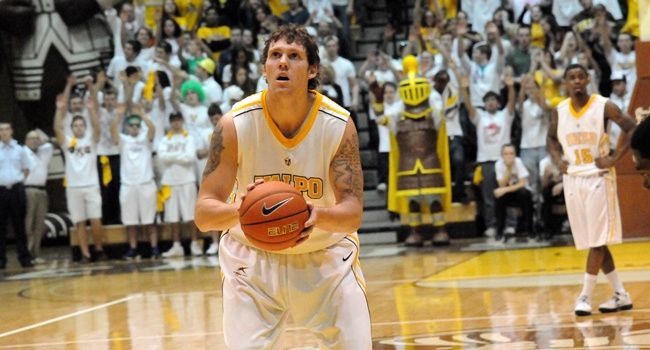 The Valparaiso men’s basketball team earned their first road win of the season with a thrilling 88-83 overtime win Sunday afternoon against Kent State in Kent, Ohio.  Senior Kevin Van Wijk (Hoofddorp, Netherlands/Katholieke Scholengemeenschap Hoofddorp) tipped in a missed free throw with one second remaining to tie the game 75-75 and force an extra session.

“As I looked at Kent State, we knew how good they were coming in and what a great tradition Kent State has had here -- they already had a quality win over Drexel,” head coach Bryce Drew said. “So it is a very big win for our program to be able to come in here and get a win against a team that is very, very good.”

The Crusaders led by as many as 12 and trailed by as many as three in a tightly contested game that featured eight lead changes.  Van Wijk led all scorers with 25 points on 6-of-8 shooting and 13-of-14 from the free throw line.

“I think the tip-in at the end of regulation gave us a second wind,” Drew said. “We had a lot of energy after that, tying it up in overtime, I think helped revive us and we were able to make some shots to start the overtime.”

Kent State cut the margin to three points, but Ryan Broekhoff (Frankston, Victoria, Australia/Australian Institute of Sport) and Ben Boggs (Roanoke, Va./Hidden Valley [Virginia Tech]) hit a pair of free throws each to seal the victory on an afternoon where the Crusaders finished 34-for-41 from the charity stripe.

The Crusaders needed a late rally to force overtime in just the third-ever meeting between the two programs.  Kent State opened up a 71-68 lead with 1:35 to play in regulation.  After a Buggs layup, Kent State’s Bryson Pope committed an offensive foul as Broekhoff drew a charge, giving the Crusaders the ball back down a point with 41 seconds remaining.  Van Wijk drew a foul on the other end and hit two big free throws to give Valpo a 72-71 advantage with 30 seconds left.

Chris Evans hit four free throws after he was fouled on Kent State’s two subsequent possessions, giving Kent State a 75-72 lead with seven seconds left.  On the ensuing series, Buggs was fouled intentionally to prevent a game-tying three-point opportunity. The senior made his first free-throw but missed the second into the hands of Van Wijk, who finished with the put-back deuce.

“We were in a very similar situation on the road in Nebraska where we were down three -- it was the same exact situation,” Drew said. “It’s just the bounce of the ball and the ball happened to bounce our way and Kevin Van Wijk was able to grab it and get the score.”

Valpo raced out to a 36-28 lead at halftime back of 11 first-half points from Broekhoff.  Neither team held a lead greater than four in the first seven minutes and the teams were tied 14-14 at the 13:32 mark in the first half.  Up 20-19 under the 10-minute mark, Will Bogan (Boise, Idaho/Vallivue [Ole Miss]) hit a three pointer from the right wing to trigger a 13-2 Valpo run that gave the Crusaders their largest lead of the game, 33-21.  As the Golden Flashes threatened to seize the momentum heading into halftime, Broekhoff hit a trey to push the Valpo lead to 36-26 with 1:17 left in the half.

Broekhoff scored 15 points on 5-of-10 shooting and was one of four Crusaders to reach double figures, joining Van Wijk and Kenney, who contributed a season-high 16 points and six rebounds. The Crusaders shot just better than 58 percent (25-of-43) in the game.

Buggs also added 15 points, all of which came in the second half or overtime.

“Erik Buggs was in a wheelchair and literally couldn’t walk two days ago,” Drew said. “So for him to come out and have the effort that he did today, I think our whole team fed off of his energy and his heart, to be able to play today and play how he did.”

The Golden Flashes were led by Randal Holt, who poured in 20 points on 6-of-14 shooting. Pope scored 13 points while Chris Evans turned in an 18-point effort.

Valparaiso (3-1) resumes play next Friday with a 7:05 p.m. game against Chicago State at the Athletics-Recreation Center, the second game of the night as part of a four-team pod of the Joe Cipriano Nebraska Classic.  The game can be heard live on the Valpo Sports Radio Network and seen live on the Horizon League Network.  Links to the live audio and live video, as well as live stats, will be available at www.valpoathletics.com.