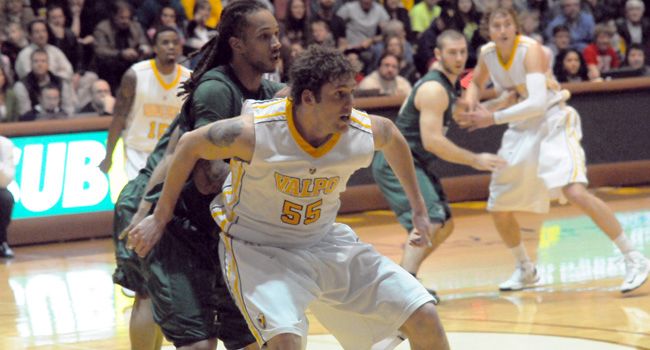 “We knew coming in what a challenge this would be tonight, because of how good Wright State is,” said Crusader head coach Bryce Drew.  “We knew they execute well on offense and play very good defense.  We knew every possession would be valuable tonight, and I’m really proud of our guys.  We were able to keep the lead and I thought that was big – Wright State kept getting close, but somebody always came up with a big shot.”

With the win, the Crusaders remain 1.5 games up on Detroit in the league standings, which also won on Tuesday night, and are now 2.5 games clear of Wright State while also holding the tiebreaker over the Raiders.  The win also was the 20th of the season for Valpo, which now owns a 20-6 overall record and has won at least 20 games in 13 of the last 20 seasons, including each of the last three years.

Just like Saturday’s game at Cleveland State, Valpo led start-to-finish on Tuesday against the Raiders, but in a much tighter game.  The Crusaders held just a three-point advantage as the game ticked under the four-minute mark, but got a pair of defensive stops as Wright State attempted to cut the lead further, as senior Ryan Broekhoff (Frankston, Victoria, Australia/Australian Institute of Sport) blocked a shot and then grabbed a defensive board on the next possession.

Following Broekhoff’s defensive board, the Crusaders ran some clock before Kenney fed Van Wijk in the post for a layup with 2:30 to play to make it 62-57.  WSU responded with a second-chance basket on its next possession, closing to within 62-59 with 1:56 remaining, but Valpo again got the ball to Van Wijk underneath.  The senior was fouled with 1:29 to play and calmly stepped to the free throw line, hitting both attempts to increase the lead to 64-59.

Broekhoff then came up with another big defensive play, blocking AJ Pacher’s layup attempt with 1:19 to go to give the Crusaders possession with the five-point advantage.  Following a timeout, Valpo ran the shot clock most of the way down.  Kenney ended up with the ball in his hands in its waning seconds, bringing the ball left to right across the top of the key before squaring up a jumper from the right elbow.  The senior drilled the 16-footer, pushing Valpo’s edge to 66-59 with 44.7 seconds to play.

Pacher converted an inside basket for the Raiders with 32 seconds left to move WSU back within five points, and the Raiders regained possession following a Valpo turnover seven ticks later.  But the Raiders missed their next effort, and Kenney grabbed the board and hit two free throws with 14 seconds to play for the final margin as Valpo improved to 5-1 on the road within Horizon League play this year.

The Crusaders got off to another quick start Tuesday, as Broekhoff opened the scoring with a 3-pointer and then had a putback 6:26 into the game to give Valpo an 11-4 lead.  After the Raiders closed back within two at 11-9, Van Wijk scored four points and senior Ben Boggs (Roanoke, Va./Hidden Valley [Virginia Tech]) five in a 9-1 spurt which put the Crusaders ahead 20-10 just over ten minutes in.

Wright State rallied, making it 22-19 with 7:17 left in the first half, but the Crusaders reeled off ten straight points over nearly a five-minute stretch to make it 32-19.  Four different Crusaders scored during the run, including a 3-pointer from fifth-year senior Will Bogan (Boise, Idaho/Vallivue [Ole Miss]) and an old-fashioned 3-point play by fifth-year senior Erik Buggs (Memphis, Tenn./Mitchell).  Valpo still led 34-22 with 2:09 to play in the opening period after a basket by Buggs, but the Raiders scored the final six points of the first half to make it a six-point Crusader lead at the break.

An inside hoop from Van Wijk and a baseline jumper by Bogan made it a double-digit lead once again less than two minutes into the second half, but most of the final 20 minutes was played within single digits.  Four times during the middle stages of the half, Wright State would rally to within one possession, but each time Valpo was up to the challenge.

Kenney answered a Reggie Arceneaux 3-pointer with a trifecta of his own with 11:24 to play, making it 51-45 Crusaders.  After Wright State scored on each of its next two trips, Van Wijk drew a foul and converted both free throws to push the lead back to four points with 9:48 remaining.  After a second-chance basket by the Raiders, Broekhoff drilled two free throws to again make it a four-point lead, and Kenney got to the line once Wright State made it again a two-point game with under six minutes to play, knocking down both free throws as the final stretch approached.

Van Wijk led the Crusaders with a stellar inside effort on Tuesday, finishing with 20 points and matching his season high with nine rebounds.  It marked the fourth 20+ point game of the year for the senior.  Kenney added 15 points off the bench, 13 of which came in the second half, as well as five rebounds and three assists.  Despite a rough night from the field, Broekhoff also finished in double figures with 10 points.

“I thought Kevin was sensational tonight,” said Drew.  “Wright State plays some of the better defense in the country, but Kevin hit some tough shots and really posted up hard.  He also grabbed nine rebounds for us - it was definitely one of his best efforts of the year for an all-around game.”

Wright State (17-9, 8-5 Horizon) received a career-high 23 points off the bench from Pacher, while Miles Dixon was the only other Raider in double figures, also coming off the bench with 13 points.  The Crusader defense limited WSU to just 3-of-13 (23.1%) shooting from 3-point range as the Raiders were 23-of-55 (41.8%) overall from the floor.

Valparaiso (20-6, 10-2 Horizon) looks to clinch at least a share of its second consecutive Horizon League regular season championship on Saturday as the Crusaders host Detroit at the ARC.  The game is slated for a 5 p.m. tip and will be broadcast live nationwide on ESPN2 as part of Rivalry Week.  As always, the game can be heard live on the Valpo Sports Radio Network as well, with links to both, as well as live stats, available through ValpoAthletics.com.

ValpoGameday.com will also be open, featuring a live interactive chat as the game is played.  Tickets are still available and can be purchased online by visiting http://www.valpoathletics.com/tickets/ or by calling the Valpo ticket off ice at 1-877-MY-VU-TIX.