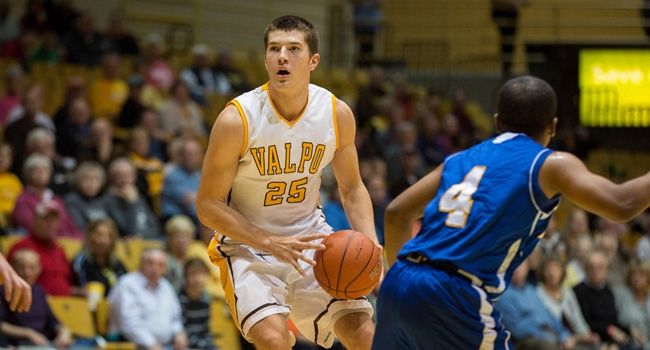 A 30-point performance from freshman Alec Peters (Washington, Ill./Washington) wasn’t enough for the Valparaiso men’s basketball team to complete a comeback from a 27-point deficit Wednesday night, as the Crusaders fell by a 100-92 final at Evansville.

Peters ended the night 10-of-15 from the field, including a 7-of-11 effort from behind the 3-point line.  The seven 3-pointers were the most by a Crusader in a single game since Ryan Broekhoff connected on seven triples last season at Milwaukee.  The 30-point night ended a tumultuous 3-day span for Peters, who learned his hometown had been devastated by Sunday’s tornadoes shortly after the Crusaders’ loss at Ohio and proceeded to return home on Monday to assist in recovery efforts.

Trailing by 25 at the half, the Crusaders surrendered the first basket of the second half, and still faced a 27-point deficit at 65-38 with 16:53 to play following a 3-pointer by the Purple Aces.  Valpo proceeded to make its first push at getting back into the ballgame, putting together a 16-2 run over the next five minutes to cut the deficit to 13 points.  Jordan Coleman (N. Hollywood, Calif./Calabasas [Southwestern Ill. College/Hawai’i]) and Clay Yeo (Bourbon, Ind./Triton) both scored five points during the spurt, the latter capping it with a triple and a fast-break layup.

Evansville would respond with the next nine points to push its lead back to 22 points at 76-54 with less than nine minutes to play, as Valpo went scoreless for a four-minute stretch.  But a layup from Jubril Adekoya (Tinley Park, Ill./Andrew) snapped the skid and propelled the Crusaders on another run.  Peters connected on a pair of 3-pointers and also had an old-fashioned 3-point play, while a fast-break dunk from Coleman forced a timeout from the Aces as the 15-5 run brought Valpo within 81-69 with five minutes remaining.

Evansville’s D.J. Balentine hit a pair of free throws to briefly stop the Crusader momentum, but two trips later Peters connected on a 3-pointer.  Then, following a pair of misses from the charity stripe by the Aces, the rookie from Washington nailed another triple to make it an 83-75 game with 3:33 to go, the first time the Crusaders had been within single digits since 10 minutes into the game.

The Purple Aces scored the next five to push their lead back to 13 points, but LaVonte Dority (Chicago, Ill./Foreman [USF]) hit a 3-pointer of his own and then answered a pair of free throws with a driving layup with 1:41 to play.  Evansville split two free throws on its next trip, and again Peters stepped up, hitting his seventh 3-pointer to make it 91-83.

Dority then came up with a big defensive play, stealing the ball at halfcourt and getting fouled, converting two free throws with 1:13 to go, making it a six-point game.  But the Crusaders were unable to make it any closer than a six-point game down the stretch, despite twice closing back to within six on two more Dority free throws and a 3-pointer from Bobby Capobianco (Loveland, Ohio/Loveland [Indiana]), as Evansville went 9-of-12 from the foul line over the final 73 seconds.

For the third consecutive game, Valpo faced a double-digit deficit early in the game, as back-to-back layups by Jaylon Moore gave Evansville a 16-6 lead just 5:36 after the opening tip.  Then, over the final 10 minutes of the half, the Purple Aces had separate runs of 15-4 and 16-4 as they went into the locker room with a 55-30 lead.

Two other Crusaders joined Peters in double figures on Wednesday, as Dority scored 17 points and Coleman added 12 points.  Valpo was very effective on the offensive end against the Purple Aces, connecting on 61.4% (35-of-57) from the field, including a 12-of-25 effort from 3-point range.  Adekoya picked up a team-high six assists despite playing just 14 second-half minutes, while Moussa Gueye (Thies, Senegal/SEED Academy [Alabama/Lake Land (Ill.) College]) picked up four of the Crusaders’ seven blocked shots.

For as effective as the Crusaders were offensively, Evansville (4-0) was even more so, hitting 61.1% (33-of-54) from the floor and 75% (9-of-12) from 3-point range.  The Purple Aces also took advantage of 34 trips to the foul line, hitting 25, as compared to 10-of-15 for Valpo.  Balentine led all players with 32 points to lead five Evansville players in double figures.  Duane Gibson finished the night with a double-double of 12 points and 10 assists as well.

Valparaiso (2-3) returns home for a four-game homestand, beginning on Saturday afternoon against 2013 NCAA Tournament qualifier James Madison.  Tipoff is slated for 2:05 p.m., and all the action can be heard live on the Valpo Sports Radio Network or seen live on the Horizon League Network.  Links for the live audio and video, as well as live stats, will be available at ValpoAthletics.com.